According to the eCom Cash Bot, you could be earning up to $2,000 per day starting today. 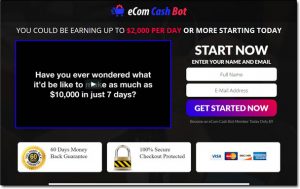 You’re led to believe that all you need to do is simply sign up, activate the bot & that you’ll then begin earning money pretty much all on complete autopilot.

But in order to sign up, you have to hand over $9 of your own cash first.

So is the eCom Cash Bot legit?

Or is eCom Cash Bot a scam that will just see you losing money instead of actually making it?

Well, you’ll be glad that you came to this eCom Cash Bot review before you spent any money because as you’ll soon see it’s NOT what it seems & the typical purchaser does not make any money.

What Is eCom Cash Bot?

eCom Cash Bot portrays itself as an automated robot that has been designed to enable people to launch their own profitable & automated eCommerce stores with the click of a button.

So as a visitor to the eCom Cash Bot website you’re led to believe that you can simply sign up, press a button & have the robot build you a store that begins making you money all by itself.

And not just any money either…

The eCom Cash Bot claims that it can set you up with a store that will see you earning $2,000 per day, right from the same day that you get started.

But of course, there’s a catch.

The catch is that in order to get started with the eCom Cash Bot & try it out, you first need to hand over $9 of your own hard-earned cash.

And this is where things get pretty shady.

I mean, if the eCom Cash Bot could really enable people to earn money so easily then why is the creator of it requiring you to hand over $9 in order to get access?

It doesn’t add up.

The reason, of course, is because the eCom Cash Bot does not really work as promised.

Instead, the eCom Cash Bot is just a scam & the only person earning money from it will be the creator, at the expense of those who pay the money to try it out.

There are a couple of reasons I can say that so confidently.

The first reason is because the eCom Cash Bot disclaimer literally states that the typical purchaser does not make any money, as shown in the screenshot below:

And on top of that, I’ve actually already exposed the eCom Cash Bot scam several times before. The person behind it simply keeps on changing the name of it.

Some of its previous names include eCom Cash Crusher & eCom Cash Code.

How Does eCom Cash Bot Work?

Basically the eCom Cash Bot just features a hyped-up sales pitch which has been designed to trick you into handing over some of your cash in order to try it out.

Once you do actually hand over your cash, however, (which I don’t recommend doing), you’ll just be left to find out that there isn’t actually any “bot” at all.

All you actually get access to is some extremely basically training on starting your own eCommerce store & selling products through a method known as dropshipping.

The training tells you to do the following:

But there are a few problems with this.

Firstly, there’s the problem with the training itself.

You see, dropshipping is actually a legitimate way to earn money online, but in order to find success with it, you need high-quality training & the eCom Cash Bot fails to provide that.

On top of that, whilst the method itself may be legitimate, it’s not a method I would recommend pursuing.

The reason I say that is because dropshipping involves a LOT of work. You’ve got to source products, list them for sale, process orders, deal with refunds, handle support, etc.

Instead of doing that, a much better method to pursue, in my opinion, is affiliate marketing.

With affiliate marketing, you don’t need to deal with all of that stuff & you can still make the same amount of money. In fact, you can actually make more money.

Affiliate marketing simply involves you promoting the products on behalf of companies (such as Amazon) in return for commissions.

There’s no need to mess around with support, refunds or anything like that because the companies whose products you’re promoting handle it all on your behalf.

The other problem with eCom Cash Bot is the costs involved, including the hidden costs behind the scenes which could set you back hundreds of dollars.

You see, despite the eCom Cash Bot claiming to only cost $9, that’s just the “entry fee”.

That’s basically just put in place so that they can get your credit card details on file because after that there are some more costs, all of which are billed with 1-click.

The additional upsells are said to be “optional”, but unless you purchase them you’re left to feel that you’re not getting access to the full program & that your chances of success will be minimized.

So in short, the optional upsells are mandatory, and they are as follows:

And even if you did purchase these additional parts of the program (which I absolutely don’t recommend), you would still be unlikely to see any success with it.

They are just further hyped-up tricks to squeeze even more money from you so that the creator can line his (or her) own pockets at your expense.

If you’re new to earning money online then a system like the eCom Cash Bot can quite easily seem plausible, and for $9 you might be very tempted to try it out.

But let me highlight some of the red flags here.

First, there’s the fact that as I mentioned towards the beginning of this eCom Cash Bot review, the disclaimer literally states that the typical purchaser does not make money as shown below:

Then, there’s the fact that I’ve already seen the eCom Cash Bot scam launched under different names in the past such as eCom Cash Crusher & eCom Cash Code.

On top of that, the creators of the eCom Cash Code have even hired paid actors from Fiverr to pretend to be real users claiming to have made money with the program.

Would you really want to hand money over to buy into a program which uses such shady tactics?

Is eCom Cash Bot a Scam?

Yes, as far as I’m concerned, the eCom Cash Bot is a scam. The reason I say that is because it’s misleading & will ultimately result in you losing money, not making it.

The creators of eCom Cash Bot have quite clearly over-hyped their program & made it seem like you’ll be able to use it to make lots of money quickly & easily but that’s simply not true.

As their extremely small disclaimer states, the typical purchaser will not make any money.

And as I mentioned further up in this eCom Cash Bot review, even if the training provided was indeed high quality, I still wouldn’t recommend the method of dropshipping (which is what the eCom Cash Bot teaches).

The reason is because whilst dropshipping is legit, it requires a LOT of work.

There are alternative methods like affiliate marketing which you could use to generate the same amount of income with less work & less to have to manage.

You see, with dropshipping you have to focus on finding products, generating sales, handling support, processing refunds, etc.

With affiliate marketing, however, you only have to focus on one thing – promoting. You send people to products, they make a purchase, you get paid a commission.

You can learn more about affiliate marketing (or get started with it over at Commission Academy).

But whatever you decide to do I hope that you found my eCom Cash Bot review here helpful & I hope it helped prevent you from falling victim to the scam.