Income Sites Online claims that you can just copy a so-called “free weird trick” to begin making $1,000 per day online even if you’ve never actually managed to make so much as a single penny online before in the past… 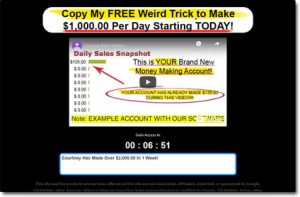 But could it really be true? Or is Income Sites Online a scam that you should just avoid?

What Is Income Sites Online?

Income Sites Online is a newly launched “make money” website that essentially promises you the opportunity to just sign up & profit without having to do anything or put in any real effort at all, which might sound like a dream come true.

The website promises that you can literally just “copy a free weird trick” and begin making $1,000 with ease right from the very same day you get started…

But if that’s true then why isn’t everybody doing this?

Why are people still working at jobs they dislike if they can just sign up to Income Sites Online & make $1,000 per day every day so easily without having to do anything?

And why are people like me who make a living online still taking time to write blog posts like this to make money if it can be done so easily without actually having to do anything instead?

The answer of course is because the things that you’re told by Income Sites Online are NOT true, and the reason I can say that so confidently here right from the off is because I’ve actually seen this website several times before.

The truth is that it’s just a get-rich-quick scam (as you’ll soon see below when I explain how it all works) & the person behind it simply keeps changing the name of it in an attempt to escape the negative reviews so that he/she can trick more people into joining.

Some of its previous names include Copy My Websites & Quick Home Websites, and if you check out my reviews of those then you’ll see that the websites are actually almost identical. Only the names change but the scam remains the same.

So how does the Income Sites Online scam work? And can you make ANY money with it at all? Keep reading to find out…

How Does Income Sites Online Work?

Basically the Income Sites Online website is just your typical get-rich-quick scam in that it makes extremely over-hyped promises, requests you to hand over your money to “get started” & then fails to deliver on its promises once you do.

You see despite Income Sites Online claiming to be free, it’s not – instead you actually hand over $47 just to get access, and then there are several more upsells on the inside which could set you back hundreds of dollars.

Plus I also noticed on the Income Sites Online payment page that they forgot to change the name from Website ATM, which was one of the other previous names of this scam (as shown below):

So that’s clearly a red-flag in its own right, but I know what you’re likely wondering – what do you actually get in return for your money?

I myself actually make over $10,000 per month from affiliate marketing (you can see how here).

So the problem isn’t with affiliate marketing itself, the problem is with how the Income Sites Online website over-hypes it, makes it seem way easier than it actually is & then provides you rubbish training that won’t really help you whatsoever.

I mean yes, anybody can find great success with affiliate marketing but you need good training, like that found at Wealthy Affiliate.

And just in case you don’t know, let me explain – affiliate marketing basically involves you connecting people with products or services that they’re looking for & getting paid commissions in return.

So let’s say you sign up as an affiliate of Amazon, you’d get a special unique link to the products on their website & if somebody clicked on your link & then bought something you’d get paid a commission in return (as shown below):

It’s a truly fantastic way to make money online and anybody can definitely do it, but it is not something that will make you rich quick like the Income Sites Online website promises (there is no such thing).

Anything that promises it will make you rich quickly is just likely set out to scam you.

Instead if you want to find success with affiliate marketing then you must be prepared to put in the work to make it happen, and you must also appreciate that it is not going to happen overnight.

The good news though is that if you are prepared to put in the work to make it happen then like I mentioned above you can get started with it for free over at Wealthy Affiliate (which is a legitimate place to learn).

And just in case you’re still thinking about trying out Income Sites Online despite what I’ve said above, let me point out some of the red-flags which flat-out PROVE that it doesn’t work as promised to help you save your money…

The Red-Flags That Scream “Scam”

First of all there’s the fact that as I mentioned in the previous section of this review the Income Sites Online payment page still mentions the Website ATM scam which was a previous name the scam was operating under.

A legitimate website/system would not need to change it’s name so frequently. The person behind it is just doing that so that he/she can attempt to escape the negative reviews to continue parting people with their cash.

But on top of that there’s also the fact that the website literally states in the disclaimer that “The typical purchaser does not make any money using this system” as shown below:

So despite making extremely bold claims telling you how great it is & how easily you’ll make money, the disclaimer states that the average person who buys it actually does NOT make any money with it… Which screams scam!

Therefore hopefully you can see why you should just save your money, which brings me onto…

Is Income Sites Online a Scam?

Yes, in my opinion Income Sites Online is definitely a scam & the reason I say that (even though they do give you “some” training) is because the website is simply extremely misleading & what you purchase is NOT what you were promised.

The website states that you’re going to be getting a “free weird trick for making $1,000 per day” but you’re not. It’s not free since it costs $47 and as the disclaimer on their website states, “the typical purchaser does not make any money”… Therefore the whole thing is a lie.

In reality the whole thing has just been setup to make its creator wealthy at your expense & it’s not really about helping you at all.

The truth is though like I mentioned earlier in this review you can actually make good money through affiliate marketing (which is what the Income Sites Online website is loosely based around). It’s just that in order to make money with it you need proper training like that found at Wealthy Affiliate.

So rather than messing around wasting money on the Income Sites Online system I recommend that if you really want to make good money with affiliate marketing you just join a proven program like Wealthy Affiliate instead.

Or alternatively you can check out these other great ways to make money too.

But whatever you decide to do I just hope that this review of Income Sites Online has given you a good insight into how it really works & hopefully you can now see why it’s a system that should be avoided. Feel free to leave any questions or comments below. 🙂