The brand-new Website ATM system (currently located at cmsystemstz.pw) promises to provide you with access to a super-easy way of making money online which will allegedly see you earning as much as $500 per day, even if you’re completely brand new… 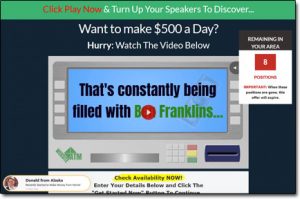 You’re led to believe that all you need to do is simply sign up & that you’ll begin making money pretty much on auto-pilot right away.

But in order to actually sign up, you’re required to hand over some of your own cash first… So what’s the truth? Is it really legit or will the Website ATM scam you instead?

Thankfully you’ve landed in exactly the right place to find out as I myself have personally taken a closer look into this system & in this honest Website ATM review, I’ll be uncovering everything you need to know, including how it all works & whether or not you can really make any money with it. 🙂

The Website ATM system basically portrays itself as being some sort of “done-for-you” money-making system & it leads you towards believing that you’ll just be able to simply sign up & begin making hundreds of dollars per day with ease.

The creator of it (who coincidently remains anonymous) even claims that you can make $500 the very same day that you get started… However in order to actually get started, surprise surprise you’re asked to hand over your own money first.

But if you do hand over your money to “try it out”, will you actually be able to make money back?

Does the Website ATM system really work as promised?

Well, the short answer to those questions is no – and the reason I can tell you that so confidently is because the Website ATM system is actually nothing more than a scam & it’s one that I’ve seen before.

When I last seen it was named the MSW System, which stood for Money Sucking Websites & if you read my review of that (or take a look at the screenshot I’ve included below) then you’ll see that the two websites are almost identical, with only a few changes. 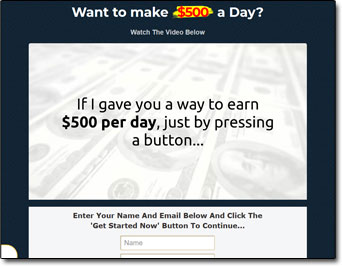 The reason the person behind it has changed the name is just to attempt to escape the negative reviews that were written so that he (or she) can continue the scam & continue parting people with their hard-earned cash.

But I do appreciate the fact that you’re probably not just wanting to “take my word for it” when I say that – after all, I understand the promise of being able to easily make $500 per day is pretty darn tempting… So instead keep on reading & I’ll show you exactly how it all works so that you can see first-hand for yourself why you won’t actually be able to make money with it…

Basically the Website ATM system is just your typical get-rich-quick style scam in that it promises the world, forces you to hand over your cash to get access & then just fails to deliver on any of its promises on the other side.

The worst part is that its part of something called the EasyKits scam, which could end up costing you over $2,997…

So what you’re promised in the Website ATM video is that you’ll be getting access to a done-for-you website which will be already set up & configured ready for you to begin earning with – but that’s only partly true.

Yes, they do indeed provide you with a “done-for-you” website, but in reality, it’s more a website template than anything else – and it’s the exact same template that’s being provided to every other member who signs up too.

This means that all of the sites are duplicates, and you’ll find it next to impossible to make money with a duplicated site.

But that’s just the beginning of the scam because what they don’t tell you is that whilst they do give you a website, they don’t give you anywhere to host it & so instead, they’ll then pressure you into signing up for stupidly expensive web hosting (which they earn a commission off).

Basically the people behind the Website ATM scam are just trying to sucker as much money out of you as possible & that’s why they recommend the stupidly expensive hosting – just so that they can get a commission.

And Here’s Why You Won’t Make Money With It…

The whole concept of it is loosely based around affiliate marketing, which in itself is actually a legitimate way to make money online. It basically involves you promoting products for 3rd party companies like Amazon & getting paid commissions in return.

Affiliate marketing is very good, and it’s actually the same way I make most of my own money online…

However the problem is that whilst the Website ATM system provides you with a website, it doesn’t provide you with visitors – and these are what you need to actually be able to make money.

You could have the best website in the world but if nobody is visiting it then you won’t earn a penny.

And this brings me back to the issue I mentioned earlier in this review about the websites being duplicates – because one of the best ways to get free visitors to a website is from search engines like Google, but search engines don’t list duplicate websites.

I mean why would they? Why would they take up space in their results & annoy their users by listing identical websites? They don’t – they only list the original… Which means getting visitors from search engines will be out of the question.

So the push is on using paid advertising to promote your website, and I can tell you that this is not only very expensive, but it’s also VERY risky – especially if you’re brand new to online marketing, and especially if you have a crap website like the one provided by the Website ATM system.

But the creators of the Website ATM scam don’t care whether you make or money or not – all they’re bothered about is making money from you instead, and that’s why if you want to progress & actually learn how to get visitors to the site you’ll be required to spend at least another $997.

Thankfully though there’s no need to spend that kind of ridiculous amount of money to get started online as there are other legitimate places where you can get started properly for free, such as Commission Academy.

Back To The Good Old Saying

I mean yes, you can make good money online, you can even make a full-time income online – but it is not going to happen for you automatically or with ease… Because if it did, then everybody would be doing it.

The truth is that if you really want to be able to make good money online then you must be prepared to put in the work to make it happen. The good news though is that if you are, then like I mentioned a little bit above there are legitimate places you can get started like Wealthy Affiliate.

Sure it’ll take work, and sure it’ll probably take a little while before you actually start earning – but building an income online is one of the best decisions you can make because not only can it give you money freedom, but it can give you time & location freedom too.

You can work from where you want when you want… And in my opinion that is most certainly worth the work.

So if you’re interested in doing that (legitimately) then be sure to check out my free guide on starting a website that makes money here.

But anyway, back onto the Website ATM system, it’s time for…

Yes, it is, there’s absolutely no doubt about it. I mean sure, they’ve tried to cover themselves by actually giving you access to “some training” and “some website” but there’s simply no way that the whole thing lives up to its promises & it’s VERY unlikely that you’ll find yourself making any money with it.

Instead of making money with the Website ATM system, you’ll be much more likely to just find yourself spending money – and it’ll just the be the scammer behind the whole thing that ends up getting rich at your expense.

For that reason, I will be strongly advising that you steer clear of the Website ATM scam & instead, if you still want to make money online then I suggest you stick with a legitimate & proven program like Commission Academy.

Either way, whatever you decide to do I just hope that my honest Website ATM review here has given you a good insight into how it all really works & more importantly I hope it has helped you to save your hard-earned cash.

If you do however happen to still have any further questions or comments then don’t hesitate to leave them below & as always I’ll do my best to respond back to you as quickly as I can. 🙂