The Infinity App which also goes under the name of The Unlimited System or Infinity App Club is a piece of automated trading software & it promises that it can generate its user’s profits of thousands of dollars per day all on complete autopilot. 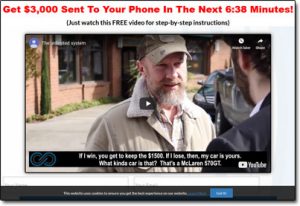 Visitors to the Infinity App website are led to believe that they can literally just sign up, make a small deposit & then activate the system in order to begin making money right off the bat.

Can you really make money so easily? Or is the Infinity App a scam that you should just avoid?

Well, you’ll be glad that you came to this Infinity App review first before signing up because what I can tell you here right from the off is that the Infinity App is NOT what it seems.

What Is The Infinity App?

The Infinity App, which as mentioned above also goes by the name of The Unlimited System basically portrays itself as being an automated trading system & you’re led to believe that it’ll essentially just generate you money all on complete autopilot.

The creator of it who you’re told is named Mark Stevenson states that literally all you need to do is sign up to his system, make a small deposit with the broker that he recommends & then “activate it” to begin making money. 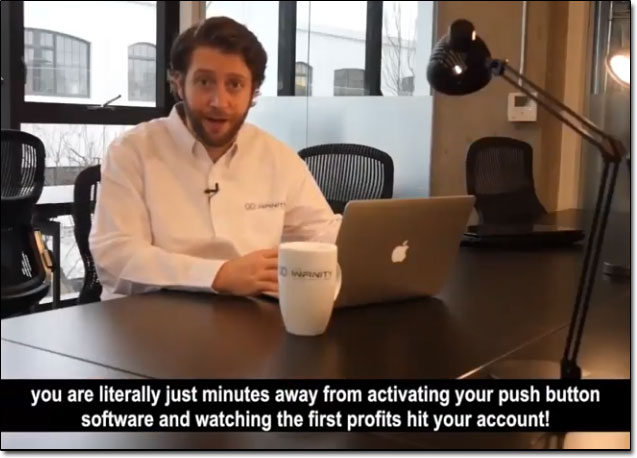 But I know what you’re probably thinking… What’s the catch? Because it just sounds WAY too good to be true right?

I mean if this Infinity App Club really worked then why isn’t everybody using it? Why are people still stuck working at jobs they dislike for less money if they can just “activate” the Infinity App & earn more without actually having to do anything?

Well, the answer, in short, is because the whole thing isn’t real… It’s a scam.

And the reason I can say that so confidently right from the off is that the Infinity App Club is actually a scam that I’ve seen several times before. The creator just keeps changing its name & appearance in an attempt to escape the negative reviews & trick more people into signing up.

Some of its previous names include Green Tree Profits, Bitcoin Superstar, Golden Profit & The News Spy. The names may change but the scam remains exactly the same, and I’ll show you how it all works (or should I say doesn’t work) next…

How Does The Infinity App Work?

So the concept is that the Infinity App has allegedly been built on an algorithm which means it can accurately predict profitable trades, and alongside that, it can also make those trades on your behalf… Therefore you’re basically led to believe it’ll provide you with a way to “print cash”.

But in reality, it’s not true, the whole thing is just a hoax – it’s all a ploy to trick you into depositing with an unlicensed binary options broker.

You see there’s one very important thing that the real creator of the Infinity App fails to tell you & that’s the fact that he’s affiliated with the broker that he “recommends”, which means he gets paid a commission when you deposit.

There’s a mention of it in super-small hard to read font at the very bottom of the Infinity App website (as shown below) but other than that, nothing…

So the whole Infinity App is just a fake & everything you’re told on the website is a lie. The whole thing has literally just been built to trick you into depositing with the broker so that the creator can earn a commission at your expense.

But it gets worse…

You might be thinking that after making a deposit you’ll just be left to find out the hard way that the whole thing doesn’t really work as promised but that’s not the case. The creator is actually much more cunning than that.

You see he HAS actually created a system, but it isn’t really connected to any live markets… It’s just a fake system that replicates a real trading platform but makes it seem like you’re actually generating profits.

The creator knows that if he can make you think you’re profiting you’ll be likely to make more deposits, and that’ll mean he can earn even more commissions… So he’ll try to get you to deposit more & more.

Sadly you’ll only get to find out the whole thing has been a con when you finally go to make a withdrawal & realize that the broker won’t process it. They’ll either ignore your request, point-blank refuse it or claim that you need to pay even more in order to release it (which is just another way sucker even more cash from you).

Unfortunately, the broker is unlicensed, unregulated, and in on the scam… The whole thing is a big fat con from start to finish… And whilst it was made to seem “risk-free”, hopefully, you can now see that it’s certainly not.

The entire thing is a RISK.

Remember I said a little bit above in this review that the creator of the Infinity App is getting paid commissions by the broker? Well, this in itself proves that the whole thing doesn’t really work as promised.

The reason I say that is because binary options brokers (which is what you’re recommended via the Infinity App) work differently to most other brokers. They don’t add fees to their trades & instead they make their money when you LOSE money.

If you win money they actually lose money, so it’s in their interests for you to lose…

Now think about this for a second, if the Infinity App (aka The Unlimited System) was really providing a way for people to generate guaranteed profits then why on earth would the broker be paying the creator commissions?

They wouldn’t, no way – because it would put them out of business.

Is The Infinity App a Scam?

Yes, the Infinity App, Infinity App Club or The Unlimited System (whatever name it is currently going under) is definitely a scam. The entire thing is built upon lies & it is purely set out to part you with your hard-earned cash.

This system & any others like it should be avoided completely. Yes, it is possible to make good money online but no system or program is ever going to see you getting rich without you having to do anything. That’s just the definition of a get-rich-quick scam.

If you truly want to make good money online then you must be prepared to put in the work to make it happen. You can indeed make a full-time income online but you can’t expect it to just fall into your lap.

The good news though is that if you are prepared to put in the work required then there are many legitimate ways you can make good money.

One of the best ways, in my opinion, is something called affiliate marketing (and that’s the same way I make most of my own money online). It basically involves you promoting third party products or services & getting paid commissions in return.

If you want to learn more about affiliate marketing or get started with it then you can do exactly that over at Commission Academy.

Whatever you decide to do though I just sincerely hope that my honest Infinity App review here has given you a good insight into how the system really works & hopefully it has helped to prevent you from losing your cash.

If you still happen to have any questions or comments then don’t hesitate to leave them below. 🙂