In this review, I’m going to be taking a closer look at the Internet Wealth Biz system (found at internetwealth.biz) which is something that claims it can help you generate upwards of $3,384 per day online using nothing but free tools. 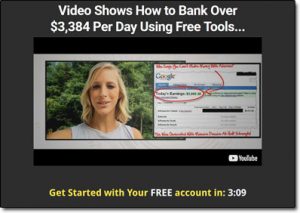 You’re even told that the system has been designed to enable complete newbies who are barely able to even search the internet to make money.

But is it actually legit? Or is the Internet Wealth Biz a scam that’s just set out to take your money?

Let’s find out once & for all…

What Is Internet Wealth Biz?

The Internet Wealth Biz program has been supposedly put together by a guy named Brian Thompson who claims to have generated millions of dollars online through internet marketing – but he also claims that until now he’s kept his name completely hidden.

I can certainly confirm the latter part of that statement is true because I’ve certainly never heard of a millionaire internet marketer under that name which is pretty strange considering I’ve worked online in the same industry for over 5 years.

Anyway – Brian claims that in just 20 minutes of signing up to the Internet Wealth Biz you’ll be able to pretty much duplicate his results & start earning money for yourself online by promoting various affiliate products.

But the strange thing about this is that throughout the video the “income proof” screenshots you were shown were actually of Google Adsense accounts which has nothing to do with affiliate marketing at all.

How Does Internet Wealth Biz Work?

The truth is that system doesn’t really work as promised – there are no easy shortcuts to making large amounts of money online like you’re led to believe & the Internet Wealth Biz system has clearly been put together to simply part you with your cash.

Whilst you can certainly make money online it will initially take some time & effort to get the ball rolling – you can’t just “plug into a system” and start making money if you could then everybody would be doing it.

I’ve seen several similar systems to this one such as the $500 Cash Club system & the Retired Millionaire scam – they are all just scams that prey on people who are new to making money online & don’t quite know how it all works.

Basically, these types of programs attempt to draw you in by getting you hyped up about the potential of earning quick & easy money online but after handing over your cash you’ll be left to find out what you get isn’t really what was promised to you.

You’re led to believe that you can simply buy into the Internet Wealth Biz system for $47 and start making money almost right away but that’s simply not true – instead of after buying in you’ll merely be provided with some training that teaches you the basics of making money with affiliate marketing.

And that’s training that you can actually get elsewhere for free – like at Commission Academy for example.

Don’t get me wrong you can actually make good money through affiliate marketing – it’s actually the same way that I personally make my own income online, but the training provided through the Internet Wealth Biz program is very low quality & well overpriced.

Not to mention the fact that they’re basically selling you into their program on a complete pack of lies.

But through affiliate marketing you’re able to get paid commissions for promoting 3rd party products online – so, for example, you could recommend a product from Amazon (or any other company that has an affiliate program) & earn money if somebody buys it as a result of clicking your link.

Some of the top affiliate marketers do make incomes of over $3,384 per day but I can almost guarantee you that there’s no way that will happen as a result of following the training provided by the Internet Wealth Biz.

I mean just take a look at the disclaimer found on the bottom of their website:

That’s right, despite the creator of this system claiming that it can easily generate you thousands of dollars on complete autopilot, funnily enough, the disclaimer states that the typical purchaser doesn’t even make a single penny.

Is Internet Wealth Biz a Scam?

Yes, in my opinion, it is a scam – whilst you do get some training on affiliate marketing in return for your money sadly it’s very poor quality & it won’t help you make the kind of money they promise you will.

It’s clear to me that this system has been designed purely to make the creators rich at your expense & that they’re just filling you with a bunch of lies to get you to hand over your cash.

Once you hand over your cash I can almost guarantee that you will be disappointed with the product that you receive in return because they’ve sold you into it on a complete pack of lies.

The other problem here is that once you have bought the product (which I don’t recommend you do) the creator will have your contact details & he or she will begin pitching you into various other scams to try & take even more money off you in the long run now that they know you are interested in making money.

So overall as you can probably guess this system will be getting a huge thumbs down from me & I certainly won’t be recommending it because I can see that ultimately it’s not really set out to help you.