Mingle Cash is a fairly new website & it promises to provide an easy way for people to begin generating a passive income online with the potential for them to earn as much as $24,000 per day whilst only having to give up a few minutes of their time. 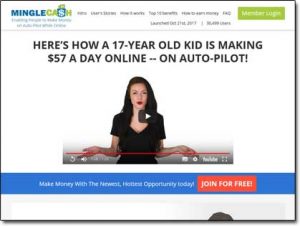 But can you really earn as much as $24,000 per day by working only a few minutes? It sure sounds too good to be true, and even the promise of $57 per day still sounds a lot in return for only a few minutes work…

Is it actually legit or is Mingle Cash a scam that’ll just turn out to be a waste of time?

Thankfully you’ve landed in exactly the right place to find out because I’ve taken a closer look into how it all works & in this review, I’m going to be uncovering everything you need to know – including whether or not you can actually make any money with it.

What Is Mingle Cash?

Mingle Cash is basically just a rewards website, similar to a typical paid surveys site which is something that you might be quite familiar with… However Mingle Cash claims to also contain a “revolutionary” 10-level referral system which is why the creator, Andrew Gitt believes you’ll be able to earn so much money.

Typically with a normal paid survey site, you’ll only be able to earn a few extra dollars each month & in order to do that you’ll have to spend a lot of time behind your PC filling in frustrating surveys… That’s why I usually don’t recommend them.

And to be honest, Mingle Cash is pretty much the same… From actually filling in the surveys or watching the adverts you will only be able to earn a very small amount of money – but the idea is that if you refer others, you’ll be able to earn a percentage of their earnings too & scale it up into a huge overall income.

However whilst that might sound great in theory, in reality, it doesn’t quite work that way… In fact whilst there is the potential for you to earn some money with Mingle Cash, I wouldn’t get your hopes up too high about doing so…

As you’ll soon see when I show you how it all works you’ll likely struggle to earn $57 per month, let alone $57 per day… And you certainly won’t be able to earn anywhere near the promised $24,000 per day.

How Does Mingle Cash Work?

Joining Mingle Cash is free, just like it is with any other legitimate rewards site – and in order to begin money, you’ll need to begin playing some of the games that are found inside of the members’ area.

Before each game starts (and throughout the gameplay) adverts will appear on your screen which you’ll be forced to watch. It’s these adverts that enable you to earn money as the advertisers pay the creators of Mingle Cash & then a small chunk of it is passed down to you.

And when I say small chunk I really do mean small chunk – for each advertisement you view you’ll only be paid a few cents, if that.

So basically in terms of just playing games, it will take you a LONG time to earn anything substantial, and that’s the reason the site has a super low withdrawal limit of just $2 because it will take quite a while to hit that amount.

There’s no doubt that when you sign up & start playing the games you’ll be disappointed at the amount you earn in return for the amount of time you put in… That’s why you’re then encouraged to participate in the 10-level referral program to earn more.

It’s through the referral program that you’re promised you’ll be able to earn the big money.

But will you actually be able to earn good money just by getting 5 other people to join the program like you’re told? The short answer is no, but you’ll see why when I explain the flaws below…

Andrew Gitt, the founder of Mingle Cash claims that his “unique” 10-level referral system works on a snowball effect. He states that if you bring in just 5 people, they’ll bring in 5, then they’ll bring in 5 & eventually you’ll have an army of people watching ads through the site & earning you money.

He even states (as shown below) that by just introducing 5 new members to the site you could potentially generate a whopping passive income of $24,000 per day…

But in reality, things won’t work out quite like that – I’ve seen many other programs push the same thing & in practice, it just totally doesn’t work. Yes, you might be able to get 5 people – but for you to make the money promised it is reliant on every single person also getting 5. If even a mere 1 of them doesn’t bother recruiting anybody then the whole thing will fail to work.

To put things into perspective, in order to earn a mere $31 per day you would have to have recruited over 18,000 people below you – and ALL of these people would have to be actively playing games through the Mingle Cash site.

Do you think that’s achievable? I certainly don’t!

Currently, the site only has 30,499 users in total & it’s been online since October the 21st 2017 so I think that speaks volumes about how overly hyped it all is. This also means that the website owner himself Andrew Gitt is only earning around $100 per day (if everybody is actively viewing ads)… So there’s really not much hope for you as a member.

Basically the whole thing sounds good on paper but in practice, it’s not that great… Which brings me onto…

Is Mingle Cash a Scam?

Well, I wouldn’t go as far as to say Mingle Cash is a scam – after all, there is the potential to actually make money with it, it’s just that you’ll be highly unlikely to make anything substantial from it like you’re promised.

Instead, if you sign up to Mingle Cash you’ll likely be spending a lot of time viewing ads & recruiting people & making very little in return. As far as I’m concerned there are much better ways to make money online & for that reason, I won’t be recommending it.

One of the best ways I’ve personally come across for making money online is affiliate marketing, and if you’ve like to learn more about that then you should check out Commission Academy. In short, it basically consists of you promoting products online & getting paid commissions in return for doing so. It’s the exact same way I personally generate my own income online.

But in my opinion, when it comes to Mingle Cash the whole thing is just way too overhyped & the claims made are totally unrealistic. If the website was promoted as a way to earn a few extra dollars each month then okay, maybe I’d have recommended it to you… But as it is, promising upwards of $57 per day with little to no effort there’s just no way I can recommend it because I know it’s very unlikely to do that.

So anyway hopefully this review has given you a good insight into how it all works & hopefully you can appreciate why I’ve come to the decision I have about it. If you do happen to have any further questions or comments about it though then don’t hesitate to leave them below & I’ll get back to you as soon as possible.