Money Genie is the name of a newly launched website which calls itself the “#1 social media affiliate network” & promises to provide influencers with a way to earn lots of easy money from social media. 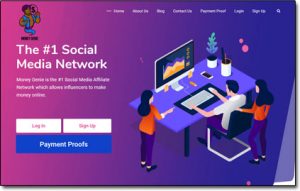 They also even claim that they’ll pay you a whopping $35 just for signing up… But is Money Genie actually legit & does it really pay? Or is it just another scam to avoid?

Well, I’m really glad that you decided to do your research & came here to this Money Genie review before you signed up because I can immediately tell you right from the off that the whole thing is nowhere near as great as it claims.

In fact, as you’ll soon see in this review, the whole thing is just a big fat con.

What Exactly Is Money Genie?

As I briefly touched on above, Money Genie calls itself a “social media affiliate network” and it basically leads you towards believing that you can just sign up, share links & get paid.

And in general, there is a legitimate method of making money known as affiliate marketing which involves sharing links & promoting products or services in return for cash (which is actually the same way I personally make most of my own money online).

But what’s striking about Money Genie is the fact that they claim to provide a way to make LOTS of money really easily.

You see with typical affiliate marketing you promote products or services & get paid when people make purchases, but with Money Genie, they claim that you can just promote their website & earn whenever someone creates a free account.

And they claim to pay a whopping $5 for every person that creates a free account via your link… So according to them if you were to get 1,000 people to create a free account, you’d earn $5,000 – which is a heck of a lot of money.

But aside from the bold income claims, there’s also something else that just doesn’t add up… And that’s where the money is supposed to be coming from…

Because if everybody is just creating free accounts & then getting other people to create free accounts then how on earth is Money Genie earning enough money to pay all of their members these commissions?

How are they earning any money at all?

Well, the truth is they’re not – at least not in the way they claim… And none of the members who join or promote Money Genie will ever get paid either because the whole thing is simply nothing but a scam.

The reason I can say that so confidently is because I’ve actually already exposed this scam several times before right here on this blog. Previously I’ve seen it called various other names such as OG Bucks, Clout Bonus & PaidLeaf.

The people behind it simply keep on changing its name in an attempt to escape the negative reviews which expose the truth about it so that they can continue tricking more people into signing up to it.

How Does Money Genie Work?

So as I’ve already explained, the “concept” is that you sign up, share links & get paid… But that’s not really how the Money Genie website works. The truth is that it’s actually nothing but a dirty data-harvesting scam.

This means that not only does Money Genie not pay, but it’s also basically set out to steal your data – and then trick you into referring others so that the people behind it can steal their data too.

And once they’ve got your data they’ll likely attempt to break into your online accounts or sell it onto shady marketing companies for profit if they’re unsuccessful.

You see they’re basically preying on the fact that most people use the same username, password & email combination for almost every single website they visit.

So when you sign up to Money Genie they’re basically hoping that you do so using the same details that you happen to use elsewhere (such as over at Facebook, Instagram or PayPal etc).

They’ll then try to login to those sites using your details in an attempt to compromise your accounts.

And as I mentioned, this also means that their promise of money is completely fake too. They’re basically just using the promise of money to encourage you to promote their scam & do the dirty work for them.

Each person you refer (in the hope of earning money) will just be another victim, so it’s needless to say that you certainly shouldn’t promote the Money Genie scam to anybody, and if you haven’t done so already, you shouldn’t sign up either.

But I’ve Already Signed Up & Got Earnings?

I’m sorry to be the one to break it to you but unfortunately, those earnings inside of your Money Genie account will never actually get paid to you, and that’s why they’ve set such a ridiculously high withdrawal limit.

The people behind Money Genie have gone to extreme lengths to trick people into promoting their scam & one of the things they’ve done is set it up in a way so that it appears like you’re actually earning when you’re not.

So as people click on your links or join via them, your account balance will increase accordingly in an effort to make you think that it’s actually legit.

The problem though is that it’s not really money, it’s just fake numbers & when you finally “earn” enough to be able to request a withdrawal you’ll find that they either ignore it or claim that you had “fraudulent clicks” on your links & refuse it.

They’ve just set the withdrawal limit really high to try to force you to refer as many people into their scam as you can before you’re able to find out that it’s not actually legit.

What About The Payment Proofs?

You guessed it, those are fake too… In fact, nearly every single thing that you’re told via the Money Genie website is a complete lie. Take the 2 Money Genie testimonials below for example, if you check the accounts of these 2 celebrities, neither of them have ever promoted Money Genie:

And surprise surprise all of their so-called “payment proofs” on their payment proofs page have all of the usernames blurred out so that you can’t actually verify them (because they’re not real).

But here, take a look at this… They also claim to be the “#1 social media network in the world” and to have paid out over 50 million dollars in commissions: 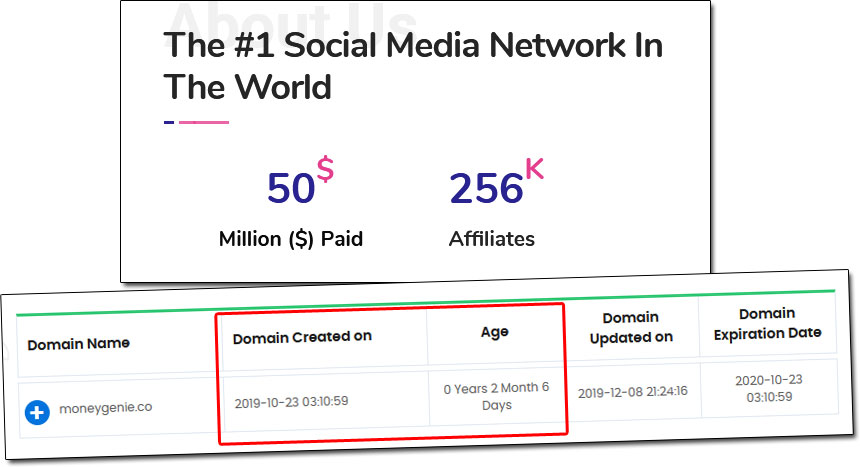 However, as you can see from the image above, according to a reputable “domain age checker” service their website was only launched a little over 2 months ago, so that’s a blatant lie too…

My Verdict – Is Money Genie a Scam?

There’s absolutely no doubt about it, Money Genie is definitely a scam & a very dangerous one at that as it is set out to attempt to part you with your sensitive data & potentially compromise your accounts.

Not only that, but Money Genie also doesn’t pay its members either… The whole thing has just been built upon complete lies & the promise of money is just there to encourage you to unknowingly lure other people into it.

It, therefore, comes without saying that I certainly don’t recommend Money Genie. You should stay away from it & if you have already joined prior to reading this review (and did so using the same details you use elsewhere) then I would advise you to change your details ASAP.

So as an example if you signed up using the same information that you use to login to Facebook, then you should head to Facebook & change your details there as soon as you can to avoid them compromising your accounts.

But also I’ll point out that it’s not all bad news because like I mentioned at the start of this review there is actually a legitimate way to earn from promoting links online & it’s done through something called affiliate marketing.

Affiliate marketing is basically where you promote products or services online & get paid commissions in return if anybody who clicks to them via your links happens to end up making a purchase.

It’s a great way to make money & it’s actually the same way that I personally make most of my own money online.

So whilst Money Genie itself may not be legit, the good news is that if you want to then you can still make money through affiliate marketing & you can get started with it for free over at Commission Academy if it’s something you’re interested in.

Or alternatively, you can check out these other cool ways to earn money online too.

But whatever you decide to do I just sincerely hope that my honest review of Money Genie here has given you a good insight into how it really works & I hope it’s helped you to avoid falling victim to it.

If you still happen to have any further questions or comments about it then, of course, don’t hesitate to leave them below. 🙂