The MTTB System (alternatively known as My Top Tier Business) has been put together by an Australian guy named Matt Lloyd & it claims that it will enable you to leverage the exact same “secret” that the super-wealthy use to amass their huge fortunes. 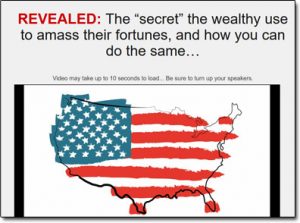 But is it actually legit or is MTTB a scam system that’ll ultimately just see you spending rather than earning?

Thankfully you’ve landed in exactly the right place to find out because I’ve taken a closer look into the whole thing & in this review, I’ll be uncovering everything you need to know including how it all works & whether or not you can really make any money with it.

As I briefly touched on above the MTTB system has been put together by an Australian guy named Matt Lloyd & it’s essentially a 21-step training program that promises to help you generate massive wealth online.

As a member of the system you’re told that you’ll get access to some sort of “done-for-you” business model which will see you starting to earn huge commissions online with little to no effort as shown below:

Matt Lloyd the creator claims that all the work has been done for you and that you’ll even get your own dedicated phone sales team who’ll for you & close sales to earn you commissions.

In just a moment when I show you how it all works, you’ll be glad you came to this review before buying into the MTTB system because I can confidently say this program is not what it seems…

How Does The MTTB System Work?

In reality, the MTTB system or My Top Tier Business program whatever you want to call it isn’t really a system or program at all… It’s just a sales page that “tricks” you into buying Matt Lloyd’s main biz-opp named MOBE aka My Own Business Education.

Basically MOBE is a program he created several years ago & it claims to help people make lot’s of money online, but the real way people make money with it is by simply selling it onto other people.

So essentially you buy into MOBE, the training shows you ways to promote it, then in order to make commissions with it you’re required to go out there and get other people to sign up & invest into it just like you did.

And you can only earn commissions on the products you personally own, so if you do join MOBE with our without the MTTB system then one thing you can expect is to be pressured into spending a lot of money.

Take note – there’s no guarantee of a return either.

Here’s a quick overview at some of the costs involved:

There are direct investments – monthly investments & annual investments. That’s why most people end up failing with the program because they simply run out of money before they manage to get the ball rolling.

Well, that & the fact that there’s so many misleading sales page like the MTTB system out there. I mean yes you can actually make money with MOBE, but it’s nowhere near as all these hyped-up sales pages make out & it will certainly take a LOT longer to get the ball rolling if you’re new (potentially even years).

They all promise you’ll make lot’s of easy money, but take a look at this:

That’s a screenshot of the average earnings generated by MOBE members & you can probably see straight away that the reality isn’t quite so great as 55% of active members make less than $100 per month.

Only a mere 2% of all members make the kind of income you’re promised through the My Top Tier Business sales page so clearly it can’t be as easy as they make it out to be otherwise there wouldn’t be so many people failing.

Okay yes, as I mentioned earlier in this review it is possible to make money with MOBE, and they do provide some training that will help you make money online – but it’s clear what’s really going on.

They introduce you to the system & promise it will provide you with an easy to way to make money, luring you in with a seemingly small entry fee. Then they put you through the 21 steps training…

However what you’ll realize as you progress through the 21 steps training program is that the whole thing has been put together simply to squeeze as much cash out of you as possible, as each new step requires higher & higher investment.

Then when you’ve invested that money there’s no guarantee that you’ll get anything back – instead, that’s when you’ll find out that the way you actually make money with the program is simply by promoting it onto other people & getting them to invest just like you did.

If you can’t get others to invest, you won’t make a penny.

Oh and remember the phone sales team? Well, it sure sounds good, but there’s some trickery here too… You see when you first start out in the system you’re promised to get a 1-on-1 coach – but after investing all the cash you’ll find out that your coach wasn’t a coach at all… That’s the salesperson!

All they were really there to do was push you into upgrading because Matt Lloyd is paying them commissions when they get you to whip out your credit card. The whole thing is a money squeeze!

And that’s exactly the way another program named Digital Altitude worked which recently got shut down by the FTC (because they could see straight through it) – so I wouldn’t like to think I was investing $50k with a company that could potentially also get closed down at any moment in time.

Is MTTB a Scam?

Well by definition it’s not a scam since they do actually provide you with some training & they do give you the opportunity to potentially make money, but the whole thing is pretty darn misleading…

I mean there is simply no way you are going to make money as quickly & as easily as the MTTB system sales page makes out you will, and therefore, in my opinion, it’s just a “trick” to part you with your cash.

You see yes, the internet does certainly give you added leverage when it comes to making money, but it’s not magical and NO system or program is ever going to generate you so much money with such ease.

The truth is if you really want to make money online then you must be prepared to put in some work to make it happen… The good news though is that if you are prepared to put in the work then there are legitimate programs like Commission Academy through which will help you get started the right way.

Ultimately if you buy into the MTTB system (even for just the initial $47) then, in my opinion, I feel you will only find yourself disappointed at what you actually receive, so for that reason I won’t be recommending it.

But hopefully, my review here has given you a good insight into how it all really works, and hopefully, it’s helped you save some cash. If you do happen to have any further questions or comments then don’t hesitate to leave them below & I’ll get back to you as soon as I can.