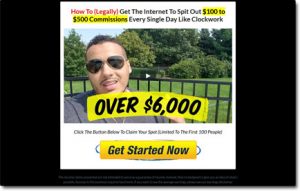 You’re told that it’s totally free to join, that pretty much everything has been done for you & that you can quit easily earn $10k+ per month with it.

But is it actually legit? Or is My Income Club a scam that you should just avoid?

Well, I’m really glad that you came here to this review of My Income Club before you signed up to it because I can tell you immediately right from the off that it’s not what it seems and it’s certainly not really free.

What Exactly Is My Income Club?

My Income Club is the name of a brand new money-making system & it essentially leads you towards believing that everything has been “done-for-you” so that you can simply sign up & make money without having to do anything.

It even claims to be free – and you’re given the impression that you quite easily earn as much as $10k to $30k per month with it as highlighted by the claim presented on their website shown in the screenshot below:

Alfredo Delgado is the name of the man that’s behind the system but that’s not the greatest news in the world because Alfredo is a guy that was formerly involved in the Digital Altitude scam that launched a couple of years ago.

What’s more, is that the sales video promoting his newly launched My Income Club system looks an awful lot like the one he was previously using to promote his Digital Altitude venture… So are we just looking at another high-ticket scam?

Well, not quite… But in the same breath we’re not really looking at anything promising either because as you’ll soon see in the next section when I explain in finer detail how it all works, the My Income Club system isn’t all it’s made out to be…

How Does My Income Club Work?

You’ve probably already noticed that the website promoting the My Income Club system doesn’t really give a great deal away as to how any of it actually works… Instead, you’re just bombarded with “testimonials” from people showing off how much they’re allegedly making with it.

Then in order to find out more about how any of it actually works you’re simply pushed into handing over your details & signing up. The good news is that it’s free to initially sign up…

The bad news though is that if you do happen to sign up (which I absolutely don’t recommend) then you’ll quickly realize the whole thing actually costs a LOT of money.

And that’s because the whole thing is just geared around spending & recruiting… That’s how people are making their money with this thing.

There isn’t really any “done-for-you” system or anything like that at all. It’s basically just a case of signing up to My Income Club, then joining all the paid things Alfredo instructs you to join & finally recruiting others to do the same.

If you can’t recruit people, you won’t make money – it’s as simple as that.

Plus it’s also quite clear that there’s no real product or service involved here… The whole thing is quite clearly primarily geared around making money by recruiting others which would technically make it an illegal pyramid scheme.

Here’s The Run-Down of Exactly How It Works…

Unfortunately, though that’s not the case & instead here’s the REAL run-down of how it actually works:

So the idea is that you’ll sign up for those programs & when you do, the person that referred you to My Income Club will earn commissions at your expense… Then you get to connect your links & refer others in the same way… Only this time you would earn at their expense.

However there are some big problems here…

The first problem is that you’ll be spending nearly $180 on recurring bills every single month before you even get the opportunity to make a single penny with this program… And that’s totally unnecessary because you don’t need to spend anything to earn as an affiliate.

If you take advantage of the training at Commission Academy you’ll learn how to promote affiliate offers for free.

The second problem is that My Econ is a multi-level-marketing company and many people are extremely reluctant to get involved with MLM’s due to their extremely high failure rates (and rightly so).

The FTC actually put out a publication which highlighted that less than 1% of participants in MLM’s ever actually made a profit (as shown below):

But then on top of that, there’s an even bigger problem, which is the fact that the My Income Club requires you to sign up to a program named Easy 1 Up which is a known scheme that I’ve already exposed on this blog.

The problem with the Easy 1 Up program is that it only allows you to earn commissions on the levels that you’ve personally purchased in at… So if you only buy the $25 level & make a $2,000 sale, that sale will just get passed up & go to the next qualified person above you instead.

And of course, there’s absolutely no guarantee you’ll make any of it back.

In fact, most people don’t, which brings me onto…

Can You Make Money With My Income Club?

The truth is that yes, it’s technically possible to make money with the My Income Club program… It’s just very unlikely that you will unless you’re already an experienced marketer due to the lack of training provided inside.

Plus like I mentioned in the previous section of this review even though you can “technically” make money with it, the whole thing is very shady due to the programs it’s associated with & the whole focus on recruiting thing.

You’re literally just signing up to learn how to make money & then making money by promoting it to others by promising that it’ll teach them how to make money… There’s no real product or service at all.

My Verdict – Is My Income Club a Scam?

Well, I wouldn’t go as far as to say it’s a scam as such since there is actually the possibility you could earn something with it, however, what I will say is that it’s much more likely that you’ll just spend money on it rather than actually make it.

For that reason, I won’t be recommending it & instead if you truly want to make good money online I would suggest you just stick with a proven & legitimate platform like Commission Academy. It’s there that you’ll be able to find proper success (and it doesn’t revolve around recruiting!).

Whatever you decide to do though I just hope that my review of My Income Club here has given you a good insight into how it really works & what you can expect from it if you were to actually join. If you still happen to have any further questions or comments about it then of course don’t hesitate to leave them below. 🙂