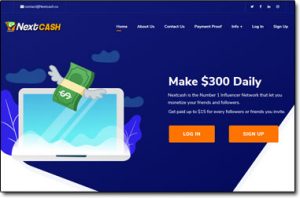 It calls itself the world’s number 1 influencer network & claims that you earn as much as $300 per day just by simply sharing links on social media.

But if it’s legit, then why isn’t everybody doing it?

Well, the quick answer is because unfortunately, it’s NOT legit. NextCash.co is actually nothing but a scam & in this review I’ll not only be uncovering the hidden dangers but I’ll also be uncovering the better (legit) alternatives.

That’s a pretty bold claim though for a website which only launched 11 days ago.

Essentially you’re led to believe that all you need to do is simply sign up, then get others to do the same. NextCash claim that they’ll pay you $15 for every person that you get to create a free account.

They even claim that you’ll be able to easily earn as much as $300 per day.

How can they afford to pay out a whopping commission of $15 for every person that you refer?

Well, this is what they claim in their FAQ:

But I can tell you right now that’s a load of nonsense.

Well for a start, NextCash don’t even display any advertisements anywhere on their website… And even if they did, as an experienced online marketer I can tell you there’s no way they’d be able to earn enough revenue from advertising alone to pay such high commissions.

Each of those websites made the exact same claims as NextCash.co does but it failed to deliver on them. None of the members that joined got paid & instead they just put themselves at risk of getting scammed.

What’s worse is that the NextCash scam is actually pretty darn dangerous.

How Does NextCash Work?

So as mentioned in the previous section of this review, the idea is that in theory, you’ll be able to sign up, refer friends & then earn money as a result… But that’s not really how it works.

Instead, the whole thing is actually just something known as a viral data-harvesting scam.

All they want is your data & the data of the people that you refer because their goal isn’t to help you earn money, it’s to attempt to break into your online accounts (such as Facebook accounts, PayPal accounts, etc).

They’re basically working on the idea that most people sign up to every single website with the same username, email & password… And it’s true – according to this article by security company Sophos, most people do.

So they’re simply hoping that you also sign up their NextCash.co website with those same details too, because if you do then there’s a high chance that they’ll be able to access your accounts.

How Can You Protect Yourself?

Obviously the ideal situation is to not sign up at all. If you haven’t yet signed up to NextCash then you’ll be just fine (but definitely keep reading if you want to see the other legitimate alternatives).

If however you’ve already signed up & you did so using the same details that you happen to use elsewhere then you might have a problem & you should definitely change those details ASAP.

As an example, if you signed up to NextCash using the same details that you use to sign in to Facebook then you should head to Facebook & change them as soon as you can to prevent the people behind NextCash.co gaining access.

And if you signed up but did so using different details, you might be wondering how you can just delete your details from their system – unfortunately, though that might not be the best idea.

You see a legitimate company would indeed honour your request to have your data deleted, but NextCash isn’t legit & so any request will likely just bring more attention to your data meaning it could be more likely to be targeted.

The best thing to do would be to just stay away from the site.

I’d also recommend sharing this NextCash review with anybody who might have also clicked on your referral link too if you happened to share it before discovering that it was actually just a scam.

How Can I Withdraw My Money Earned?

The problem though is that the earnings aren’t real.

NextCash has just built their system in a way to make it seem like you’re earning so that you’ll keep referring more & more people, but it’s nothing other than faked numbers – it doesn’t actually have any real money value.

And that’s why they’ve set their withdrawal limit so ridiculously high. They want you to have to refer as many people as you can before you’re able to submit a withdrawal request because they know as soon as you do, you’ll find out it’s a scam. 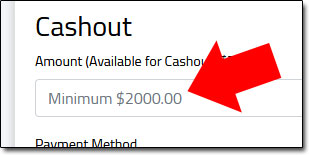 In short, you can’t withdraw from NextCash. None of the people that join will ever get paid. It’s all a scam.

Is NextCash.co a Scam? My Final Verdict

Yes, NextCash is indeed a scam website. It’s nothing but a trick to get you to enter your details & then refer others to do the same so that the creators can attempt to break into your online accounts.

As I mentioned further up in this review I have already exposed this scam under various other names, such as Tap2Cash, Influencer Cash & Use2Earn.

If you click on any of those links then you’ll be taken to my reviews of those scams and you’ll see that all of the sites are almost identical, proving that the whole thing is nothing but a con.

Plus there’s also the fact that like I mentioned, the NextCash.co site claims to be the “#1 influencer network in the world” yet it has only actually been active a mere 11 days. Nothing they say is true.

So with all that in mind it’s safe to say that I am going to advise you steer clear of NextCash because if you sign up to it you will just be putting yourself at risk of getting scammed.

Instead, I would recommend you check out one of the 4 legitimate alternatives found on my top picks page here.

And I’ll point out here at the bottom of this review that my personal favourite method is something called affiliate marketing. It’s actually also the same method I personally use to earn most of my own money online.

You can check out more information about it on my top picks page or alternatively you can jump right in & get started with it at Commission Academy (my highest recommended training resource).

Whatever you decide to do though I just sincerely hope that my honest review of NextCash.co here has given you a good insight into how it really works & I hope it has helped you to avoid it.

4 thoughts on “NextCash.co Scam Exposed – But Here Are Some Legit Alternatives You Can Use Instead”