Use2Earn calls itself the “#1 influencer network in the world” & it claims to provide people with an easy way to earn lots of money from social media by simply sharing links & referring friends. 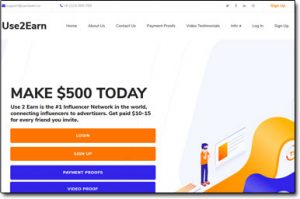 As a visitor to Use2Earn you’re told that all you need to do is sign up, copy your unique referral link, share it on social media & that you’ll get paid a whopping $10 to $15 for every friend that signs up via your link.

They even claim that you can earn as much as $500 per day right from the very same day you get started.

But is it actually real? Or is Use2Earn a scam influencer network site that’ll just see you somehow losing money rather than earning it?

Well put it this way, you’ll be really glad that you came here to this review of Use2Earn before you signed up because I can immediately tell you that it’s not what it seems & that it’s actually pretty darn dangerous.

As I briefly touched on above, Use2Earn calls itself an “influencer network” & it basically leads you towards believing that it connects people who have influence on social media with advertisers who are looking to pay them money for promoting their products.

And Use2Earn claim to have totally simplified the process, because according to them all you need to do is create a free account, grab a link, share it & then invite others to join just like you did.

You’re told that you’ll be paid a whopping amount of $10 to $15 for every person that you get to create a free Use2Earn account via your link – and they even claim that you’ll be able to easily make as much as $500+ per day.

How is Use2Earn actually earning money?

Well like I mentioned above, Use2Earn claim that the money is coming from advertisers – but that’s simply not true. For a start there are no advertisements even displayed on the Use2Earn website, and nor is there any mention of having to view them.

And secondly, I can tell you as an experienced online marketer that even if there were adverts displayed on the Use2Earn site, there’s no way they’d be profitable enough to enable Use2Earn to pay such large referral commissions.

The only way you’d be able to earn high commissions like $10 to $15 (or more) would be by promoting products or services as an affiliate… Not by referring people to a “free” website.

You see the truth is, in short Use2Earn is actually nothing but a scam & I can say that so confidently because I’ve actually already exposed this exact scam several times in the past.

The people that are behind it just keep on changing its name in an attempt to escape the reviews that expose the truth about it (like mine on this blog) so that they can continue tricking more people into signing up to it.

But what if you’ve already signed up? And how exactly does the scam actually work? What do they get out of it?

Basically Use2Earn isn’t a real website, and it’s certainly not the “#1 influencer network” as they claim it is… In actual fact, the whole thing is just what’s known as a viral data-harvesting scam.

So what does this mean?

They’re basically working on the premise that most people sign up to all of the websites that they visit online using the exact same credentials (same username, email, password etc).

And they’re hoping that you’ll also sign up to Use2Earn using these same details as their goal is to essentially compromise your online accounts – such as PayPal accounts, Facebook accounts, etc…

So upon signing up to Use2Earn (which I don’t recommend doing if you haven’t already), the scammers behind it will then begin looking for any accounts that they can find associated with your details.

And unfortunately, even if they’re not able to find any accounts or not able to break into them you’re still not quite in the clear as they’ll then likely still sell your data on shady third-party marketing companies who’ll bombard you with spam.

If you’ve already signed up to Use2Earn & you did so using the same details that you happen to use to sign in to other websites then you should definitely change those details as soon as possible.

The best advice would be to simply exist the Use2Earn website & refrain from revisiting it.

And if you happen to have already shared your Use2Earn referral link with others then I would urge you to delete the posts in which you shared the link & instead share this review so that the people you shared it with can discover the truth & protect their accounts.

One of the reasons many people have been getting caught up in the Use2Earn scam is because the people behind it have gone to some quite extreme lengths to make it appear to be legit.

And of the things they’ve done is they’ve set it up in a way that makes you believe that you’re actually earning money because as you refer people your account balance inside of Use2Earn does actually increase accordingly.

The problem though is that the numbers are just fake, it’s not real money – and that’s why the withdrawal limit is set so ridiculously high.

They’ve set the withdrawal limit really high so that you’re forced to refer as many people as possible before you’re able to discover that it’s nothing but a scam. You see, once you finally try to make a withdrawal, that’s when you discover you never actually get paid.

So not only is it a scam, but it’s also one that could massively waste your time too.

And just in case you’re still not 100% convinced…

First of all, there’s the fact that Use2Earn calls itself the “#1 influencer network” & claims to have been around since March 2015 as shown below:

But a quick search on the domain’s age (use2earn.co) reveals that’s a complete lie, as shown below:

And then there’s the fact that they’ve added a phone number to their website to try to make it seem legitimate however a quick Google search revealed the phone number actually belongs to a company named FINJS.

And if that alone isn’t enough to prove it’s a scam, even the Use2Earn payment proof is fake too. They call it “payment proofs” however none of the so-called proof images actually show any of the users’ social media handles which means you can’t verify them.

Unverifiable proof isn’t proof… Which brings me onto…

My Verdict – Is Use2Earn a Scam?

Use2Earn is definitely a scam & it’s actually a very dangerous one at that because the people behind it are ultimately set out to break into your online accounts such as PayPal accounts, social media accounts, etc…

The promise of money is just a trick to get you to sign up & promote the site to others so that they can get it to “go viral” and collect as much data as possible… Nobody who joins Use2Earn will ever get paid.

And like I mentioned at the start of this review I’ve actually already seen this scam several times before under different names like Money Genie, OG Bucks & Clout Bonus etc. They all call themselves the “#1 influencer network” but none of them are, they’re all scams…

However thankfully there is some good news – you see whilst Use2Earn itself may not be legit, there are actually still legitimate ways that you can earn good money online (even if you’re inexperienced).

One of the ways that I highly recommend is something called affiliate marketing & the reason I recommend it is because it’s actually the exact same way I personally make most of my own money online.

Affiliate marketing basically involves you promoting products or services online (such as products from Amazon) in return for commissions – and the amount you can earn with it is totally uncapped.

The harder you work, the more you can earn – and some people even make crazy amounts of money like 6-figures per month with it. It’s hard to comprehend for sure, but it just highlights the true potential with it.

And if you’re interested in learning more about it or getting started with it I’d highly recommend you check out Commission Academy.

Or if you don’t feel it’s for you then you can always check out these alternative ways to make money too.

But whatever you decide to do I just sincerely hope that my honest review of Use2Earn here has given you a good insight into how it really works & most importantly I hope it helped you to avoid getting caught out by it.