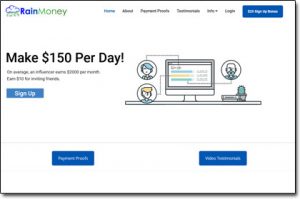 You’re led to believe that you can basically sign up, share a link & earn a whopping $10 for every friend that creates a free account with Rain Money after clicking via your link.

And they even claim that you can easily make as much as $150 per day.

But $150 is a lot of money, especially for something that seems so easy… So what’s the deal?

Is Rain Money legit, or is it just a scam website that’s set to somehow part you with your hard-earned cash instead?

Well, I’m glad that you decided to do your due diligence & came here to this Rain Money review before you went ahead & signed up because I can immediately tell you that it’s not what it seems & that it’s actually pretty dangerous.

What Exactly Is Rain Money?

Rain Money essentially portrays itself as being an “influencer network”, which in short basically means that it claims to provide people with a way to easily earn lots of money by sharing links on social media.

So the idea (as you’re led to believe) is that you’ll be able to sign up to Rain Money, grab a link to share, share it – and then earn a whopping $10 for every person that you get to create a free Rain Money account just like you did.

But there’s a big question you should be asking, which is where is the money coming from? How can Rain Money afford to pay people so much money for referrals if everybody is just creating accounts for free?

How are they earning their money?

Well deep in their FAQ I was able to find a bit of text that claimed the following:

However I can immediately tell you that is false, and there are 2 reasons I can say that with such confidence… The first reason is because the Rain Money website displays absolutely no advertisements whatsoever.

And the second reason is because the Rain Money website is actually just a re-hashed version of a scam I’ve already exposed several times before. The people behind it have just launched it under a new name in an attempt to continue tricking people into signing up.

Previously I’ve seen this exact same scam named Click4Kash, Money Genie & OG Bucks… And I can tell you that NONE of the members will ever find themselves getting paid. Instead, they’ll just be wasting their time & potentially putting themselves victim to being scammed.

So the next thing you’re probably wondering is how does the scam work? Well, keep on reading to find out because that’s exactly what I’m going to explain next…

How Does Rain Money Work?

So, in short, the whole promise of money is fake, and instead of being an “influencer network” like it claims to be, Rain Money is actually nothing but a data-harvesting scam which is set out to secretly steal people’s details.

Basically they’re working on the concept that most people use the same username/password/email combinations to create accounts at each website they visit, and they’re hoping that when you sign up to their Rain Money website you’ll use these same details again.

Then from there, they’ll simply try to find other accounts associated with your details (such as PayPal, Facebook & even bank accounts) & they’ll potentially attempt to break into them & use them for illicit purposes.

Or if they’re unsuccessful at breaking into them they’ll likely just sell your data onto shady third-party marketing companies who’ll then just bombard you with unwanted spam & potentially further scams.

Essentially it’s bad news – and nobody who joins Rain Money will ever get paid.

They’re basically just using the promise of money for referrals as a trick to get people to sign up & promote their scam… So by sharing the Rain Money referral links, you’d essentially just be luring others into the scam.

Admittedly though they’ve gone to some lengths to make it seem convincing as they’ve set their system up in a way which makes it seem like you’re actually earning.

You see when you share a link & get somebody to join, your balance increases accordingly to make you think that it’s actually working… However it’s not real money, it’s just faked numbers & that’s why the withdrawal limit is set so ridiculously high.

They’ve set the withdrawal limit so high so that you’re forced to recruit a whole bunch of people before you’re able to discover that the Rain Money site doesn’t really pay… Unfortunately by then though it’s too late, you’ve already wasted your time & gave away your details.

Another tactic the people behind Rain Money have used to trick people into signing is to publish video testimonials on their website – however, none of the testimonials posted are actually real.

The video testimonials (as shown below) actually just consist of paid actors hired from the website Fiverr: 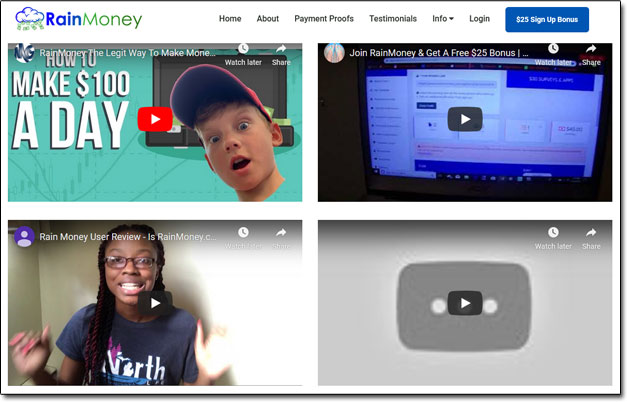 The people claiming to have made money with Rain Money aren’t actual members, they’re just people that have been paid to read a script.

And the lies don’t end there either, in fact, the entire Rain Money is FULL of lies… For example, also on their testimonials page, they claim that they have paid out $35 million to date, that they have 150,000 members & that they are officially the “#1 influencer network”…

However, a quick check on the age of the domain reveals that the website was only registered a mere 5 months ago as shown below: 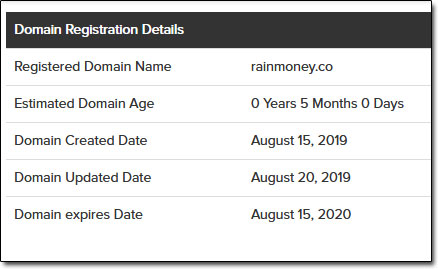 There is simply NO way that those statistics shown on the Rain Money website are real. It’s just another trick to try & make people believe that it might actually be legit to entice them to join… Don’t fall for it.

Oh, and then there’s the so-called “payment proofs” page on which they’ve displayed a bunch of people who have supposedly shared details of the payments that they’ve received from Rain Money.

The problem with this “proof” though is that all of the account usernames have been blurred out which means none of the images are actually verifiable, which means that it’s not actually “proof“.

And the reason they’ve blurred the account usernames is that the screenshots are clearly not real, they’ve just been photoshopped & they know if they left the usernames in you’d be able to easily find that out.

Unfortunately, if you’ve already signed up there’s not a great deal you can do with regards to deleting your data, however, what you should definitely do is change your passwords ASAP if you happen to sign up to Rain Money using the same one you use elsewhere.

And of course, if you have shared the link to Rain Money anywhere already then you should not only go back & delete those links, but you should also share a link to this Rain Money review to make people aware that it’s actually a scam & not legit.

Which also brings me onto…

My Verdict – Is Rain Money a Scam?

Yes, there’s absolutely no doubt about it, the evidence is overwhelming… Rain Money (found at rainmoney.co) is definitely a scam & it’s actually a very dangerous scam as it could result in your online accounts being compromised.

Even if the people behind Rain Money aren’t able to compromise your accounts it’ll still likely result in your data being sold onto shady third-party marketing companies so either way, it’s definitely bad news.

As this review points out, almost everything you’re told via the Rain Money website is a lie & none of the members will ever find themselves getting paid. Plus this scam has already surfaced before under several different names such as Money Genie & Click4Kash.

So whatever you do, don’t sign up to Rain Money – and if you already have then I urge you to follow my advice in the previous section above.

Instead, if you truly want to earn money online I would advise you stick with one of the legitimate methods from my top picks page here which have all been tried, tested & proven to work.

Or alternatively, you could check out the same way that I personally make my own money online which is through a method called affiliate marketing (and in my opinion, it’s the best way to earn money online).

Affiliate marketing basically involves you promoting third-party products or services online & getting paid commissions in return for doing so… Plus the amount you can earn with it is totally uncapped – the harder you work, the more you stand to earn.

So if you’d like to learn more about affiliate marketing or get started with it you can check out Wealthy Affiliate right here (which is a training program that’ll teach you everything you need to know).

But whatever you decide to do I just sincerely hope that my review of Rain Money here has given you a good insight into how the whole thing really works & I hope it’s helped you to dodge falling victim to it.

If you still happen to have any further questions or comments about it though then, of course, don’t hesitate to leave them below & I’ll get back to you as soon as I can. 🙂

2 thoughts on “Rain Money – Scam or Legit? My Review Uncovers Why You Won’t Earn $150 Per Day”