Click4Kash calls itself the “#1 influencer network in the world” and it promises to provide people with a really easy way to make lots of money online even if they’ve never made so much as a single penny online in the past. 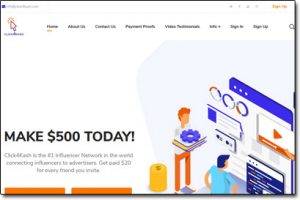 Visitors to Click4Kash are led to believe that all they need to do is sign up (for free), grab a link, share it – and that they’ll then earn a whopping $20 for every single person that also happens to create a free account via their link.

But is it actually legit? Or is Click4Kash a scam that’ll just see you somehow losing money instead of actually making it?

Well put it this way, I’m really glad you decided to do your research before joining & came to this Click4Kash review first because I can immediately tell you that it’s NOT what it seems and that it’s actually pretty darn dangerous.

So as I briefly touched on above, Click4Kash calls itself an “influencer network” and it basically promises to provide people with an easy way to make lots of money by simply sharing links online (through sites such as Facebook & YouTube etc).

Visitors to Click4Kash are led to believe that all they need to do to earn money through the site is simply sign up (for free) and then get others to do the same.

They’re told that they’ll be paid a whopping $20 for every person they get to create a free account & that they’ll easily be able to earn as much as $500 per day from the comfort of their very own home.

But there’s a couple of problems…

Firstly – if what they’re saying is true, then why isn’t everybody doing this? Why are people still working at jobs they dislike if they could just share links via Click4Kash & earn $500+ per day from their home?

And secondly – where the heck is the money coming from?

If everybody is just creating free accounts then how on earth can Click4Kash afford to pay people commissions of $20 for every new member they invite? How are Click4Kash making their money?

Click4Kash was designed to serve as the middle man to connect influencers with top corporations.

But I can tell you right now with 100% certainty that’s simply not true. The reason I can say that is because Click4Kash has absolutely nothing to do with corporations… As a member you sign up, then promote Click4Kash – there’s no “corporation” involvement whatsoever.

And the other reason I can say it with so much confidence is because Click4Kash is actually nothing but a scam and a pretty darn dangerous one at that.

I can tell you that so confidently because it’s a scam I’ve already seen (and exposed) several times before. The people behind it simply keep on changing its name & appearance in an attempt to escape the negative reviews so that they can continue tricking people into signing up to it.

Some of its previous names include LiteBucks, Cash4Clickz, Tap 2 Earn & most recently Money Genie.

So the people behind Click4Kash want you to believe that you’ll be able to sign up, share links & earn money… But that’s not how it works – and none of the Click4Kash members will ever get paid.

The reason for that is because Click4Kash is actually just a data-harvesting scam, and they’re using the promise of money to lure people in. Unfortunately, though the promise is just a fake one, and the money “earned” isn’t real.

You see the people behind Click4Kash are preying on the fact that most people use the same credentials to sign up to every single they visit online. Not many people use different emails, usernames & passwords for separate sites.

Most people just use the same email address & password… And Click4Kash has essentially just been built so that the people behind it can get this data from you & attempt to compromise your online accounts.

So basically once you’ve signed up to Click4Kash (which I don’t recommend doing), the people behind it will then attempt to find any other accounts associated with your details – such a Facebook accounts, PayPal accounts & potentially even bank accounts.

And even if they’re unsuccessful you’re still not entirely in the clear because they will still then likely sell your data onto shady third party marketing companies who’ll bombard you with spam & further scams.

But the worst thing is that on top of just stealing data, they’re also tricking members into promoting their scam for them.

Click4Kash claim that if you share their site with others & get other people to join, they’ll pay you $20… But that’s a lie. They’re just lying to you to trick you into promoting it so that you’ll lure other people into the scam.

It’s all just a trick though & they’re basically just using you to then get other people’s details as well.

The people behind Click4Kash have gone to extreme lengths to try & make their scam seem legitimate & whilst it’s easy for me (an experienced online marketer to see that it’s a scam) it’s not so easy for somebody that’s new to making money online.

And surprise surprise this is the exact type of person they’re targeting.

The good news though is that whilst Click4Kash may not be legit, there are actually some legitimate ways that you can make money online.

One of the things Click4Kash have done to try to make it seem legit is set it up in such a way so that your “account balance” actually increases accordingly with each new member you refer, leading you to believe that it’s actually working & that you’re actually making money.

You sign up, you refer someone, your account balance reads $20… It seems legit… And for every person you refer, it keeps adding $20. Naturally, therefore, people get enticed to keep going.

The problem though is that members will never actually be able to withdraw that money because technically it’s not real money, they’ve just faked the figures & that’s why they’ve set the withdrawal limit so ridiculously high.

They want you to refer as many people as you can before you’re able to discover that it’s actually all just a scam.

But What If You’ve Already Signed Up?

If you’ve already signed up to Click4Kash & you did so using details that you use elsewhere then you should definitely go and change your details as soon as you can to prevent the people behind Click4Kash composing your accounts.

So as an example if you signed up to Click4Kash using the same details that you use to sign in to Facebook then you should head to Facebook & change your login details there.

So the best advice would be to just close the Click4Kash website & stay away from it to save them getting anything else from you.

Here’s The PROOF It’s Not Legit…

Well firstly there’s the fact that Click4Kash calls itself the “#1 influencer network in the world” and states that it has been around for over 10 years as shown below: 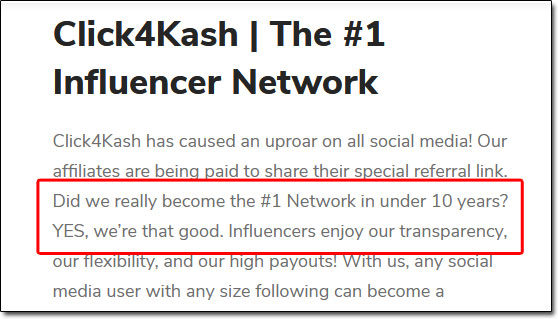 But this simply isn’t true because a quick search on the domain name revealed that the website has actually only been active for little over a month as shown below:

Then there’s the so-called “payment proofs” page which contains a bunch of screenshots from users who are allegedly making money, yet it fails to display any of the members’ social media usernames that you can actually verify them.

It doesn’t matter what they call it, unverifiable proof is NOT proof… And alongside that, they’ve also included “video testimonials” which simply feature paid actors that have been hired from the website Fiverr.

The lies don’t stop there though because Click4Kash have also listed an address on their website which reads as “Laan van Langerhuize 1, Amstelveen, 1186 DS Netherlands” as shown below: 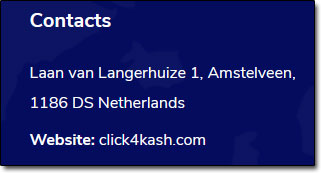 Guess what? Surprise surprise it’s not their address… It’s actually the address of a huge corporation named KPMG.

My Verdict – Is Click4Kash a Scam?

Click4Kash is definitely a scam & as you can likely now see after reading my review it’s actually a pretty darn dangerous one because if you to sign up to it then the people behind it will attempt to compromise your other online accounts.

The whole thing has literally been built upon lies & deceit & nobody that joins Click4Kash will ever get paid – so if you haven’t done so already then take my advice & steer clear of it. Don’t join.

There is some good news though, which is that even though Click4Kash itself may not be legit there are still many other legitimate ways that you can earn money online.

One of the best ways, in my opinion, is something called affiliate marketing & it basically involves you promoting products or services online in return for commissions… And it’s actually the same way I personally make most of my own money online.

So for example as an affiliate you might promote some products from Amazon, then if somebody clicked on your link & made a purchase you’d get paid… Plus the amount you can earn with it is totally uncapped.

Anyway, if that’s something that interests you then you can learn more about it (for free) over at Wealthy Affiliate.

Or as I say you can also check out the alternatives here.

But whatever you decide to do I just sincerely hope that my honest review of Click4Kash here has helped you to avoid it & I hope it’s given you a good insight into how the whole thing really works.