Online Empire is the name of a new website that has just recently launched which claims to provide people with access to a “revolutionary” new way to easily earn lots of money online by investing in digital advertising. 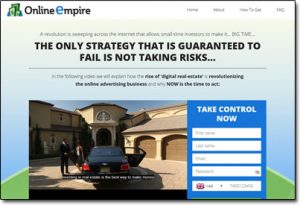 Visitors to Online Empire are led to believe that they can simply sign up, fund their account, invest in ads & then earn a steady stream of income from all of the people that click on the ads they’ve invested in.

But is this method really legit? Could you really earn money from what they called “crowd-sourced advertising”?

Or is Online Empire a scam that’ll just end up seeing you losing money rather than actually making it?

Well, you’ll be glad that you came to this Online Empire review before you signed up to it because what I can tell you right from the off is that the whole thing is certainly NOT what it seems.

What Is Online Empire?

Online Empire is a newly launched website that claims to provide its visitors with a revolutionary new way to earn online. Apparently, according to them you can simply sign up, deposit funds & invest in online advertising to see an almost guaranteed return.

They call it “crowd-sourced advertising” and they say that through their opportunity you’ll be investing in advertising run by some of the biggest brands in the world such as Sony, Adidas & Microsoft.

They claim that the big companies are looking for people to invest in their advertising to help them reduce costs & they claim that by investing you will own some “digital real estate” which will see you earning money each time the ads are clicked on.

According to them (as shown below) many of their members are allegedly earning as much as 5-figures per month:

But could it really be true? Could you really earn so much money so easily with such little risk? And if it is true then why isn’t everybody doing this?

Why are people still working at jobs they dislike if they could simply invest in online advertising through Online Empire & earn more money than they currently do in their job without actually having to do any work?

Well, the answer, in short, is because it’s NOT legit. The whole thing is actually just what’s known as an ad flipping scam & rather than being set out to help you make money the truth is that it’s just set out to make its creators wealthy at your expense instead.

You don’t just have to take my word for that though, instead keep on reading & I’ll explain how it all really works below so that you can see first-hand for yourself what’s actually going on & why you won’t make any money…

How Does Online Empire Work?

So basically Online Empire lead you towards believing that you’ll be participating in something which they term as ad flipping or “crowd-sourced advertising” but in reality, that’s simply not true.

In fact, the whole thing is actually just a trick… As an online marketer myself who earns a full-time living online from promoting things as an affiliate I can tell you that there’s no such thing as flipping ads.

They’ve basically come up with a totally fake concept in an attempt to simply lure you into depositing funds. The problem though is that the concept doesn’t really exist & the people behind Online Empire are just set out to steal your cash.

Simple – because I’ve actually exposed this exact same scam several times before when I’ve seen it launched under different names such as the Ad Formula, the Ad Code & Crowd Profits.

The people behind it just keep on changing the name of it in an attempt to escape the negative reviews that surface so that they can continue tricking people into joining it and parting them with their cash.

Sadly though those that join are not really investing in online advertisements like they’re told – they’re essentially just playing a video game in which they’ve been made to believe they’re profiting just so that they’ll keep on depositing more & more money.

The bad news though is that just like the ad flipping method itself, the profits aren’t real either… And people will only be left to discover the hard way it’s all been a scam when they try to make a withdrawal & realize it never gets processed.

I mean don’t get me wrong, to a newcomer the whole thing might certainly seem convincing but that’s because they’ve made it seem that way. They want to make it seem like it might actually be legit to trick you into signing up… But they also want to make it just confusing enough to prevent you from seeing the scam at hand.

You likely know the good old saying that “if it sounds too good to be true, then it probably is“… Well, that definitely applies here when it comes to the Online Empire program because the whole thing is certainly WAY too good to be true.

For example, the creators of Online Empire claim that most members make 5-figures per month, and then further down the page in their FAQ they claim that you only need to spend around 15 minutes per day reviewing various advertising opportunities (as shown below):

So, in other words, they’re claiming that you can make a 5-figure per month income by doing just a mere 15 minutes of “work” per day… And they even claim that you can get started with only $200 too.

But obviously, that’s just ridiculous – and if it were true then everybody would be doing it, but they’re not & the simple reason is because it’s not true, it’s a scam.

You see yes the internet does provide you with many legitimate opportunities to make money however what you must understand is that whilst the internet is great it is not magical & it is not just going to see you earning lots of money for nothing.

Sure you can make good money online, you can even make big money online – but in order to do so, you must be prepared to put in the relevant work to make it happen. The more you want to make, the harder it’s going to be… That’s just life.

Nothing comes easy – and if something promises it will, then it’s likely just trying to scam you.

Is Online Empire a Scam?

In my opinion yes, the Online Empire website is definitely a scam website because the so-called ad flipping opportunity doesn’t even exist – it’s all just a trick to get you to deposit funds so that they can earn at your expense.

What’s worse though is the fact that if you do deposit funds you’ll be further tricked because they’ve actually set it up so that it makes you think you’re really profiting in order to trick you into depositing more money.

They basically just want to get as much money out of you as possible & I know that because like I mentioned earlier in this review I’ve actually already seen this exact same thing launched under several different names such as Crowd Profits & the Ad Formula.

It, therefore, comes without saying that I won’t be recommending Online Empire & instead if you truly want to make good money online I will suggest that you stick with one of these legitimate & proven methods.

I’ll also point out that one of the best methods in my opinion for making money is something called affiliate marketing which is actually the same way I personally make a full-time income online.

But whatever you decide to do I just sincerely hope that my review of Online Empire has given you a good insight into how this whole ad flipping thing works & hopefully it has helped you to save your cash. If you still happen to have any further questions or comments though then don’t hesitate to leave them below. 🙂

2 thoughts on “Online Empire Review – Scam or Legit Way To Earn By Investing In Digital Advertising?”