The Crowd Profits site claims to provide the biggest online money-making opportunity that’s ever been launched & promises that you’ll be able to turn a relatively small $200 investment into a passively weekly income of over $4,000. 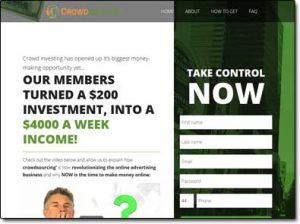 But obviously that’s a pretty bold claim & no doubt as a result you’re pretty sceptical about the whole thing… So what’s the deal?

Is it really legit, or is Crowd Profits a scam that’ll just end up costing you money rather than helping you make it?

Thankfully you’ve landed in exactly the right place to find out as I’ve taken a closer look into it to see exactly what’s going on & in this honest review I’ll be sharing the real truth about how it all works, including whether or not you can really make any money with it as they claim.

What Is Crowd Profits?

Okay so basically Crowd Profits claims to be some sort of revolutionary website that’ll see you being able to easily build a large income online by leveraging something called crowdsourcing in the online advertising business.

You’re led to believe that you’ll be able to sign up & invest in advertisements put out by the biggest brands in online advertising, which will then allegedly see you earning a profit from every person that clicks on those ads you invest in.

The Crowd Profits state that advertisers are moving this new method of crowdsourcing their advertisements because it supposedly enables them to reduce their ad-costs significantly… But I can tell you that’s total BS.

Simple, because I’ve been in the online marketing game for a LONG time and not only is there no such thing as crowdsourcing online advertising, but I’ve also exposed 2 other similar scams prior to coming across this one named Banner Bit & Daily Banner Profits.

I don’t expect you to just take my word for that though – after all, I appreciate you may have come across the Crowd Profits site & gotten really excited about the potential opportunity to make money. Maybe you are not wanting to give up on that so easy, so instead, I’ll show you exactly how it all works below so that you can see for yourself what’s really going on.

How Does Crowd Profits Work?

The truth is the Crowd Profits system doesn’t actually work at all, it’s just an investment scam that’s been designed to trick you into parting with your cash through a fake concept known as ad flipping.

The whole thing leads you into believing that you’ll be investing in online advertisements from big brands such as Nike, Samsung, Microsoft etc which seems pretty reassuring… But it’s a total lie.

As a newbie to making money online, that whole concept might seem kinda legit… After all, advertisers spend money & make money back… So why couldn’t you get in on a share of their profits?

Well, I can tell you as an online marketer – something I have been doing for several years, that there is NO way you could crowdfund ads in such a way as the Crowd Profits system claims you can.

The whole thing is built on utter BS and all it is is a ploy to trick newcomers into handing over their hard-earned cash.

Once they hand over their cash (a minimum of $250) they will indeed be presented with a whole bunch of advertising in the member’s area that they can seemingly invest in, but none of it is real.

The creators of the whole thing have just added a whole load of random ads, but they aren’t actually being displayed anywhere online (hence why you’re not told anything about the websites they’re supposedly appearing on).

But Here’s The Worst Part…

The worst part about these ad flipping scams is that the creators of them are very, very cunning. Not only do they trick you into handing over your cash with this very clear ploy they’ve come up with… But they also trick you into thinking you’re profiting, just like binary options scammers do.

So if you happened to sign up, deposit money & invest in ads through their site (which I obviously totally don’t recommend doing) you’d begin to see your account balance increasing making it seem like you were making money.

However, this is totally FAKE. The profits generated and the account balance shown is not real… It’s just a simulation – none of it is actually connected to the real world & instead they’ve just pocketed the cash you’ve invested.

The reason they fake your profits though is that then a few days or weeks later they’ll follow up with you & this time try to encourage you to invest even more with the promise of generating even bigger profits.

In my review of Banner Bit, many people said they had been scammed out of thousands in this exact way.

So whatever you do, don’t fall for it – and certainly don’t sign up to the Crowd Profits system because it is total utter BS.

Is Crowd Profits a Scam?

I can tell you with 100% that the Crowd Profits platform is indeed a scam – the whole ad flipping concept that it’s based around is totally flawed & there’s simply no way you’ll make money with it like they claim that you will.

The whole thing is nothing more than an (admittedly clever) ploy that’s been designed to part you with your hard-earned cash so that the creators, or should I say con artists, behind it can earn some money at your expense.

Therefore as you can probably imagine there is no way I am going to be recommending it to you because it’ll just leave you disappointed & out of pocket… But the good news is that there IS a way you can actually make money from online advertising.

The way you can make money from it legitimately is called affiliate marketing, which is basically where you get paid commissions for promoting third party products or services online. It’s a VERY good way to make money & if it interests you then you should definitely check out Wealthy Affiliate which is where you can get started with it.

But either way, whatever you decide to do I just hope that my review here has helped you out & given you a good insight into how the whole thing really works (and why you shouldn’t invest in it). If you do have any further questions or comments though then don’t hesitate at all to leave them below.