Have you come across the brand new AD Code system that promises to provide you with $5,000 or more in guaranteed profits starting from the very same day that you sign up? 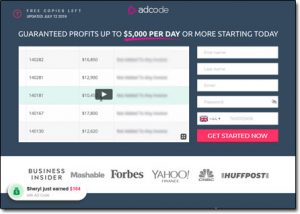 Are you now wondering if it’s actually legit & if it’s founder Rob Goldman is really telling the truth?

Well the good news is that you can rest assured that you’ve landed in exactly the right place because in this honest AD Code review I’m going to be uncovering the real truth about Rob Goldman’s system – as well as uncovering why you WON’T want to join.

What Is The AD Code?

The AD Code is the name of a brand new website that’s supposedly been founded by a man named Rob Goldman & it promises to provide its visitors with a way to make guaranteed profits of $5,000 per day right from the very same day that they get started…

But obviously that’s a pretty bold claim, especially since $5,000 per day adds up to over $1.8 million per year…

If you really be “guaranteed” to make $1.8 million per year so easily then why isn’t everybody doing it?

Why are people still working at jobs that they dislike if this thing is real – and why haven’t we heard about it on the news already?

The answer is because as you likely already suspect, the AD Code system is not what it seems… And the reality is that rather being set out to help you to make money like it claims, it’s just set out to make its creator money instead.

Therefore if you sign up to the AD Code system you will likely just end up losing money, not making it – but you’ll see why when I explain in more detail how it all actually works below…

How Does The AD Code Work?

The truth is that the AD Code system is nothing new – it’s actually just re-hashed version of a scam that I’ve already exposed several times on this blog before. Adflippers & the Quantum Ad Code are just 2 of the names it’s previously launched under…

And whilst the name changes, sadly the scam stays exactly the same.

So how does the scam actually work I hear you ask?

Well basically the guys behind the AD Code claim that the whole thing revolves around something called ad flipping, which the founder (Rob Goldman) describes as being the process of buying & selling advertising online for profits.

He claims that you can simply use his system to buy online advertising & then generate profits from the revenue that the adverts are generating for the companies that are running them.

So as an example, let’s say a company were paying me to put an advert on my website here – and they were paying me a fixed amount every time it got clicked on… Rob Goldman claims that by investing the ads you’ll be taking a percentage from each of the money paid out on those clicks.

Almost sounds legitimate, doesn’t it? And that’s Rob Goldman’s aim… He has put a real spin on things to confuse newcomers & make them think that “hang on a minute, this might actually work”…

The problem though is that as an experienced online marketer I can tell you with 100% certainty that it does not work. There is no way that you can invest in advertising in such a way that Rob Goldman claims, and nor is there a way that it would be beneficial for anybody in the advertising game to “share profits” like he claims either.

Sadly though it seems that many people have been getting tricked by the AD Code website, and then they are led through to another website owned by the same people named Click2Sell, which is where their money gets taken.

Click2Sell is supposedly the “marketplace” where you will be able to get access to all of these profitable online advertising spaces – but in reality it’s just a further addition to the ploy to trick you into spending money.

You’re not really buying advertising (even though the website leads you to believe you are). You’re just putting money into the pockets of the people behind the whole thing – and you’ll never see your cash again.

Like I said at the start of this AD Code review, if it were really possible to make money so easily then everybody would be doing it. Nobody would be left working a job & the world would be in crisis.

Yes the internet does indeed provide many legitimate ways to make good money however what you must understand is that it is not magical & there isn’t (and never will be) any method that sees you earning lots of money with ease.

Anything that promises fast, easy money is likely a get-rich-quick scam & should be avoided.

Is Rob Goldman a Real Person?

Rob Goldman according to the AD Code website is the “CEO & founder”, so naturally I decided to investigate a little into him too… Is he a real person? Can he be traced & can you get your money back from him if you’ve already been scammed?

The first thing I did was a run a Google search for the name & here’s what I found:

According to several articles that I found, Rob Goldman is the name of Facebook’s Vice President of Advertising… But surely it couldn’t be him behind the AD Code scam, could it?

Thankfully NO – that was not the case – and I was able to determine that because the creators of the AD Code had placed a photo of “Rob” on their website which didn’t match with that of the Facebook Advertising Vice President (shown below):

So who is this Rob Goldman? I ran a reverse image search on the image using Google however no results came up… So it would appear to me that the name & photo shown on the AD Code website are just fictitious.

After all if Rob Goldman (pictured) was really the creator of a system that could legitimately generate $5,000 for people then I’m pretty darn sure that he would be well known online & easy to find.

Okay so clearly from reading my AD Code review so far you will know that the whole thing is absolutely not what it seems & does not work as promised… But is there any possibility that you could make any money from it?

What about even just $50 per day? Is it possible to make that money with the AD Code system?

The simple answer is no – it’s not… And the reason for that is because the entire “ad flipping” thing is made up. It doesn’t work as promised & the people behind the Ad Code system are just set out to part you with your cash.

Any money you deposit will be gone for good, that’s a fact… Which brings me onto…

Is The AD Code a Scam?

Yes, I can say with 100% certainty that the AD Code system is a scam & the reason I have branded it as a scam is because it is purely set out to take money from you. The whole thing has been built up on lies & there is NO way that you will make money from it.

Even the system’s so-called creator Rob Goldman is made up as well.

Plus there’s also the fact that the system has already been launched under several different names including Adflippers & the Quantum Ad Code. The people behind it are just changing the name in an attempt to escape the negative reviews that surface so that they can continue parting people with their hard earned cash.

The name may change but the scam stays the same.

So there’s absolutely no way you should sign up to the AD Code system, instead you should give it a wide berth & avoid it because it’s nothing but bad news. It’ll rob you with your cash & leave you with nothing.

Plus whilst on the topic of news it’s also worth pointing out that the AD Code system hasn’t been featured on news sites such as Business Insider & Huffington Post like it claims it has. That’s all lies too.

So yeah – definitely avoid it… But what if you’re still interested in making money? What can you do?

Well one of my all-time top recommendations is something called affiliate marketing which is basically where you connect people with the products that they’re looking for online & get paid commissions in return.

The good news is that you can get started for free with this over at Wealthy Affiliate & there’s no limit on the amount you can earn. I myself have been making a full-time income with it for many years.

Or if that’s not your thing then you can always check out my other top picks for making money online on this page here. 🙂