Opinion City is a website that promises to connect you with high paying survey companies – they claim that all the companies on their website have been fully vetted by their team & that they truly are the best of the best. 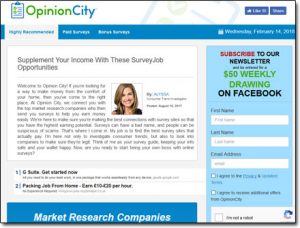 At a glance, it all looks fair & well but in order to get access to their “highly recommended offers” you need to hand over some details – so what’s the deal, is this site actually legit or is Opinion City a scam?

After taking a closer look at the site I found some big issues & in this review, I’ll be uncovering everything you need to know, including what the problems were I found & why you likely won’t want to sign up.

What Is Opinion City?

Initially, Opinion City attempts to pass it off as a paid survey website, but it’s not – it’s just a website that refers you to various other paid survey companies. They claim though that they only list “the best of the best”…

You’re led to believe that all of the survey companies listed on the Opinion City have been vetted by their “Consumer Trend Investigator” named Alyssa, who supposedly checks that they’re legit to keep you safe.

On top of that, the surveys they list are apparently not just any old surveys – they’re allegedly the sites that will provide you with the highest earning potential so that you will get paid the most money in return for your time.

It all sounds good, right? Well, sadly the truth isn’t so great…

Everything you’re told on the website of Opinion City is false – Alyssa isn’t even a real person. A quick Google search on her “photo” will show you that the image has just been taken from a stock photo website.

Whilst you’re led to believe that Opinion City have your interests at heart they don’t, they only have their own at heart. All they’re interested in is getting you to sign up as many different companies as possible because they’re getting paid to refer you.

Initially, this isn’t too much of a problem because the surveys listed on their homepage at least are legit, however as I mentioned above after taking a closer look I noticed a very big problem with this site…

The Problem With Opinion City

Once you’ve finished signing up to the handful of survey companies found on their homepage you’ll likely want to then get access to their “highly recommended offers”, only in order to do this you’ll need to hand over your details. Specifically, they want your name & email address…

After doing this (which I don’t recommend you do unless you want to be bombarded with spam) you’ll be taken to your “dashboard”. 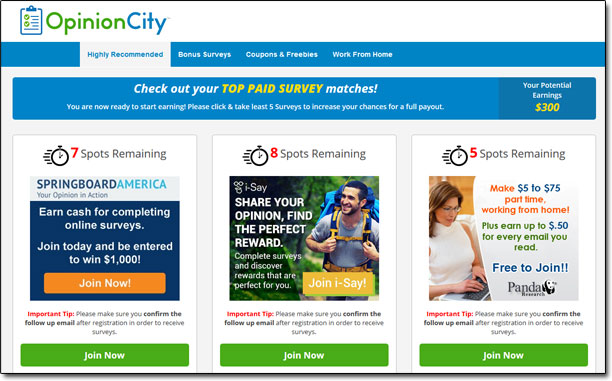 This is where the whole thing starts looking an awful lot like a scam.

You see typically paid survey companies are renowned for paying very little – even the highest paying companies generally on average don’t pay much more than a $1 or so per survey.

Anyway, Opinion City promise potential earnings of $300 if you sign up to 5 of their recommended survey sites. This is a very bold (and unrealistic) income claim which makes me very suspicious.

They also employ fake scarcity tactics on this page too which is another big red flag. You’re told that each survey company only has a limited amount of spots left available but this is simply not true. These companies have been around for many years & their registration has always been open to new members without any limit.

In fact, after reviewing hundreds of paid survey companies the only site I’ve ever come across to date that closes off its registration now & then is a company named Valued Opinions.

Things Go From Bad To Worse…

The good news is that as I write this review the surveys listed on the main page of their members’ dashboard area are indeed legit, so ultimately if you sign up to them it is likely not the end of the world…

However, you absolutely cannot trust this site (and I wouldn’t recommend signing up to anything through them) because if you browse to their “Work From Home” tab then literally everything listed is a scam. 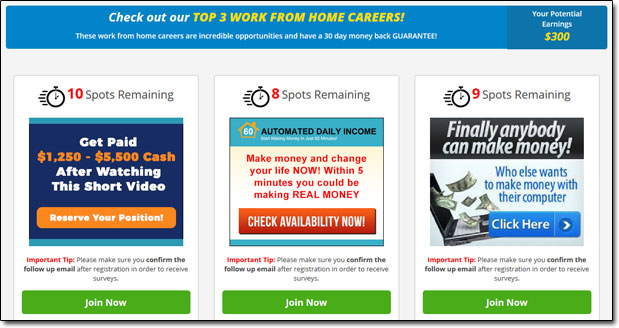 It seems that the creators of Opinion City really do just want to make as much money from you as possible & they are willing to refer you into anything to do just that.

The sites listed on their “Work From Home” page are scam programs I’ve previously exposed such as:

These programs make false promises then require you to pay money to sign up – after handing over your money you’ll be left to find out that they don’t work as promised & surprise surprise the creators won’t give you it back.

Is Opinion City a Scam?

Well the Opinion City website itself isn’t technically a scam but it certainly can’t be trusted because the creators behind it are clearly just set out to try & make as much cash from you as possible.

Don’t get me wrong, some of the survey sites listed on their website are indeed legit but there’s just no way you could trust them due to the way they’ve bundled them together with scams. If you want to get access to a bunch of paid survey sites without having to sign up or worry about getting scammed then check out the free list I’ve put together here.

So overall it’s safe to say I’ll be giving Opinion City a big thumbs down & there’s no way I’ll be recommending it to you. Take my advice & avoid this site otherwise, you could land yourself in some trouble.

Anyway, hopefully, this review provided you with the insight you were looking for into this program but if you do happen to have any further questions or comments don’t hesitate to leave them below.