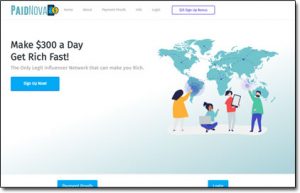 You’re led to believe that all you need to do is sign up for free, share links & invite others to join just like you did. For every person that joins via your link, you’re told that you’ll be paid a whopping $10 commission.

But is it actually legit? Does PaidNova really pay? Or is the whole thing just a scam that you should avoid?

Well, I’m glad that you came here before signing up to it because in this PaidNova review you’re going to learn about the hidden dangers which could actually see you losing money by joining as opposed to making it.

PaidNova calls itself an “influencer network” and it essentially promises to provide people with an easy way to make lots of money through social media – even if they don’t know the first thing about making money online.

The PaidNova website literally states that you can “earn $300 daily” and “get rich fast” as shown below:

But how do you do it?

Well according to them you just need to sign up for a free account, grab a referral link which is unique to you & then invite others to join PaidNova on social media using your referral link.

If they click on your link & create a free account just like you did, you’re told that you’ll be paid $10… And you’re also told that you can refer as many people per day as you please, earning $10 every time.

However, there’s a couple of huge red-flags here… For example, there’s the fact that the whole thing sounds WAY too good to be true. Then there’s the question about where the money’s coming from…

If everybody is creating free accounts on PaidNova then how an earth can PaidNova afford to pay out a whopping $10 per new member? They have to be getting money from somewhere, right?

Well, the truth is there is no money coming into PaidNova – and nor is there any money getting paid out either. I can actually tell you right from the off that PaidNova is a scam & that nobody who joins will ever get paid.

Instead, anybody who participates in it will just be involving themselves in a dangerous scam which could potentially see their online accounts becoming compromised (such as social media accounts, banking accounts, etc).

The reason I can say that so confidently is because I’ve already seen this same scam several times before. It’s previously been launched under the names of InfluencersEarn, NiceCash & LiteBucks.

The person behind it just keeps on changing the name of it in an attempt to escape the reviews that expose the truth so he (or she) can continue tricking people into signing up to it.

But what are the dangers if you do? Keep on reading because that’s exactly what I’m going to explain next as we take a closer look into how it all works…

Nobody who joins PaidNova will ever get paid & that’s why they’ve set ridiculously high withdrawal limits – so that you’ll have to refer a whole bunch of other people to the scam before you’re able to find out it doesn’t really pay.

So just what IS going on then?

Well, the truth is that it’s what’s known as a data-harvesting scam. This means that the people behind it are just trying to collect as much data from people as possible – such as emails, usernames, passwords etc.

They’ve created the whole “fake influencer network” thing so that you’ll then find yourself doing the dirty work of promoting the site to others on their behalf. It’s a cunning plan by the creators for sure.

However, it’s what they’re doing with the data that’s the biggest problem…

You see PaidNova & other fake influencer networks like it are basically preying on the fact that most people use the same credentials (username/email/password) for every website they visit.

So when you sign up to PaidNova the people behind it will then attempt to try to find any other online accounts associated with your details such as social media accounts, PayPal accounts & even bank accounts.

Here’s a comment a user left on this blog when they signed up to a previous version of this scam called Tap 2 Earn: 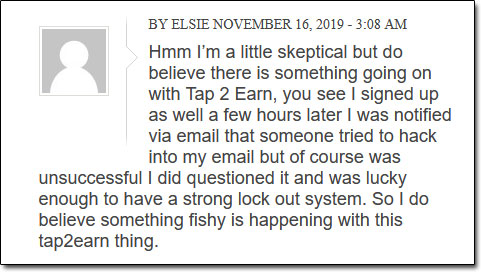 The person who left the comment reported that right after signing up to Tap 2 Earn (another fake influencer network) they received a notification telling them that somebody was trying to gain access to their email account.

Coincidence? I think not!

And if they’re unsuccessful at getting into your accounts then there’s still another problem which is that your data will simply be sold on to third party marketers (likely solo ad vendors) which means you’ll be bombarded with spam.

And most of the spam you receive will likely just be promotions for more scams… It’s not good.

If you already signed up to PaidNova prior to coming to this review & you did so using the same credentials that you use elsewhere then I would absolutely urge you to go and change them ASAP.

Of course, don’t change them at PaidNova – don’t even visit that website again – just change them at the other places you use them (such as Facebook, Twitter, PayPal, etc).

Unfortunately, there’s nothing you can really do in getting your data deleted from PaidNova because the people behind it are not legit which means they won’t honour any deletion requests.

As I mentioned above your best bet is just to stay off the PaidNova website, don’t even visit it again because it’s good for nothing.

My Verdict – Is PaidNova a Scam?

PaidNova is definitely a scam there’s no doubt about it & it’s a very dangerous one at that. Like I mentioned earlier in this review I’ve already seen the exact same thing before under different names like Tap 2 Earn & InfluencersEarn.

The people behind these fake influencer networks have absolutely no interest in helping you to make money – they only care about making themselves money & they’re doing that using you.

They’re promising that you’ll be making cash through their platform but in reality they’re just tricking you into doing their dirty work for them. By promoting PaidNova you’d essentially just be promoting their scam for them.

So it comes without saying that you shouldn’t join PaidNova & you certainly shouldn’t promote it. In fact, on that note, if you have indeed already promoted it then I would advise you share this review with the people you shared it with so that they can protect themselves too.

And if you would still like to make money online legitimately then I recommend you check out one of the proven methods from my top picks page here.

You could also check out my top recommendation which is something called affiliate marketing. It’s through affiliate marketing that you can really get paid for sharing links online & you can get started with it for free at Commission Academy.

But whatever you decide to do I just hope that my honest review of PaidNova here has given you a good insight into how the whole thing works & I hope it has helped you to avoid getting caught out by it.

If you have any questions or comments then don’t hesitate to leave them below. 🙂