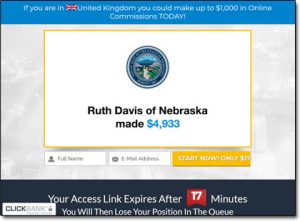 According to its own claims, the Passive Profit Pages software can create small, simple web pages for you & see you generating an automated income of $1,000+ per day right from the very same day that you get started.

But I think you’ll agree, that’s a pretty bold claim.

So what’s the truth about “Passive Profit Pages”? Is it really legit & can you actually make money with it or is it just a scam that’s set out to part you with your hard-earned cash?

Well, the good news is that you’ve landed in the right place to find out as I’ve personally taken a closer look into it & in this honest review I’ll be uncovering everything you need to know.

What Is Passive Profit Pages?

Passive Profit Pages is a newly launched website that essentially claims to provide you with a really easy way to begin making lots of money online, even if you’re completely new & have no prior experience.

You’re led to believe by the software’s promo video that you’ll be able to simply sign up, hit a button to create some web pages & then begin collecting a passive stream of affiliate commissions.

Plus, on top of that, the software even claims that you begin making money on the very same that you get started.

As you can see below, the software claims that if I was to get started today, I could make as much as $1,000:

But, of course, there’s a catch…

And that catch is that in order to get access to the so-called magical money-making method, you need to hand over $17 of your own hard-earned cash first… Which I think you’ll agree, is a little bit strange.

After all, if the system can make you $1,000’s per day on autopilot so easily, then why does the creator of it need to charge you to access it?

And if he really does want to charge you a fee then why doesn’t he just offer to take a percentage of the profits?

I mean that would make a lot more sense, right?

Well, as you’ve probably guessed, the reason is that the Passive Profit Pages software does not work as promised. In fact, the reality is that it’s actually nothing but a scam.

I’ll explain why & show you how it all really works in just a moment but first, let’s take a look into the person that’s supposedly behind it…

Who Is Behind Passive Profit Pages?

According to the Passive Profit Pages sales video, the creator of the software is named “Bill”.

Bill allegedly used to be the owner of a coffee shop but according to the Passive Profit Pages sales video he was forced to declare bankruptcy after Starbucks opened up in the same town.

Luckily, Bill met a man named Tony shortly after declaring bankruptcy & Tony had a “secret money-making system” that had enabled him to generate millions of dollars with affiliate marketing.

This meant that all of Bill’s problems were solved & then Bill decided to launch the system under the name of Passive Profit Pages to enable other people to begin making money exactly like him.

Well, it certainly makes for a nice fairytale at least… But that’s all it is… A fairytale.

The story isn’t real & neither is Bill.

It’s all just a fairytale that the real creator has made up in an attempt to lure you in & encourage you to hand over your cash. Bill is just a fake name that the true creator has chosen to hide behind.

So, who is really behind it?

Well, the reality is that we just don’t know. Whoever is really behind it has chosen to keep themselves completely anonymous… And the reason that they’ve chosen to do that is likely pretty obvious.

But in case you can’t yet see why they would want to remain anonymous, let me explain exactly how it works. Once you know how it works, you’ll soon see why the creator has chosen to hide.

How Does Passive Profit Pages Work?

In fact, affiliate marketing is actually one of the best ways that you can make money online.

But the problem lies with the method sold to you via Passive Profit Pages. In short, the method that they sell to you sounds good in theory but in practice, it simply doesn’t work.

You see, affiliate marketing (in case you don’t already know), involves promoting products or services online in return for commissions.

So if somebody clicks on a product via your referral link, you get paid a commission in return for any successful sales.

Well as you can see, the process is relatively straight forward… But whether you actually make money with affiliate marketing or not depends on 1 thing.

This is known as “targeted traffic”.

And without that targeted traffic, you won’t make a dime.

But that’s all you’ll get.

So as I say, it sounds good in theory, but in practice, it’s just a scam. The only person that’s actually making money from Passive Profit Pages is the person that’s behind it.

And that’s why the creator has chosen to hide behind the fake name of “Bill”.

The Passive Profit Pages website is literally full of red flags. Almost every single thing on the website screams “scam”, especially the fact that it simply sounds WAY too good to be true.

I mean, come on… If the Passive Profit Pages could really enable people to earn $1,000 per day automatically just by handing over a mere $17 then everybody would be doing it.

Heck, nobody would be left working a job… The world would be in crisis.

On top of that, there’s also the fact that the disclaimer states the following:

examples shown in this presentation do not represent an indication of future success or earnings. All results show in our presentation, website, or marketing literature are atypical results. Average results are unknown.

And then there’s also the fake scarcity timer that’s designed to make you rush into signing up as shown below:

The timer makes it seem as though you’ll lose your position & miss out if you do not quickly sign up but if you refresh the page then the timer simply resets & counting down again.

And the reason the creator wants you to rush into signing up is that he doesn’t want you to look for reviews before you join as he knows that if you do, you’ll find out that it’s a scam.

Is Passive Profit Pages a Scam?

Yes, it most certainly is. There are some Passive Profit Pages reviews that claim the system actually works but those reviews have been created by people who are affiliated with the software.

This means that if you sign up to it via their link, they get paid a commission… So in order to earn themselves money they’ve created fake reviews to trick you into signing up via their link.

Don’t be fooled by them.

The Passive Profit Pages software is complete junk & should be avoided.

Heck, if it really worked then I would be using it myself… But I’ve been in the affiliate marketing game for a number of years now & I know that the Passive Profit Pages method is just totally flawed.

The good news is that even though Passive Profit Pages doesn’t work as promised, you can still make good money from affiliate marketing… You just need the right training to learn how to do it.

In my free course, I outline exactly how affiliate marketing works & how you can begin making money with it (the right way) in the shortest time possible, even if you’re completely new.

You can check it out here.

Or if you’ve already signed up to the Passive Profit Pages scam & just want to find out how you can get your money back then keep on reading & I’ll explain how you can do exactly that.

How To Get a Refund From Passive Profit Pages

As you may have noticed, the people behind Passive Profit Pages do not provide any easy-to-access support. This means that it can feel like it will be impossible to get a refund…

But the good news is that it’s not.

You CAN get a refund from Passive Profit Pages & the way you can get that refund is by contacting the company that it’s being sold through directly.

You see, when you hand over your money to buy into Passive Profit Pages, you’re actually making the purchase via a digital products marketplace known as ClickBank… And ClickBank DO offer refunds.

In most cases, they give you up to 60 days to get your money back.

And to make things even easier for you I’ve put together a complete guide on getting your money back from ClickBank right here.

So if you’ve already bought into the Passive Profit Pages scam prior to landing at this review then my guide (here) will show you the exact steps you need to take to get your money back.