The Pattern Trader system has just recently launched & it promises that it can enable its members to generate as much as $2,200 per day all on complete autopilot without them having to lift a finger… 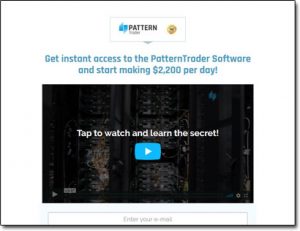 You’re led to believe that you basically just sign up, activate the system & make money… But is it really that simple, or will the Pattern Trader scam you & just end up taking money from you rather than actually helping you make it?

Thankfully you’ve landed in the right place to find out as I’ve taken a closer look into exactly how it all works & in this honest review I’ll be uncovering the truth, including of course whether or not you can really make any money at all with it.

What Is Pattern Trader?

And the website promoting it basically leads you towards believing that you’ll simply be able to sign up, make a small deposit, run the software & receive your very own passive income all thanks to the automated system.

Oh and not just any old passive income either, oh no, the Pattern Trader system claims it’ll be able to help you easily generate as much as $2,200 per day even if you’re totally brand new to trading.

Well admittedly the website makes it all look pretty legit, what with all the technical jargon & all… But I can tell you right from the off that the Pattern Trader system is actually nothing but a big fat scam.

Instead of helping you make money like it claims it will the Pattern Trader system will do absolutely nothing other than help you lose it. The reason I can say that so confidently is because I’ve seen this exact scam several times before.

It’s called a binary options scam & they regularly launch under different names in the hope of catching people out. Some recent examples include the 30K In 30 Days App, BitRobo & The Bitcoin Hack.

They all claim the same BS, that they’ve been built on some sort of “revolutionary” algorithm that can generate you automated profits… But as you can guess it’s total lies & they’re all just flat-out scams.

Obviously though I don’t just expect you to take my word for that – after all I appreciate that you might have been getting really excited thinking that the Pattern Trader system was going to work for you… So instead keep on reading & I’ll explain how all it all works so you can see what’s really going on. 🙂

How Does Pattern Trader Work?

Well the first thing I want to stress is that the Pattern Trader certainly doesn’t work as promised that’s for sure – and the reason I want to stress that again is just in case you happened to have skipped straight down to this part of the review.

So how does it really work?

This basically means that if you did happen to sign up to their “recommended” broker & make a deposit like they tell you to do, the creators of the Pattern Trader system would earn a commission at your expense (paid to them by the broker).

And this is exactly where the scam lies – because the truth is that the Pattern Trader is nothing but a ploy to get you to deposit via the broker that they’re affiliated with (which also happens to be a scam broker).

The whole thing is built upon lies & deceit & everything you’re told via the website is fake. They’re just doing their best to trick you into depositing & then when you do (which I absolutely don’t recommend) you’ll be left to find out the hard way that it doesn’t actually worked as promised.

By this point though it’ll sadly be too late to do anything about it because the Pattern Trader people have got their commissions & the broker (the scam broker) has got your money – which they won’t give you back.

Even if you have money left in your trading account with the broker they will either refuse your withdrawal request, ignore it altogether or give you some fake excuses as to why you can’t get your money back.

That’s why people are having to go through 3rd party chargeback companies (like MyChargeBack) to get their money back from these types of scams.

The Biggest Red-Flag That Proves It’s a Scam

The whole trading method these scams prey on is something called binary options trading – which to be honest is just bad news altogether… In fact binary trading is actually worse than gambling in my opinion.

The odds are just completely stacked against you & whilst it seems really easy to profit, the truth is that it’s actually next to impossible.

Anyway the reason that’s important is because the broker that you’re recommended to deposit with is a binary options broker – and binary brokers only make money from their customers when they lose.

So it’s in their interests for you to lose money, and if you make money… Well, they end up losing money.

Now ask yourself, why would a binary options broker be paying commissions to the creators of a system which can supposedly enable all of its members to generate guaranteed profits? Especially when such a system would put the binary broker out of business?

The simple answer is they wouldn’t! And that’s proof right there that the whole thing is a scam.

The binary brokers (or should I say binary scammers) know that it’s all fake just as well as the creators of the system do, they’re all in on it together & sadly they’re just set out to cash in at the expense of others.

Anyway that brings me nicely onto…

Is Pattern Trader a Scam?

I can tell you with 100% confidence that the Pattern Trader system is indeed a scam & it’s good for nothing other than helping you LOSE money. The whole thing is built on nothing but lies & deceit.

As I mentioned earlier in this review it’s just a ploy & it’s been purely set out to trick you into depositing with the scam broker so that the creators of the whole thing can earn themselves some commissions at your expense.

Once you actually do make the deposit (which I totally don’t recommend) you’ll just be left to find out the hard way that it doesn’t work as promised at all, and that rather than making profitable trades all it makes is losses.

So save your money & stay the heck away from the Pattern Trader scam because it’s just all round bad news. If you really want to make good money online just stick with a legitimate & proven program like Commission Academy (which is actually my all-time number 1 recommendation).

Or check out some of these other legitimate ways to make money online.

Either way whatever you decide to do I just hope that my review here has given you a better insight in this system & hopefully you can now see why it should be avoided. If you do have any further questions about it though then don’t hesitate to leave them below & as always I’ll get back to you as soon as I can.

4 thoughts on “The Pattern Trader SCAM System Is Beyond a Joke! My Review Exposes The Truth”