The Bitcoin Hack system claims that it can exploit a loophole which was allegedly let in the Bitcoin network by its creator & that as a result, it can generate you automated profits of around $1,421 per week. 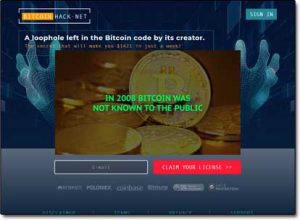 You’re led to believe that the exact system has already generated over $2.1 million for other visitors & that you too can enjoy a share of the profits for yourself by simply signing up “for free”…

But is it really legit, or is the Bitcoin Hack system a scam that’ll just end up costing you money instead?

Thankfully you’ve landed in exactly the right place to find out as I’ve taken a closer look into it to see what’s really going on & in this honest review I’m going to be sharing the full truth of how it all works & whether or not you can really make money with it as they claim.

What Is Bitcoin Hack?

The Bitcoin Hack system is a system that claims to have been put together by the so-called “real” creator of Bitcoin & it’s allegedly been designed to enable you to generate massive profits entirely on autopilot.

So basically there’s absolutely no proof that the person behind the Bitcoin Hack system is the actual creator of Bitcoin (and to be honest it’s just a ridiculous claim), but anyway, the concept is that he’s apparently generated the system to exploit a loophole which will enable you to generate profits with ease.

You’re told that all you need to do is sign up, make a small deposit and “run his system” to begin making money. The system is said to do everything on your behalf & you can allegedly just sit back & watch the profits begin increasing in your account…

On top of that, the system is said to be completely free… So what’s the catch I hear you ask…

Well, the catch is that the whole thing is actually just a binary options scam – and the reason I can tell you that so confidently right from the off is that I’ve seen this exact same scam several times before.

I’ve already exposed it under several different names these past 2 weeks alone – such as the Auto Bitcoin Generator & the Britcoin System. The creators of it just keep changing the name & design a little to escape the negative reviews so that they can continue parting people with their hard-earned cash.

Don’t worry though – I get it – you’re probably not just wanting to take my word for it when I say it’s a scam… After all, I appreciate you might have thought you had stumbled across a potential goldmine… So instead, keep reading & I’ll show you exactly how it really works (or should I say doesn’t work) so you can see for yourself what’s going on.

How Does Bitcoin Hack Work?

Well like I mentioned above the idea is that the Bitcoin Hack system exploits a loophole, so all you need to do is sign up, make a small deposit with their “recommended” broker & then let the system do its work to generate you profits on autopilot…

However, it doesn’t quite work like that in reality.

And that’s the true intention of the Bitcoin Hack system – to get you to make a deposit with the broker they recommend to you. The whole thing is nothing more than a ploy to do just that, and after depositing (which I don’t recommend) you’ll merely be left to find out the hard way that the whole thing doesn’t work as promised.

Instead of making profitable trades like it claims it will, it’ll make nothing but losses… And if you think you’ll be able to get your money back from the broker then think again because the broker is in on it too.

Therefore overall the only people really making from the whole thing are the creators & the affiliated scam brokers. There is absolutely no way that the system will help you make any money at all.

The worst part is that the brokers who are associated with these types of scams have been known to falsify profits to trick people into depositing even more money. They make it seem like they’re profiting by faking the trades in their accounts & encourage them to add more money to profit bigger… But again sadly those people will be inevitably left to find out they’ve been scammed (despite thinking they were profiting).

I actually just recently wrote about the effect that exact “trick” had on a single mum and her kids here.

And the biggest red-flag of all? Well, that’s the fact that the whole thing is affiliated with a binary options broker! You see binary brokers don’t add fees to trades – instead, they only make money when people lose… So why would they pay commissions to the person who had (supposedly) created a system that guarantees all of its members to make profits?

There’s no way they would – it would put them out of business.

The real reason they’re paying commissions to the person behind the Bitcoin Hack system is that they know 100% that all of the people who join via that system are going to go on to LOSE money.

Which brings me right onto…

Is Bitcoin Hack a Scam?

Oh, 100%, without a doubt the Bitcoin Hack system is a scam. It’s entirely built upon lies & deceit & its sole intention is to trick you into handing over your cash so that the creator & “recommended” brokers can earn some money at your expense.

There is absolutely no way the system will really help you make money like it claims it will & for that reason there is no way I will be recommending it to you because it will just leave you disappointed & out of pocket.

The truth is that the internet is great & it provides many opportunities for making money but it’s not magical & none of the opportunities are going to make you lots of money without you having to do much in return. Anything that promises that it will is likely a scam.

However it is indeed possible to build a good income online – it’s just that in order to make it happen you must be prepared to put in the work. If you are prepared to do that though & you do still want to make money then I suggest you join Wealthy Affiliate – it’s there that you’ll learn how to properly get started online.

But ultimately whatever you decide to do I just hope that my review here has helped you save your hard-earned cash & I hope you found it insightful. If you do happen to have any further questions then don’t hesitate to leave them below & I’ll get back to you as soon as I can. Feel free to leave any comments there as well.