UBA Tracers (short for Unclaimed Bank Account Tracers) is a newly launched website that claims it needs help processing unclaimed bank accounts & promises to provide its visitors with the opportunity to earn up to $37.25 per hour from home if they’re willing to help them out… 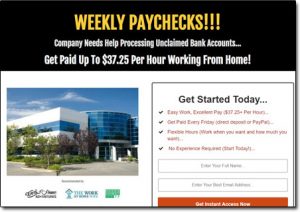 The UBA Tracers website even claims that people have made hundreds of thousands of dollars through their website whilst working flexible hours… But is UBA Tracers legit? Or is it just a scam that’ll somehow con you instead?

What Is UBA Tracers?

UBA Tracers (which as mentioned above stands for Unclaimed Bank Account Tracers) claims to be a website that helps reunite people with their lost funds, otherwise known as unclaimed funds.

So as an example if you find an account containing $1,000 in the unclaimed money database & you process the worksheet required for UBA Tracers to help reunite the owner with the money, they claim they’ll pay you $100 in return.

It sounds like a nice & easy way to make money right?

And it almost sounds legit?

UBA Tracers seem like they’re offering a service that could actually be true… They make out like they’re helping people to get their lost money back & they claim that all they do in return is take a percentage which seems logical.

And there is actually such thing as “unclaimed money”, so you might be thinking that UBA Tracers could actually be offering a genuine opportunity…

But unfortunately I can tell you right here from the off that they’re not, and the reason I can say that so confidently is because I’ve actually seen the UBA Tracers scam before running under the name of NorthAmeriCorp.

The name may have changed but how it works remains exactly the same, and instead of paying you the UBA Tracers website will actually just end up taking money FROM you instead as you’ll soon see below…

How Does UBA Tracers Work?

Ultimately the entire UBA Tracers website is just a ploy to trick you into purchasing some worksheets – except in short there are no worksheets, the creator is just getting you to hand over your cash so that he can earn at your expense… The “worksheets” will never actually arrive.

You see yes, like I mentioned above there is actually unclaimed money in existence (and a lot of it too). For example people may have died & had bank accounts that nobody knew about & that were not left in the will, etc…

There are many other reasons for unclaimed money too…

And basically after 10 years of inactivity this unclaimed money gets listed into databases to help people retrieve it & as a member of the public you can search through these databases to find anything you or your family think you might be owed.

But the problem comes with the whole “worksheet processing” opportunity, that bit’s the scam… In fact I actually previously wrote a full article explaining in detail about the legitimacy of worksheet processing jobs not so long ago.

You see the creators of UBA Tracers want to make it seem like you’ll be able to make money really easily (and lots of it). They want you to think that you’ll just be able to find money in these databases, fill in the details & send it to them to get a 10% cut of each one you process…

It sounds like a really nice, easy job & they make it seem like you’ll be able to make $100+ per day by doing it…

However before you can get started with it, guess what? They require you to hand over some of your own money first & this is exactly where the scam lies. They want YOU to “purchase a pack of worksheets”.

They say that you need to order to worksheets & that as soon as you’ve got them you’ll be able to proceed with the job & begin earning money.

You might be sceptical, but at just a small fee of $5 for the worksheets they’re hoping that you simply think “what the heck, I’ll give it a try” – and sadly most people do, but they’re doing this to thousands of people.

And then once they’ve got the money that’s it, you’ve been scammed – no worksheets will ever arrive because the worksheet processing thing is NOT legit (at least not in the way they claim anyway).

Like I say you can read my full article on the worksheet processor jobs scam here if you want to find out more about it (and to see the other companies that you should be watching out for that are doing the same thing).

The Red-Flags That Prove It’s NOT Legit

Well first of all there’s the fact that the whole thing simply doesn’t add up. UBA Tracers claim that they’re absolutely desperate for help & that they’re so urgently in need of worksheet processors that they’re willing to pay large amounts in return… However they’re not willing to cover the fee for the worksheets themselves.

Clearly therefore they are lying…

Plus if they really needed worksheet processors so bad they could easily get them through websites like Freelancer. On Freelancer you can post jobs & people can bid how much they’d complete them for… It’s very easy to recruit freelancers on there who will be more than happy (and qualified) to complete any tasks you need doing.

But there’s also other red-flags too, such as the fact that UBA Tracers give absolutely no information away about their company whatsoever. No names, no office address, nothing… They keep it all hidden.

Who is behind UBA Tracers? We just don’t know.

On top of that there though is another red-flag which hands-down proves it’s a scam… And that is the fact that one of the people of the so-called “proof” page is actually linked with another scam that I’ve exposed named Gold Opinions.

Take a look at the image below to see what I mean:

I used Google’s Reverse Image Search tool to search for the image on the UBA Tracers website to see if any of the members were real people or identifiable & the first one I searched was literally connected with another known scam. NOT a good sign.

Is UBA Tracers a Scam?

Yes there’s no doubt about it – admittedly the UBA Tracers scam is a very cunning one but it’s a scam all the same & it’s true intention is not to help you make money, it’s just to take it from you to make its creator wealthy instead.

The whole thing is literally just a ploy to trick you into purchasing worksheets so that you can “begin your job processing unclaimed money” however the worksheets will never arrive because opportunity is not a real one.

You can read more about the worksheet processor jobs scam here & you can also see the names there of the other similar companies that you should avoid (such as NorthAmeriCorp for one).

The good news though is that even though UBA Tracers is a scam there are still plenty of legitimate ways to make money online & one of the best ones in my opinion that I highly recommend is something called affiliate marketing.

Affiliate marketing is the same way I make most of my own money online & it basically involves you connecting people with products/services online & getting paid commissions in return… Plus there’s no limit on the amount you can earn.

If you’re interested in learning more about it then I definitely recommend you check out Wealthy Affiliate as it’s there that you can get started with it… Or alternatively check out these other great ways to make money.

But whatever you decide to do I just sincerely hope that my review of UBA Tracers here has given you a good insight into how it all really works & hopefully you can now see why it should be avoided. Feel free to leave any questions or comments below if you have anything else to add or ask. 🙂