Have you come across the new 22 Minute Profit Plan system which has allegedly been put together an “internet millionaire” named Max Steingard? 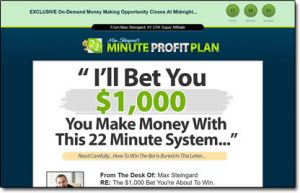 On the website promoting it, Max Steingard claims that you’ll be guaranteed to make money with his system even if you’re brand new… And he claims that if you don’t, then he’ll even pay you $1,000 out of his own pocket.

It’s certainly a bold promise & no doubt it’s probably caught your attention… But is it actually legit?

Is Max Steingard even a real person? Or is the whole thing just a scam that you should avoid?

Well, I’m really glad that you came here to my third-party 22 Minute Profit Plan review before you decided to sign up because I can immediately tell you that it’s NOT what it seems… And that Max ISN’T a real person.

What Exactly Is The 22 Minute Profit Plan?

You’re led to believe that Max Steingard who has supposedly founded the system is a well-known internet millionaire & he even claims that if you don’t earn with his system, he’ll pay you $1,000 in cash.

But the problem is that despite what he says (and shows), Max Steingard isn’t even a real person & as you can likely guess his 22 Minute Profit Plan system doesn’t really work the way he claims either.

I’ll explain more about how his system really works in a moment but first I’ll show you the proof that Max isn’t even a real person:

I used Google’s Reverse Image Search tool to run a search on the image that you’re told is supposed to be Max Steingard & as shown above, it turned out to be just a random image pulled from a stock-image website.

But you don’t have to just “take my word for it” when I tell you that it doesn’t really work as promised – instead, keep on reading & I’ll explain what’s really going on & how it all really works in finer detail below…

How Does 22 Minute Profit Plan Work?

So essentially the website promoting the 22 Minute Profit Plan system leads you towards believing that you just need to sign up, follow some simple step-by-step instructions & that you’ll then begin making money within just 20 minutes.

But what it doesn’t state is what you DO need to do… It doesn’t mention whatsoever anything about what’s inside of the system, how it actually works or what you’ll be doing…

Instead, you’re forced into handing over $47 to find out more.

And that’s exactly where the con lies…

You see in short the 22 Minute Profit Plan system is basically just your typical get-rich-quick scam in that it promises the world, asks for your money & then fails to deliver on its promises once you do.

All you really get access to after handing over your money is some extremely basic training on something called affiliate marketing.

And whilst affiliate marketing is indeed a legitimate way to make good money online the problem is that the training provided via the 22 Minute Profit Plan system won’t help you get started whatsoever.

It’s WAY too basic… But the creators of that system aren’t really interested in helping you to get started – they just want to part you with your cash so that they can earn themselves some money at your expense.

And if you think it stops at just $47, think again…

You see once you’re inside the people behind the system will put you in contact with a so-called “success coach” and you’ll be told that you need to schedule a call with this coach to move forward with the training.

The issue with this is that the coach isn’t a coach at all – it’s just a salesperson & their primary intention is to get you to spend even more money on the program (literally as much as they can get you to spend).

Don’t fall for it though because it’s all make-believe, just like Max Steingard himself. The ONLY people that’ll be earning from the 22 Minute Profit Plan system are the people that are behind it.

So how are these people making money with it if the whole thing is a con?

Well, the truth is they’re not – and just like Max Steingard none of those people are real either. The people shown in the videos are merely paid actors that have been hired from the website Fiverr.

And the woman shown in the testimonial on the sales page (penned April Collins) actually featured in a previous scam named the Greedy Mentor scam in which she was penned as Meaghan Harper as shown below:

She has also featured on the sales pages of several other scam systems too such as Explode My Payday, 7 Figure Profit Code & Your Freedom Mentor. It therefore looks like this new 22 Minute Profit Plan system is connected to all of those.

My Verdict – Is 22 Minute Profit Plan a Scam?

From a technical standpoint, they’ve kinda covered their butts by giving you access to “some” training, even if it is extremely low quality… But in my personal opinion YES the 22 Minute Profit Plan is a scam.

The reason I say that is because it’s quite clear that the website is set out to mislead you & trick you into handing over your cash for something that isn’t really going to help you like it promises it will.

The fact that the person behind it has gone to the extreme lengths of creating a false story, false creator & false testimonials just shows that he (or she) doesn’t really have your best interests at heart whatsoever.

Therefore it comes without saying that the 22 Minute Profit Plan system should be avoided because if you do sign up to it then you are just going to find yourself losing money (and potentially lots of it).

Instead, if you truly want to make good money online through affiliate marketing I would suggest you stick with a legitimate & proven training program like Commission Academy for example. It’s there that you’ll be able to achieve REAL success.

But whatever you decide to do I just sincerely hope that my review of 22 Minute Profit Plan here has given you a good insight into how it really works & I hope that it has helped you to save your cash.

If you still happen to have any additional questions or comments then, of course, don’t hesitate to leave them below. 🙂