22 Minutes To Profits is a money-making system that has allegedly been featured on the news & it promises to give you access to a “weird online trick” that’ll supposedly see you being able to earn as much as $500 per day online. 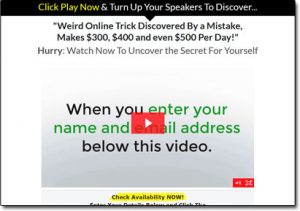 You’re led to believe by its founder Frank Stafford that you can simply just sign up, follow some simple instructions & then beginning receiving deposits directly to your bank account.

Is 22 Minutes To Profits legit or is it just a scam system that’ll see you getting conned instead?

Well, you’ll be glad that you came here to my 22 Minutes To Profits review before you signed up to it because what I can tell you right from the off is that the whole thing is NOT what it seems.

In fact, I’ve actually seen the exact thing before launched under a different name.

What Is 22 Minutes To Profits?

22 Minutes To Profits essentially portrays itself as being a “done-for-you” system for making money online & you’re led to believe that it’s been built around some so-called “weird online trick” that can see you being able to earn as much as $500 per day online.

Now we already know that it’s possible to earn $100 per day online as I wrote about it here and it’s certainly also possible to make $500 per day online too – but the reasons the claims made by the 22 Minutes To Profits system are so bold are because it claims that you can do it without any work.

You’re literally led to believe that you can just sign up, follow some simple steps & then begin making money (as shown below in the screenshot from the “news site” that is promoting it): 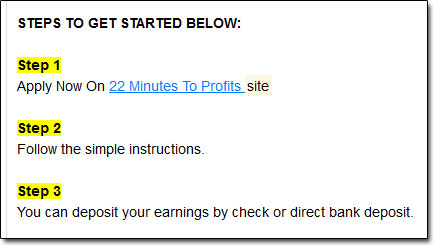 But if that were true then why isn’t everybody doing it? Why are people still working at jobs they dislike if they can simply sign up to the 22 Minutes To Profits system & earn more money without actually having to do anything?

Well the answer is because the 22 Minutes To Profits system is not what it seems… They’re not telling you the full story & that’s why they’re pressuring you into handing over your own cash first before they explain how it all really works.

The reality is that yes, it’s technically possible to make money using the method mentioned via the 22 Minutes To Profits system but I can tell you there’s a reason most people who join won’t. Instead, they’ll just end up spending money rather than actually making it…

And that’s why the people behind the 22 Minutes To Profit keep on changing the name of it – previously I’ve seen it called Real Profits Online, Retail Riches, Amazon Wealth & Website ATM…

The creator simply keeps on changing the name of it in an attempt to escape the negative reviews that surface so that he (or she) can continue tricking people into signing up & earning money at their expense.

And the “news site” that is promoting 22 Minutes To Profits is a fake, as shown below:

How Does 22 Minutes To Profits Work?

In short, the 22 Minutes To Profits program is just your typical get-rich-quick style scam in that it promises the world, asks you to hand over your cash & then fails to deliver on its promises on the other side.

And that’s the reason that they don’t go into too much detail about how any of it actually works until you’ve actually handed over your money – because that’s when you’ll discover it’s nowhere near as it’s made out to be.

It’s actually the same way I myself make most of my own money online.

However whilst you can certainly make good money with affiliate marketing (even $100 per day by following my guide) what you have to understand is that it takes work to do so.

Yes the internet is great & it provides many legitimate ways to make money however it’s not magical & none of the methods of making money are ever going to see you getting rich without having to do anything, or with only having to do very little.

Unfortunately though the guys behind systems like 22 Minutes To Profits realize that many people don’t truly understand that & they prey on it. They trick people into thinking that they’ll be able to make money really quickly & easily but it’s simply not possible.

But there’s another problem with 22 Minutes To Profit, which is the fact that even after spending your money on the program they still don’t really provide you with an adequate level of training to help you get started.

They basically just explain what affiliate marketing is, but don’t actually show you how to do it…

If you want to stand a good chance of making good money with affiliate marketing then I believe it’s crucial that you have solid step-by-step training, such as the training that’s found over at Commission Academy.

How Does Affiliate Marketing Work?

So as an example you could sign up as an affiliate of Amazon (which is free to do) and then you’d be able to promote any of the products found on the Amazon website & you’d earn money if somebody purchased them.

Here’s a visual rundown of the process:

But obviously the key to success is knowing how to get people to click on your links & that’s what training programs like Commission Academy teach you how to do.

They teach you the best ways to get as many visitors as possible to your links so that you stand the best chance of making the most money. Plus Commission Academy also provides you with tools to greater your chance of success too.

And that’s one of the big problems with 22 Minutes To Profits – the training they provide is just junk. They’ve basically only included the training to try & prevent you from getting a refund… They don’t really care about your success.

Is 22 Minutes To Profits a Scam?

Yes, in my opinion, the 22 Minutes To Profits system is definitely a scam & the reason I say that is because even though you do get access to some “basic training” on affiliate marketing, I believe it’s just set out to trick you into handing over your cash. They don’t really care about your success.

Like I mentioned throughout this review it is indeed possible to make good money with affiliate marketing & there are legitimate places where you can learn how to get started such as Wealthy Affiliate, but 22 Minutes To Profits is basically just full of hype.

In in my opinion, it’s simply been designed to make its creator wealthy, not you – and he (or she) will be getting wealthy at your expense.

So for that reason I am not going to be recommending 22 Minutes To Profits and instead if you truly want to stand the best chance of finding success with affiliate marketing I would suggest you check out a proven program like Wealthy Affiliate.

Or alternatively, you can check out these other great ways to make money online.

But whatever you decide to do I just hope that my 22 Minutes To Profits review here has given you a good insight on what you can actually expect from the program & I also hope it has helped you to save some cash.

If you have any further questions or comments though then of course don’t hesitate to leave them below. 🙂