The Club 365 website which has allegedly been put together by a guy named Justin Powell claims to be an invite-only membership site that harnesses “wealth creation secrets” for generating up to $1,297 per day online. 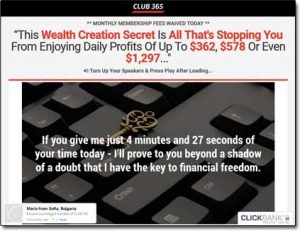 But is it really legit? Or is Club 365 a scam that’ll just end up costing you more money than you ever actually make?

Thankfully if that’s what you’ve been wondering you can rest assured you’ve landed in exactly the right place to find out as I’ve taken a closer look into how it all works myself & in this honest review I’ll be uncovering the truth about what’s really inside (and whether or not you can make any money).

As I briefly touched above, Club 365 is a membership only site that claims to provide its invitees with access to the latest & greatest ways to make money online… Ways that will allegedly enable to earn the club members to earn as much as $1,297 with ease…

You’re told that the whole thing has been put together by a guy named Justin Powell and that you can get access to the club for just $27.99 “before it closes”… But why is the entry fee so cheap?

I mean if the club really can provide you with ways to generate $1,297 per day online, and really provides you with over $8k+ worth of value as claimed then why isn’t the creator Justin charging more for it (or just making it free)?

Right from the off, it sounds an awful lot like a typical get-rich-quick scam to me! You know the type – they promise the world but don’t give you access to any of the actual methods until you hand over your cash… And then they just leave you to find out the hard way that you were tricked & that the whole thing isn’t anywhere near as easy as promised.

I expose those types of scams every single day… Just yesterday alone I exposed two named the EZ Bay Payday scam & the 30K in 30 Days scam, so it’s safe to say I know the tell-tale signs, and I can tell you that the Club 365 website displays all the signs of a scam.

But is it? Or can you really make any money from it? Well keep reading & that’s exactly what I’ll reveal below when I show you how it all works…

Yes, you read the right – fake name… If you take a look below you’ll see a screenshot of the very well hidden disclaimer I found on the site that states a pen name is being used to hide the real creator:

So why would the creator of such an allegedly amazing program that could easily enable people earn lots of money decide to hide behind a fake name? I think you probably know the answer to that question.

The answer is because, in reality, the whole Club 365 thing is nowhere near as great or as amazing as it’s made out to be – and instead of helping you make money like it claims it will the truth is that it’ll probably just help you LOSE money instead.

You see whoever is really behind the whole thing has put together a whole bunch of scarcity tactics (such as pretending that it’s going to be taken down at any moment or that monthly fees will be added) & has priced it at a clever point where you think “what the heck, I’ll try it out”… And that’s exactly what they’re hoping for.

They just want to essentially trick you into handing over your cash so that they can earn some money at your expense – and whilst you do indeed get access to “the club” as promised, in my opinion the information is nowhere near as good as it’s made out to be – and it’s certainly worth nowhere near the value they claim it to be worth.

Then, the reason they’ve priced it so low is simply in the hope that you’ll forget about getting a refund & will just write it off as a hard lesson learned instead…

I mean for example without factoring in any of the upsells, if even just 1,000 people bought into the Club 365 program and only half of them decided to pursue a refund, the creators would still pocket a whopping $13,995… And that’s just from 1,000 people – it’s more than likely the people behind it are actually suckering tens of thousands into it each month.

The truth is that you can actually make good money online like the creators of the Club 365 program, but the Club 365 program itself is not going to be the program to help you do it. If you really want to get started properly you need a proven & legitimate platform like Commission Academy instead – it’s there that you’ll truly learn how to find success.

What Do You Actually Get Inside Club 365?

So as a member of the Club 365 site you basically get access to the following:

The website claims that all of the training mentioned above which is found inside of the club is valued at over $8k but as far as I’m concerned that’s just total nonsense & I feel it’s just another trick to encourage you to hand over the $27.99 joining fee.

Most of the information inside of the club can actually be found elsewhere online for free – despite Justin (the fake creator) claiming that “gurus” have tried to pay him thousands of dollars not to share their “secrets”… That too is just nonsense as well.

Well I mean from a technical point of view it’s not really a scam as such since you do actually get provided with some training in return for your money, but as far as I’m concerned the site is very misleading & so, in my opinion, I am going to say that I do personally believe it to be a scam.

The reason I am saying that is because whilst you do get training, the chances of you making the amounts of money the creator promises you will are very slim – and I feel the creator is only making those promises to trick you into handing over your cash.

So ultimately if you did buy into the Club 365 I think you would find yourself pretty disappointed at what you receive, especially when there are much better places to get started online like Wealthy Affiliate… Therefore I am not going to be recommending the Club 365 program to you at all.

Hopefully, though my review here has given you a good insight into the program & hopefully can see why I’ve come to that decision. I also hope my review has helped you save your cash too. Also, without having to hand over money to the Club 365 site you can see a free list of ways to make money online right here.

If you do however still happen to have any questions or some additional comments you’d like to add then don’t hesitate to leave them below & as always I’ll do my best to get back to you as quickly as possible.