Welcome to my Crypto Cash Pool review. This is one of the latest cryptocurrency money-making schemes to launch & it claims that by inviting just 2 people to the company you can generate an extremely large automated income through their opportunity. 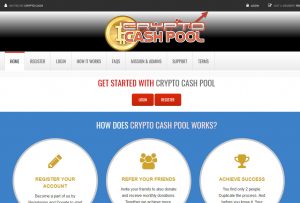 The company has certainly been generating a lot of interest but there are already a lot of mixed reviews & as a result, people are uncertain as to whether or not they should invest.

Thankfully, however, if you’re one of them then you can rest assured you’ve landed in the right place because in this review I’m going to be uncovering everything there is you need to know.

What Is Crypto Cash Pool?

Crypto Cash Pool is a company that claims it can help you earn more from Bitcoin investments & claims that it can help make Bitcoin investing more accessible & profitable for people who have lower funds to start out with.

Rather than merely investing in the BTC coin (or part of the coin) & hoping that its value will increase enough for you to make money Crypto Cash Pool gives you the opportunity to earn more through their scheme by “combining investors”.

You’re led to believe that you can start out by investing 0.001 BTC & that if you then successfully recruit 2 other people into the opportunity you will, as a result, earn a grand total of 8 BTC, without actually having to do anything…

However, I’ll admit that right from the off it looks exactly like a Ponzi scheme & to be honest I wouldn’t be surprised if it was because I’ve reviewed hundreds of cryptocurrency opportunities over the past few months alone & nearly every one of them has turned out to be a scam.

Just to highlight the problem 10xBitcoin was a company I literally reviewed just yesterday which looks almost identical to Crypto Cash Pool & that too also made bold promises but later turned out to be nothing other than a risky (and illegal) Ponzi.

But that isn’t the only one – Home BlockCoin & USI Tech are two others I’ve also reviewed this week as well so as you can see the problem is huge so it’s vital when looking into these kinds of opportunities to always do your due diligence.

How Does Crypto Cash Pool Work?

To be honest there isn’t actually a great deal to the company & that’s what made me arrive so quickly at the assumption that it was a Ponzi scheme because it literally just hosts a pyramid style investment plan.

There are no products for sale & that’s the huge red flag because if there were products then the scheme could potentially be legitimate but without them, it’s obvious people are only investing on the promise of a return, only that return is not guaranteed.

You see without products this means that the only money coming into the company is from new investors who are depositing money, so once the investors stop coming so will the money – which will inevitably cause the scheme to collapse.

That’s one of the reasons why the creators choose to hide their details from the company website, because this way when it collapses it means they’re able to simply start up another company under a different name shortly after to keep making money… So the owners don’t lose, but the members do.

It happened just recently with a company called My Advertising Pays, it collapsed, closed down & then shortly relaunched under the name of The Advert Platform which is currently conning even more people out of their cash.

So before I show you exactly how the compensation plan works here’s 2 important things for you to note:

If you notice any of the 2 things mentioned above then I personally would steer clear of the company.

As mentioned above to make money with Crypto Cash Pool you’ll need to first invest 0.001 BTC which currently equates to around $6.60, then after that, you’ll be required to recruit 2 other people into the opportunity who also have to make a similar investment.

Below you’ll see a screenshot of their 2×5 matrix compensation plan:

You’re led to believe that if all goes to plan & that if every 2 people you bring in also bring in 2 people as well then you’ll generate a grand total of 8 BTC which equates to around $53,063 at the current moment in time, all from a mere $6 investment.

Obviously, this is CRAZY & it’s the exact same way a similar program named 50 Cent Freedom worked which claimed you could generate a 5 figure monthly income all from a 50 cent investment.

You would probably be more likely to win the lottery than have a full run of every person under you recruiting 2 people because the chances of that happening are just nearly impossible, and once one person breaks the chain the whole potential is ruined.

Is Crypto Cash Pool a Scam?

Yes, it’s clear to me that Crypto Cash Pool is a Ponzi scam because there are absolutely no products & the only reason people are investing cash is to potentially make money through the opportunity.

This means that the money being paid out to investors is coming directly from the investors beneath them which see the scheme ultimately collapsing when new members stop signing up & that will see the people who’ve already invested parted with their cash as the creators decide to shut up shop & disappear.

And I’ll admit, there’s certainly the potential to make money through these schemes providing people keep investing beneath you but there are quite a few problems associated with it. The first one is the risk because there’s no telling whether or not people are going to keep investing or not after you invest but secondly there are the moral issues because ultimately you’re making money at other people’s expense.

Do you really want to be responsible for bringing people into a scheme that could ultimately collapse just to make a few bucks? I really hope not.

So overall as you can imagine I won’t be recommending this opportunity & instead I’ll be giving it a big thumbs down because the chances are if you sign up you’ll end up losing money as a result.