Crypto Engine is the name of an online trading system which claims it can trade cryptocurrency entirely on your behalf & see you generating automated profits within just a mere 24 hours of getting started. 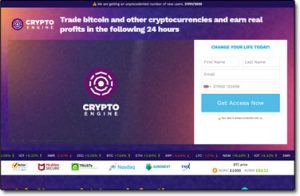 You’re led to believe that all you need to do is simply sign up, make a small deposit & then “activate” the system… From there the system will supposedly take care of the trades so that you can just sit back & earn money…

But is it actually legit? Or is Crypto Engine a scam system that you should avoid?

Well, I’m really glad that you decided to do your due diligence before signing up & came here to this review first because I can tell you right from the off that the Crypto Engine system is NOT what it seems – and it won’t really help you make money.

What Is Crypto Engine?

Crypto Engine essentially portrays itself as being an automated trading system that can supposedly generate you an income entirely on autopilot by making profitable trades on your behalf.

Even if you don’t happen to know the first single thing about trading you’re led to believe that you can just simply sign up, deposit some money & then “activate” the system to begin earning you money.

The website even states that if you join the Crypto Engine system you’ll be putting yourself in a position to earn from a so-called “Bitcoin boom” which will allegedly (according to them at least) see you becoming a Bitcoin millionaire.

But is it really legit? Can you really earn money so easily?

Or is it too good to be true?

Well in an attempt to trick you into thinking that it’s legit, the people behind Crypto Engine have tried to claim that the software has been featured on various news sites such as the Express & Forbes, but I can tell you right now that it hasn’t.

The scam is known as a binary options scam & the people behind these scams just keep on pushing out new systems under different names in an attempt to escape the reviews which expose the truth so that they can continue tricking people into joining.

Some of the other names I’ve seen this same scam launched under include the Bitcoin South African System, Bitcoin Compass App & the Bitcoin Capital software.

Even though the names & appearance keeps changing a little, the scam at the heart of it remains exactly the same… But of course, you don’t have to just take my word for it when I say that – instead keep on reading & I’ll show you exactly how it all really works below.

How Does Crypto Engine Work?

So the idea, in theory, is that you’ll be able to sign up to Crypto Engine, deposit some money with the broker that they recommend to you & then activate their system to have it begin making trades for you on your behalf.

From there you’re led to believe that you don’t need to do anything else & that the system will just continue to make money for you whilst you sit back and relax.

However, none of that’s true.

You see there are 2 very important things which the Crypto Engine website fails to make clear. The first thing is that the broker you’re recommended to deposit with is what’s known as a binary options broker…

The second thing is that the people behind Crypto Engine get paid a commission by the broker if you happen to sign up with them after going through their site.

And when you couple these 2 things together, it literally proves that the whole thing is a scam.

This means that binary options brokers only make money when you lose money since if you win they have to pay you the winnings out of their own pocket (as you essentially played a bet with them).

So with that in mind, ask yourself this – why on earth would a binary options broker (who only earns money when you LOSE money) pay commissions to the creator of a system that could supposedly guarantee you profits?

The answer is that they wouldn’t. The real reason they’re paying the person behind the Crypto Engine system commissions is because they know that the system is actually set out to make you LOSE money, not earn it.

But That’s Only The Beginning of the Trickery…

But nope, unfortunately, the scam is actually much more cunning than that.

The problem though is that the profits & successful trades that it shows are all fake. The software is a complete phoney & it’s just been created to trick you into depositing even more money.

The creator just wants to make you think that you’re actually earning money so that you’ll be more likely to deposit more money to “increase your profits”… But the system isn’t really connected to any live markets.

Essentially it’s nothing more than a video game.

So you’ll only be left to discover that the whole thing is a scam when you finally attempt to make a withdrawal because the withdrawal will never get processed. By then though you could have lost thousands, maybe even tens of thousands…

First of all, we have the fact that like I mentioned at the start of this review, the Crypto Engine scam is a scam that I’ve already seen before under various different names like the Bitcoin Compass App & the Bitcoin Capital software.

Then there’s the fact that as I also mentioned it literally doesn’t make sense, because there’s no way a binary options broker would pay commissions to the creator of a system which could guarantee profitable trades.

But on top of that, there’s also more proof that it’s hands-down not legit, such as the extremely small disclaimer (shown below) which reads “All characters, information and events depicted on This Website are entirely fictitious. Any similarity to actual events or persons, living or dead, is purely coincidental“:

Then there’s the fact that not only does the Crypto Engine website display no license (which is a requirement by law for an investment website), it also fails to display any information about who’s actually behind it.

So depositing money with the Crypto Engine system would just be like handing over money to a stranger in the street. You may never see them again.

And you should never deposit money into an investment/trading related website if it fails to display verifiable details of a license to operate because if you do, you’ll have no protection whatsoever against your funds.

Is Crypto Engine a Scam?

The Crypto Engine system is definitely a scam, there’s no doubt about that. The whole thing is just a trick to get you to deposit with an unlicensed binary options broker & it doesn’t really work as promised.

So rather than being set out to help you make money, the Crypto Engine system is just set out to make you lose it – and due to the level of trickery involved you could end up losing lots, so it’s best avoided.

It basically comes back to the good old saying that “if it sounds too good to be true, it probably is”… You see yes, there are indeed many legitimate ways to earn online but none of them will see you earning lots of money quickly or easily.

If they did, then everybody would be doing it, nobody would be left working a job. Yes, it’s possible to earn online but in order to earn good money, you must be prepared to put in the time & work required to make it happen.

The good news though is that if you are prepared to do that then there are legitimate places like Commission Academy which will teach you step-by-step exactly how you can get started.

Plus if you like you can even read my own guide for generating as much as $100 per day online right here.

But whatever you decide to do I just sincerely hope that my honest review of Crypto Engine here has given you a good insight into how it all really works & most importantly I hope it’s helped prevent you from getting caught out by it.

If you do still happen to have any further questions or comments though then, of course, don’t hesitate to leave them below & I’ll do my best to get back to you as soon as I can. 🙂