The Free Biz Account system claims that without any catches or gimmicks it can provide you with a way to earn a full-time income online from the comfort of your own home without having to spend so much as a single penny. 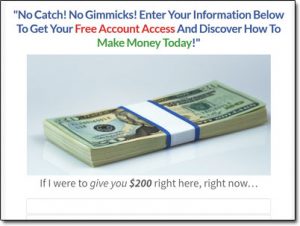 William Tellers, the guy who’s allegedly behind it all even claims that he’ll personally invest $200 for you to get started with it…

But is it actually legit, or is Free Biz Account a scam system that’ll just result in you spending money rather than actually making it?

Thankfully you’ve landed in exactly the right place to find out because I’ve taken a closer look into it to see exactly how it all works & In this review, I’ll be uncovering everything you need to know – including of course whether or not you can really make money with it.

The Free Biz Account system which has allegedly been put together by a guy named William Tellers is a so-called “free” system that claims it will help you to earn a lot of money online from home, even if you have no previous experience…

For example, the first thing that I can tell you right from the off is that the whole thing is certainly not free like William claims – instead, after sitting through 2 long sales videos you’ll be left to find out the hard way that you were lied to & that the system actually costs at least $97…

And if you think William is really going to invest $200 for you, think again…

Well, the simple truth is that the Free Biz Account system doesn’t work – at least not as promised anyway… The whole thing is just a get-rich-quick scam that’s been designed to part you with your cash.

The so-called creator, William Tellers is a fake (as shown below):

A quick reverse Google image search revealed that the photo of so-called “William Tellers” has just been pulled from a stock image website. The creators have just used this fake name & photo to hide their real identity…

And why would they want to do that?

Simple – because the only thing they’re set out to do wit this Free Biz Account program is part you with your hard-earned cash to make themselves wealthy at your expense… The whole thing is just a big scam.

So here’s what really happens…

After sitting through 2 long sales videos which basically do nothing other than tell you how amazing this “secret” method is, you’re eventually presented with a prompt to buy into the program for $97…

But what you likely don’t realize here is that the Free Biz Account system itself doesn’t actually exist. The whole website is actually just a ploy that’s been put together to get you to buy into something named My Ecom Club…

So after handing over $97 for the “coaching services” (which I don’t recommend you do) what you’ll be left to find out is that you’ve actually bought the $97 Gold Membership over at My Ecom Club.

So I don’t even think the creators know what they’re trying to trick you into buying!

But anyway, I know what you’re probably left wondering…

What Is My Ecom Club?

Well, My Ecom Club is apparently an entirely different program altogether – though to be honest whilst I can’t prove it, the creators of the My Ecom Club program have likely also put together the Free Biz Account system.

Anyway – My Ecom Club is a program that claims to teach you how to make money online through something called e-commerce – which basically involves selling products online through sites like Amazon.

Now I’ll admit that the My Ecom Club website looks an awful lot more convincing & less “scammy” than that of the Free Biz Account, however, there are still a few worrying things I want to point out right off the bat…

However the name did sound extremely familiar, and then it dawned on me… Rocky Lin was the same name used in the My Secret Sites scam that I previously exposed… He was supposedly the creator of that too.

However, the truth is that the My Ecom Club website is brand new, and it was actually only first pictured by the WayBack Machine (as shown below) on the 4th of January 2018… It wasn’t even online in April of 2017.

Can You Actually Make Money With It?

After reading through what I’ve just shown you above you’ll likely agree with me when I say the whole thing certainly looks dodgy… But no doubt you’re still wondering whether or not you can make any money with it… After all, that’s why you were interested in it in the first place right?

And the other is the Inner Circle Membership which costs $27 per month & supposedly provides you with: 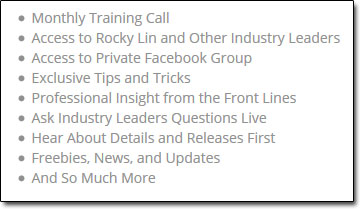 So essentially all you’re getting access to is some training, a Facebook group – and a coach who is likely only there to upsell into other high-ticket (aka expensive stuff) that’s hidden away behind the scenes…

This means that yes – providing the training is up to scratch you could potentially make money as a result of following it, but the likelihood is that you’ll just end up spending more money than you’ll ever manage to make.

You see typically coaching costs hundreds (if not thousands of dollars) per hour… So when a program claims to offer you a “free coach” you can generally assume that the coach isn’t really a coach and that they’re just there to push you into spending more money as you progress through the program… AWOL Academy is another program that also works in a similar way.

But I’ll be honest here, I didn’t even purchase the My Ecom Club program to try it out because as soon as I seen all the trickery involved with the Free Biz Account system & all of the potential links it had to previous scams there was just no way I was going to put my money at risk with this thing.

And to be honest I wouldn’t recommend you to either…

The truth is there are already several good, legitimate & proven programs around such as Commission Academy for example… There’s no need to risk your cash with a dodgy looking system like My Ecom Club or Free Biz Account.

Heck in my opinion even The Wealth Network (which I didn’t recommend) looks better than this thing.

Well, I can say confidently that yes, in my opinion, the Free Biz Account program is a scam… And I will also say that whilst the My Ecom Club program looks more legit, it too is potentially a scam as well.

Obviously I can’t verify whether that My Ecom Club program in particular is or isn’t a scam since I admittedly never tried it – but it has a whole lot of potential links to previous scams & in my opinion it all looks very dodgy.

And the reason I say the Free Biz Account system is a scam is that it’s extremely misleading & the whole thing is built upon lies. It’s clear to me that the creator of that system is just looking to make money at your expense… He or she (whoever is really behind it) doesn’t really care about your success like they lead you to believe.

Ultimately I think if you buy into either one of these programs you will likely end up finding yourself disappointed at what you actually receive, so therefore I won’t be recommending either of them to you.

Like I mentioned above there are many legitimate & proven programs out there like Commission Academy that you can get started with… There is simply no need to put your money at risk with something like the My Ecom Club program… And if you do, then as far as I’m concerned you will probably just end up spending more money than you ever actually manage to make.

But anyway that’s my 2 cents on this whole thing… Hopefully, you found the review useful & hopefully it gave you the insight you were looking for into this whole thing. If you do happen to have any further comments or questions then don’t hesitate to leave them below & I’ll get back to you as soon as possible.