Gaming Jobs Online claims to be number #1 gaming jobs website since 2008 & promises its visitors that it can provide them with easy access to video game tester jobs that allegedly pay on average a whopping sum of $49,063 per year… 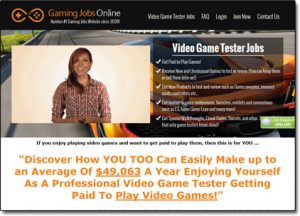 Plus on top of getting paid to play the video games they even claim that you’ll find yourself getting sent new & unreleased games to test which you can later sell on profit, which almost sounds like any video gamers dream…

But in order to get access to the so-called high paid video game tester jobs through Gaming Jobs Online you’re firstly asked to hand over some of your own hard earned cash which makes the whole thing seem a little suspicious.

So what’s the truth about it? Is Gaming Jobs Online legit & can you really make good money playing video games like they say you can? Or is it just a scam that’ll end up seeing you spending money rather than actually making it?

Well thankfully you’ve landed in the right place to find out because right from the off I can tell you that Gaming Jobs Online is NOT what it seems & in this honest review I’m going to be uncovering the real truth about how it works.

What Is Gaming Jobs Online?

And some of those other perks include the following;

Of course along with the opportunity to allegedly earn an average of $49,063 by testing games from the comfort of your own home.

Plus what’s more, they even claim that you can begin earning within just 24 hours of joining… And you’re supposed to be able to get access to all of this for just $27/mo (which they initially discount to just $1).

But it all just sound WAY too good to be true right?

I mean if you could really earn so much money so easily right from the comfort of your own home just by playing video games then why on earth isn’t everybody doing it? Why are people still working jobs if this is real?

Well the answer is because it’s NOT real.

I mean yes, it is indeed possible to make money by testing video games (and you’ll see how further down in this review) however the Gaming Jobs Online website itself is NOT legit & it will not help you to do it.

How Does Gaming Jobs Online Work?

However the truth is that after handing over your $1 to get access (which then automatically signs you up to a $27/mo subscription unless you cancel) all you’ll really be getting access to is some links to other websites.

And not only can most of those websites be quite easily found via Google search, but most of them that are listed are now defunct… They just take you through to dead webpages or deleted sites.

Plus because there isn’t really a great deal of websites that list gaming jobs they also list a bunch of paid survey websites which are totally unrelated from video game testing just to try & pad their members area out a bit & make it a look a bit better.

And I’m going to be honest here, as you can imagine there is a lot of competition when it comes to applying for video game testing jobs – so whilst there are some legit ones, the chance of you bagging one is pretty slim.

Oh & most of them are not work from home like Gaming Jobs Online makes out – in fact I don’t think I’ve ever seen a legitimate video game testing job that you could work from home.

Most of them you have to travel for because your gameplay has to be monitored under specific conditions.

However there is an alternative way which you can make VERY good money from by playing video games, and you can work it from home too… Plus you can even get started with it for free thanks to Commission Academy.

But how does it work? Keep reading…

One of the best & easiest ways for anybody to begin making money by playing video games is through something called affiliate marketing. You can play video games, review them (or record gameplay) and earn commissions.

Basically all they do is affiliate themselves with various game-related companies (which is free to do) and this means that they can then promote any of their products (such as games, consoles etc) in return for commissions.

So let’s say you’ve bought a new game – you could record your gameplay, upload it to YouTube and then recommend related products which if people bought would then earn you commissions.

Or if you don’t like recording videos you could simply write a review about it or a walk-through instead, and you can actually follow my free guide here to see how you can start a blog for free & make money as an affiliate.

The best part about this is that if your website gets enough traction then many of the companies will even begin sending you things for free so that you will review them & give them exposure to your followers.

So if it sounds like something you’re interested in I’d highly recommend you check out Commission Academy which is a training program that shows you how you can get started with affiliate marketing & make money.

They also provide you with all of the tools you need as well, and you can get started for free.

Is Gaming Jobs Online a Scam?

From a technical standpoint they’ve “covered their butts” by providing some links to websites in their members area through which you can potentially earn money by testing video games… However most of the websites are now defunct, and there is no guarantee that they will accept you.

In my opinion though I do believe Gaming Jobs Online is a scam because it is extremely misleading & what you are provided with realistically is NOT what you were promised.

You were promised that you’d be able to easily make lots of money by testing video games & that you can even begin making good money within just 24 hours of getting started, but that is going to be very unlikely to happen.

Basically the whole website is just full of misleading, over-hyped claims that have been put together to trick you into signing up so that the creator of it can earn some money at your expense.

The website hasn’t really been launched with you in mind whatsoever & I doubt that anybody who has signed up to Gaming Jobs Online has gone on to actually make money testing video games as a result.

Like I mentioned a little earlier in this review though it is indeed actually possible to make money by testing video games and one of the best ways (in my opinion) to do it is through something called affiliate marketing.

By becoming an affiliate (which you can learn how to do over at Commission Academy) you’ll  be able to simply publish your thoughts, reviews & content related to video games & earn money by recommending products in return for commissions.

Plus one of the other great things about affiliate marketing is that your earnings are totally uncapped. The harder you work the more money you will be able to make – and you can even setup your affiliate website for free.

So yeah, overall it comes without saying that I won’t be recommending the Gaming Jobs Online website to you because in my opinion I do believe it is a scam & I don’t think it will help you whatsoever. It’ll just see you trapped in a $27/mo subscription & potentially being pressured into spending more money.

Hopefully though my review here has helped you to dodge it & I also hope that it has given you a good insight into how you can really make money by playing games. If you have any further questions or comments don’t hesitate to leave them below. 🙂