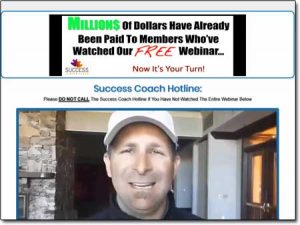 You’re led to believe that all you need to do is watch a video, schedule a quick call with a “success coach” & follow a few simple steps to begin making 5 to 6 figures per month online… But is it really that easy? Or is the Leveraged Breakthrough System a scam that’ll just end up parting you with your cash?

Thankfully if you were wondering either of those things you’ve landed in exactly the right place to find out the answers as I’ve taken a closer look into it all & in this review I’m going to be uncovering everything there is that you need to know… Including whether or not you can really make any money with this program.

What Is The Leveraged Breakthrough System?

The Leveraged Breakthrough System claims to be an “easy to understand income system” & it promises that even if you’ve never previously managed to make any money online before, the system will be able to help you quickly generate an income of 5 to 6 figures per month… But obviously that’s a pretty bold claim.

You see I’ve been working full time online for several years now & there’s one thing I’ve come to realize – there are no shortcuts to making money. I mean sure you can make good money online, but to do so you must be prepared to put in the work. Literally all of the systems I’ve come across to date that promised lot’s of money with little to no work have turned out to be straight up scams.

The good news though is that if you are prepared to put in the work to build an income online then there are actually legitimate programs out there such as Commission Academy where you can get free training on how to get started.

But anyway will the Leveraged Breakthrough System actually be any different? Will this “shortcut” system really help us cash in a “$107 billion dollar annual industry” and earn an easy income from home?…

I doubt it, but let’s take a look…

How Does The Leveraged Breakthrough System Work?

Okay so, to be honest, there isn’t really a great deal to the Leveraged Breakthrough System – the process is pretty simple & it’s something that we in the online marketing industry often refer to as a “high-ticket program”.

There have been several other similar high-ticket programs I’ve seen such as Digital Altitude & MOBE, but the FTC has shut both of those down because these type of programs come very close to being classed as a pyramid scheme… You’ll see why in a moment when I show you exactly how the Leveraged Breakthrough System works.

So basically the Leveraged Breakthrough System claims to sell “e-learning products”. The products that they offer out to their members basically consist of training related to personal development, sales/marketing & leadership.

However you can’t actually purchase any of the individual products directly – instead, you’ve got to purchase a “membership level” and some of these products come bundled with each level…

And in return for such staggeringly high prices, you’d think you’d get access to something truly amazing, but nope – not really. Instead you literally just get access to a bunch of “random” e-learning materials – materials that realistically could be found elsewhere online for free.

But the reason for that is because in reality the whole thing is just geared towards the money-making side of things & that’s why there’s no real sell on the products. Instead, the sell is on the opportunity.

In my opinion, the products are just there as a “cover-up” to try & make the whole thing seem legit & to attempt to keep the FTC off the creator’s backs for as long as possible. MOBE & Digital Altitude, the two other high-ticket companies I mentioned earlier in this review did the exact same thing & that’s why they both got shut down.

When they got shut down many of the members lost their entire investment so you have to be really careful with this sort of thing.

So How Do You Actually Make Money With The Leveraged Breakthrough System?

Essentially the way you make money with the Leveraged Breakthrough System is just by suckering other people into signing up & getting them to invest exactly as you did. If they do, you earn a commission at their expense.

But there’s a catch…

The Leveraged Breakthrough System is what’s known as a “pay to play” program. This means that you can only earn commissions on the levels that you’ve personally purchased. So as an example if you’re a level 2 member & you refer somebody who buys in at the 4th level for $21,847, despite them spending all that money you’ll lose out on the commissions because you are not qualified at that level.

You’ll just get the level 1 & level 2 commission since those are the only levels you’ve purchased.

It’s basically a scarcity tactic to push you into upgrading – and that’s why they have a big push on their “48 hour action taker bonus”. They hype you up about the potential of making easy money, get you to upgrade to the highest level so you “don’t miss out” & then sadly from there they just leave you to find out the hard way that it’s actually much harder than promised to make money.

And that’s the reason most people fail to make any money with these types of programs.

The only people who actually end up profiting from them are the experts who already have a solid background in online marketing & are able to sucker lot’s of others into the scheme.

If you’re a newbie you’ve basically got no chance at finding success with a program like the Leveraged Breakthrough System. Instead, you’ll likely just end up losing your investment & feeling disappointed.

The reason I say that is because the training on how to market the opportunity is very poor & the so-called “success coach” who’s said to be there to help you is really just a sales agent that’s there to push you towards upgrading. You don’t really get any help to get started as a newcomer & so unless you’ve already got solid experience there’s no doubt you’ll struggle to get started.

Is The Leveraged Breakthrough System a Pyramid Scheme?

A pyramid scheme is basically a money-making scheme where there’s no product or no real focus on the product. So you could actually have the best products in the world in place, but if more people are joining & purchasing purely because of the money-making opportunity rather than actually purchasing the products based on their merits then you have a problem.

I’m sure it’s probably the latter… I know that’s how I personally came across it, so I’ll let you make up your own decision as to whether or not you think it’s a pyramid scheme based on that. ?

Is The Leveraged Breakthrough System a Scam?

Plus the whole thing is crazy expensive to get started with & as a result the likelihood is that you’ll just end up losing money rather than actually making it… So whilst I’m not going to say it’s a scam, what I am going to say is that I won’t be recommending it.

Instead, if you’re a newcomer & you’re looking to make money online I’d recommend that you check out a legitimate, proven & free program like Commission Academy instead. It’s there that you’ll learn the real way to make money online & you’ll get the proper step by step training to help you get started.

So yeah overall the Leveraged Breakthrough System is going to be getting a thumbs down from me because, in my opinion rather than being set up to help you make money as it claims, I feel like it’s just been set up to make the creator wealthy at your expense instead. Oh and guess what? The creator remains anonymous too – that sure isn’t a good sign at all!

Anyway, I just hope that this review here helped you dodge it & helped you save your cash. I also hope that it helped you see how it really works, but of course, if you do happen to have any further questions or comments then don’t hesitate to leave them below & I’ll do my best to get back to you as soon as possible.

2 thoughts on “Leveraged Breakthrough System Review – Is It a Scam or Does It Actually Work?”