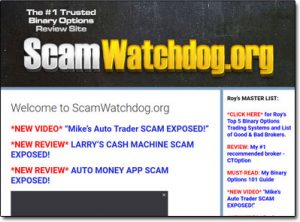 If you’ve spent any amount of time looking for ways to make money online – especially in or around the binary options sector – then Roy Tribble the name behind the Binary Options Watchdog (and also ScamWatchdog.org) websites is a name you’ve likely heard of…

He claimed to be a binary options millionaire & devoted Christian, hosting a website where he talked about both binary options trading & God, appearing to come across as a genuine, honest guy… When in actual fact he was one of the biggest binary options scammers to ever exist.

Literally every single program that was recommended via his website was a complete-utter scam, and he parted thousands – if not hundreds of thousands with their cash by tricking them into signing up to them… The guy was ruthless, but now his website & entire online presence (except for scam reviews) have disappeared… So just exactly what’s happened to Roy Tribble & his Binary Options Watchdog scam? Let’s take a look…

Roy Tribble – Just Who Actually Is He?

As you can imagine, being the webmaster of several scam websites, Roy Tribble was a pen-name & that was made evident by the fact that his name often changed depending on which of his websites you visited.

This resulted in a lot of YouTubers, scam busters & other online reviews taking it upon themselves to investigate further just who this guy exactly was, as shown in the screenshot below:

But who exactly was the REAL guy behind the pen-name?

Well, one very clever reviewer came across an ABC News interview in which a “hoaxter” named Justin Tribble created a fake website in an attempt to take down the minister Joel Osteen by making lies about him… And the hawk-eyed review spotted that in the news clip (which can be found on YouTube here) at exactly 46 seconds in Justin’s driver’s license is shown which reveals his true name is Justin Roy Tribble. 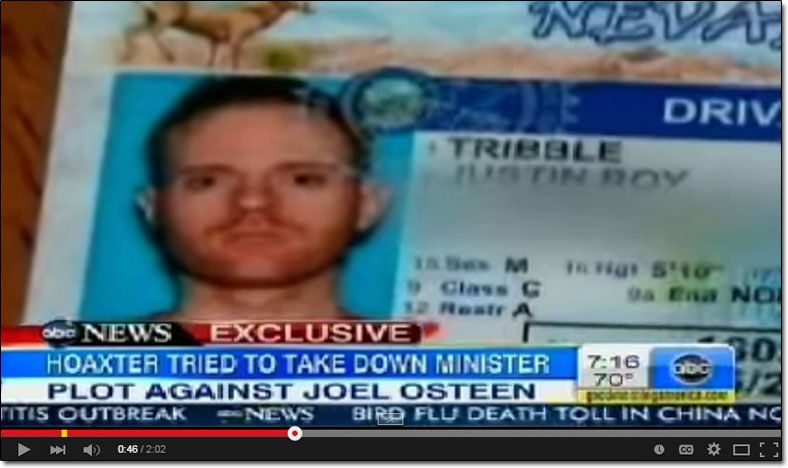 Too coincidental don’t you think? So it looks like the guy pictured above IS indeed our guy.

But anyway, it appears that this guy has been behind multiple hoaxes online, not just the binary options scams – and it sure as heck seems he knows his stuff when it comes to getting things “out there” online.

For example, the same guy appears to be behind a HUGE conspiracy theory named the Nano Domestic Quell, which seems to have scared many folks in the USA… And his theory has stuck so much (because of the lengths he went to push – including creating fake aliases) that it’s still being talked about today, around 5 years on after he initially put it out there – under the name of Dr. Bill H. Weld.

But it’s not just his conspiracy theories that he channels a whole host of effort into, oh no – he certainly put a LOT of effort into his Binary Options Watchdog scam (and ScamWatchdog) sites as well.

He was pictured on his binary scam sites to look like this: 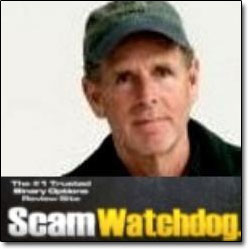 And due to the fact that he is evidently much younger in real life, he went to the extreme lengths of using software to slow down his voice in the videos & recordings that he published online – as well as putting on a fake Texan accent in an attempt to mask his true identity.

Here’s an example of that Texan accent, which you can feel free to spend some time laughing at:

He also ran “heart-string pulling” music in the background of his videos in another attempt to draw you in & almost feel sorry for him, in a sleazy effort to try to gain your trust so you’d sign up for one of his scams…

Basically, in short, there was a LOT of planning behind his Binary Options Watchdog scam, and a LOT of work put into it.

Initially, I assumed it may have just been a technical error, so I decided to wait it out a couple of days prior to publishing this post – but it now seems that all of his social media accounts & videos have also disappeared too…

So has he been sent to jail? Or was all of this just another “game” for Justin Roy Tribble like the other hoaxes he’s pulled?

Maybe he’s made enough money now & decided to call it a wrap, as it was estimated that he will have been making well over $5,000 to $10,000 per day from his scams… And now that the binary options industry is looking bleak (thank God), maybe he’s just decided to shut up shop.

Call it quits whilst your ahead as the saying goes…

I mean at present some of the listings to his website, such as the listing to Roy Tribble’s Master List (what a load of BS) still appear in the search engine result listings as shown below:

However, if you click on any of the links you’re merely taken to a page that produces a 404 not found error message like the one shown below: 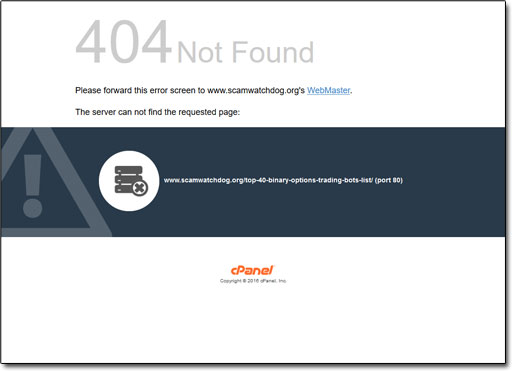 And like I just mentioned above, the same now seems to apply for all of his social media channels too…

All of his YouTube videos have been removed (as shown below): 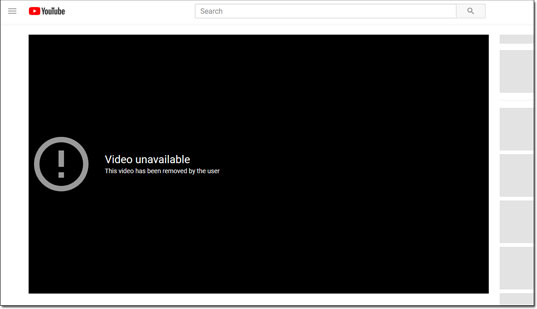 His Twitter, Google+ profiles & others have disappeared… And even his Dr Bill H Weld blogspot site has been removed too, which now presents visitors with an error message as shown below:

I believe that this also confirms that Justin Roy Tribble was indeed 100% Dr. Bill H. Weld as well, as it’s way too coincidental for all of these websites to share such common links, and for them to all disappear at the exact same time.

So regarding the whole Dr. Bill H. Weld thing & the Nano Domestic Quell conspiracy theories, I think this once and for all proves that basically it was just Justin Roy Tribble, the same man that was behind the binary options scam watchdog site, spouting a load of BS under a fake alias.

But regarding the conspiracy thing, I don’t want to get too caught up on that – I’m more interested in the scam side of things…

And I want to know WHY Mr Roy Tribble has suddenly decided to remove all this content… Has he been forced to do it? Has he been closed down? Has he gone to jail? Is he on the run? (maybe he’s in hiding with Matt Lloyd).

There are so many questions!

And what about all of his victims that lost money to his scams? How can they get their money back?

Something big has certainly happened because even his LinkedIn profile as shown below has disappeared too: 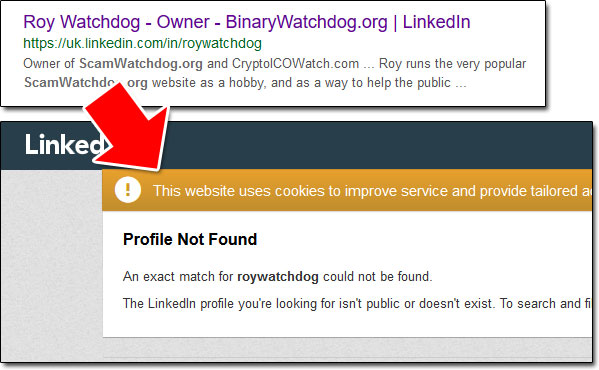 Literally EVERY trace of Roy Tribble has gone, apart from the few videos that remain on YouTube which were uploaded by third parties exposing him.

The Thing That Doesn’t Make Sense…

As you can probably tell if you take a look around my blog, I’ve done my fair share of exposing online scams – and what’s odd here is the fact that Roy Tribble has completely taken all of his sites/profiles down.

Normally when scammers get caught out or get wind that they’re going to be shortly outed they simply redirect their sites through to another scam.

Take the Money Looper scam for example – that’s just launched, but when it launched several other scams that had been exposed merely closed their websites down & redirected them through to it via an affiliate link which earns them commissions.

After all, Roy did around 4 years (or more) of promoting his Scam Watchdog & Binary Watchdog sites, so they’ll have been generating a heck of a lot of traffic (visitors)… Meaning by closing his sites down completely he’ll be losing out on thousands, if not millions – something which scammers frankly don’t tend to like doing!

And prior to that, I noticed that Roy had been through a lot of his content, rewording it & removing some of it… Which I felt was odd.

As I said at the very beginning of this post, Justin Roy Tribble was a ruthless scammer, he didn’t seem to care about what he wrote or posted – so why now had he decided to go through his posts & edit them? And why so shortly after has everything disappeared?

It’s funny that the first post to get edited was a defamatory post which “called out” several legitimate people in the marketing industry. He called them scammers because they outed him as a scam.

Some of them though were BIG names… Have they filed a lawsuit?

I’m thinking that’s looking like the likely option – that somebody has filed a lawsuit, and that the lawsuit has brought attention to his website from the authorities who have forced him to close it down.

Either way, though there doesn’t seem to have been anything posted on any official websites like the FTC about the closure, which usually is the case in an instance like this where there are so many victims…

But I’ll be keeping my eye out to see what unfolds & I’ll be updating this post when I get some news so be sure to bookmark it & keep your eyes peeled if you too have been following the Roy Tribble scam.

For now, though, do YOU have any information on the Justin Roy Tribble scam? Have you found yourself a victim of the scam? Please do leave comments below if that’s the case as I’m eager to hear more information on this… And as I say I’ll keep you updated as it unfolds.