The Secret Society of Millionaires website claims to provide you with access to a secret automated system that will allegedly see you generating profits of $2,550 per week online through some sort of “done-for-you” business. 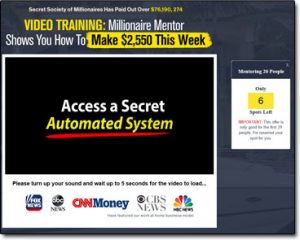 You’re led to believe that you can simply sign up, follow a handful of steps & begin making lot’s of money with relative ease…

But is it actually legit or will Secret Society of Millionaires scam you & just see you losing money rather than making it?

Thankfully you’ve landed in the right place to find out because I’ve taken a closer look into this system & in this review, I’ll be uncovering everything you need to know including how it all works and whether or not you can really make any money with it.

What Is Secret Society of Millionaires?

The Secret Society of Millionaires system claims to have been put together by a millionaire mentor & this so-called mentor states he’s going to teach you how you can quit your job, work from home & access a secret automated system that’ll allegedly see you generating a ton of money online.

It immediately reminds me of the My Millionaire Mentor scam that I exposed on here before.

You’re to believe that everything will be pretty much “done-for-you” and it explicitly states that it doesn’t involve any sort of multi-level-marketing or pyramid schemes but I can tell you right from the off that’s a blatant lie.

The reason I say it’s a lie is that the Secret Society of Millionaires website has merely been put together to push you into purchasing something called MOBE, which is a multi-level-marketing business opportunity.

So yes, it is MLM (even though they claim it isn’t).

The reason it pushes you into buying that program is that the creator of the Secret Society of Millionaires website is an affiliate of MOBE which means if you buy into it then he gets paid a commission.

So essentially the Secret Society of Millionaires website is just set out to trick people into spending money on MOBE & when you do, that’s when you’ll find out things aren’t quite as easy as promised.

You’ll also find out that you’ll be required to spend as much as $50k (yes $50,000 smackers) to get right through the full program… But you’ll soon see all that in a moment when I explain how it all works…

How Does Secret Society of Millionaires Work?

Basically the Secret Society of Millionaires system isn’t actually a system at all like it claims to be, as I mentioned above it’s just a website that redirects you straight through to the MOBE opportunity (something entirely different)… So if you buy into this “system”, what you’re actually buying into is MOBE…

And the way I initially discovered that was by taking a look at the earnings disclaimer. If you take a look at the screenshot below you’ll see that all references are made towards MOBE (because that’s the “real” program here):

As stated in that disclaimer MOBE own several other “branded offers” & this Secret Society of Millionaires system isn’t the first program that I’ve come across that tricks you into buying MOBE.

I’ve actually seen several others, such as the My 7 Figure Nest Egg program & the Ultimate Dot Com Lifestyle system…

Essentially they all do the same thing… They put their own spin on things & then push you through into buying MOBE.

Which probably leaves you wondering…

What The Heck Is MOBE?

MOBE is a program geared towards teaching people how to make money online. They sell various educational products & if you see the program right through it could cost you around $50k in total…

The reason many people sign up though (despite the price) is because MOBE claims to provide you with a sort of “done-for-you” business… So you’re kind of led to believe that you can simply sign up, follow the steps and start making money…

Now this is all fair and well, but after going through the training (and spending all the money) you’re left to find out that the way you actually make money is simply by promoting MOBE onto others…

It’s safe to say it’s a business model I’m not a big fan of & that’s why I didn’t recommend it in my review.

The whole thing’s way too similar to Digital Altitude in my opinion & that program was recently closed down by the FTC… So I wouldn’t want to be investing $50k into something which could potentially get shut down too.

Plus the other reason I didn’t recommend it was because in order to make money with it you MUST purchase the products. If you don’t, and you make a sale of that product then the commission will be passed to the person above you instead… So you’re really pressured into spending money as far as I’m concerned.

Anyway, now that you hopefully have a better understanding of MOBE let me show you how to the 2 things link together…

So What’s The Secret Society of Millionaires About?

The whole reason the Secret Society of Millionaires has been set up is so that the creator of it can earn more money by hopefully getting more people to sign up to MOBE via his affiliate link.

As I’ve just outlined above the whole way people make money with MOBE is by getting others to sign up to it… So this particular affiliate has decided to create his own sales page in order to increase sales.

The problem with it though is that it makes everything seem super easy. As I mentioned at the start of this review you’re led to believe that you’re going to be getting access to some sort of “automated system” and that you’ll be able to make money without doing anything but that couldn’t be further from the truth…

That’s why at the very bottom of the Secret Society of Millionaires website they add this disclaimer:

They make the font really hard to read too, but essentially it says that “the average person who follows any how to information gets little to no results”…

This a way of them covering their butts, because they know that if you sign up to MOBE via their website the likelihood is you’ll only end up spending money rather than making it since they’d wildly misled you…

Just to prove that point, take a look at the average income table below that I’ve pulled from their earnings disclaimer:

So yes it’s possible to make money – but clearly it’s not so easy.

And don’t forget that chart doesn’t factor in the sheer level of investment you’d have had to have made just to get started. Some of those people earning under $100 per month could have potentially paid over $50,000 upfront.

Is Secret Society of Millionaires a Scam?

Well, it’s not a scam as such since it does push you through to an opportunity that’s technically legit, however, in my opinion, it’s extremely misleading & if you buy into it you’ll likely find yourself very disappointed.

Ultimately as far as I’m concerned the Secret Society of Millionaires system has been set up for one reason and one reason only, which is to make the creator wealthy at your expense. The person behind this program obviously doesn’t care about your success & he (or potentially she) is just set out to make themselves a quick buck.

As I say, yes you can make money with MOBE but it’s nowhere near as easy as these systems that are promoting it make it out to be. You’ll be required to work around the clock if you really want to pull it off & make it a success.

But to be honest in my opinion you should never have to spend such a crazy amount of money to get started online, especially not when there are step-by-step programs out there like Commission Academy which you can get started with for free.

So overall it’s safe to say I won’t be recommending the Secret Society of Millionaires program to you because I just don’t believe it will provide you with any real value & in my opinion it’s not the best place to get started.

Hopefully you found this review useful & hopefully it provided you with everything you wanted to know but if not & you still have some further questions or comments then don’t hesitate to leave them below.

2 thoughts on “Secret Society of Millionaires – Scam or Legit? My Review Uncovers Everything”