Smart Dollars Club claims to be the number 1 online prize rewards program & they promise to pay their members whopping amounts of cash in return for completing quick & easy surveys online. 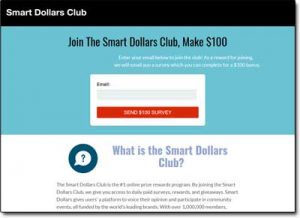 But is it actually legit or will Smart Dollars Club scam you instead?

That’s exactly what I wanted to know so I took a closer look into how it all works & in this review, I’ll be uncovering the truth about what’s going on & I’ll also determine whether or not you can really make any money with it.

What Is Smart Dollars Club?

Smart Dollars Club is a pretty new website & despite that, it surprisingly still claims to be the number 1 online prize rewards program. That would be a pretty amazing achievement for a website that’s only been online a mere couple of weeks.

Therefore naturally as you can imagine this bold promise of high income has gotten a lot of people interested in the website & I’ve seen it getting shared pretty heavily online… But don’t rush into signing up because it’s not what it seems!

The $100 per survey promise is just yet another lie and the truth is that there isn’t actually any surveys at all.

So what’s going on then? Well keep reading & I’ll show you exactly how it all really works…

How Does Smart Dollars Club Work?

That’s because in reality the whole thing has just been set up to make its creator rich rather than you, and he (or she) will be getting rich at your expense.

The reason I say he OR she is because the person behind it keeps themselves anonymous so there’s no way to tell who’s created it. Legitimate paid survey sites always display their company details or office address so that is something you should always look out for when you come across an opportunity like this.

Anyway, basically the Smart Dollars Club website pushes you towards entering your email addresses & in return, you’re promised that you’ll be provided with a survey that you can complete & earn $100.

This is just straight-up BS because like I said there are no surveys at all.

Instead, after entering your email address you just get added onto the creator’s email list. Then, shortly after you will receive an email which claims to contain a link to the so-called survey (as shown below). 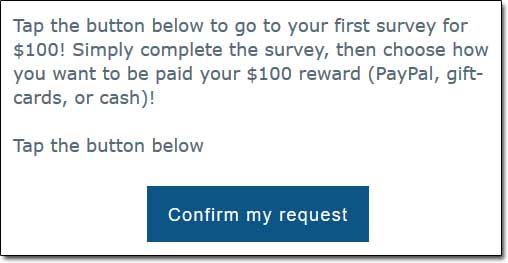 And if you have any antivirus software installed on your PC this is likely where you’ll find out there’s something suspicious going on because when you click the link to access the high-paying survey (which I don’t recommend) you’ll get a warning from your antivirus.

But if you don’t have protection, or if you get sent one of the newer links that the antivirus programs haven’t yet blacklisted then you’ll find that rather than taking you to a survey, the link actually takes you a random money-making website.

Some of the websites people have reported the link taking them to include American Consumer Eyes, the AZ Formula & the Ultimate PayDays system. The problem is that these are all known scams.

The Whole Thing Is a Trick

Like I previously mentioned in this review, there are no surveys at all – the whole Smart Dollars Club website is just a trick to get you to part with your email address. The creator has set it up to lure people in who are looking to make money & then after collecting your email he (or she) will try to push you into various scams.

Well basically the creator of the Smart Dollars Club is affiliated with them all & this means that if you sign up to them via the link that he uses to send you there then he’ll get paid a commission at your expense.

So as I say he (or she) is just set out to make money at your expense.

And that’s why they’ve made up an unrealistic figure of $100 per survey because they know that it will catch your eye. People will think “it’s probably not legit, but I’ll just enter my email anyway to check it out”…

But what they might not realize is that they will later get bombarded with emails from the creator of the Smart Dollars Club pushing them into scams.

It also has to be said that some of the scams, such as the Ultimate Paydays scam for example actually looks quite convincing… So even if you sussed out that the Smart Dollars Club was a scam it could be quite easy, especially if you’re new to making money online, to fall for something like that.

Is Smart Dollars Club a Scam?

Usually, I tip-toe around calling something a scam because I don’t like to be so harsh but in this instance, it’s clear for me to see that the Smart Dollars Club is indeed nothing but a big fat scam.

The whole thing has been built upon lies & its sole intention is to trick you into signing up with other online scams so that the creator can earn affiliate commissions at your expense. That’s why the creator(s) keep themselves hidden.

The truth is that you can actually make good money online but you are not going to be able to do it by carrying out such as an easy task as completing surveys. If you could then everybody would be doing it.

Making good money online requires work, just the same as if you were to make good money offline… The good news though is that if you are prepared to put in the work required to make it happen then there are legitimate programs out there like Commission Academy which will help you get started.

But anyway whatever you decide to do is entirely up to you – I just know that there’s no way I will be recommending the Smart Dollars Club program because it’s just total BS & should be avoided. Hopefully, you can see that now though after reading this review.

If you do happen to still have any additional questions or comments though that you feel I haven’t covered then don’t hesitate to leave them below & as always I’ll do my best to respond to you as quickly as possible.