The Smart Profit App by Robert Fisher has just launched (at smartprofitapp.com) and it promises to give you access to a so-called highly confidential & insanely profitable way to easily begin making tens of thousands of dollars per week online… 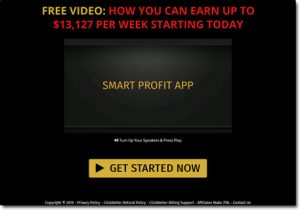 You’re led to believe that you can simply just sign up & begin making money, and what’s more the creator even claims to guarantee this… But is it really legit? Or will the Smart Profit App scam you & leave you red-faced instead?

Well thankfully you’ve landed in the right place to find out the definitive answer to that question as I myself have personally taken a closer look into it & in this honest review I’ll be uncovering the REAL truth about how it all works, as well as outlining whether or not you can really make any money with it. 🙂

What Is The Smart Profit App?

But I can tell you right from the off that’s complete BS, because not only is the website publicly accessible to everyone (meaning no invitations required) but it’s also a re-hashed version of a scam that I’ve already exposed several times before.

The person behind it (who isn’t really named Robert Fisher) has just changed the name of the scam in an attempt to escape the negative reviews so that he can continue parting more people with their hard earned cash.

And if you don’t believe me, check out my reviews of the Fast Cash App & the Smart Cash App – you’ll see that both of those systems are almost identical to the Smart Profit App, which is simply the latest version of the scam.

They’ve also both supposedly been created by “Robert Fisher” too…

So yeah, if you think you’re going to be able to make $13,127 per week through the Smart Profit App then think again because in reality the only thing this “app” will help you to do is LOSE money instead…

But I do appreciate that you’re probably not just willing to “take my word for it” when I say that – after all I understand that you might have been really hoping that the Smart Profit App was going to work for you… So instead keep on reading & I’ll show you exactly how it REALLY works below so that you can see for yourself why it won’t really make you any money.

How Does The Smart Profit App Work?

The website promoting the Smart Profit App basically wants you to believe that the whole thing is automated, so you’re essentially told that you can just sign up, hit a button & then begin generating thousands of dollars with ease…

But surprise surprise in order to access the system you’re firstly required to hand over some of your hard earned cash, and this is exactly where the scam lies. It’s just your typical get-rich-quick scam that promises the world, asks for your money & then fails to deliver once you’ve handed it over.

So after handing over your $37 to get started you’ll simply find out the hard way that there is no automated system after all, and you’ll also discover that the $37 was just the beginning of the costs to come.

Immediately after handing over the $37 you’ll then be hit with upsell after upsell which all promise faster, easier riches, but in reality they’re just ways for the creator to try & squeeze every last drop of cash out of you he can.

Then, when you finally get access to the members area after fighting through all of the upsells you’ll realize that what you’ve actually spent hundreds of dollars on is just some extremely basic affiliate marketing training.

Now don’t get me wrong here, affiliate marketing is great way to make money (and it’s the same way I personally make most of my own money online), but you can get legitimate training for free at Wealthy Affiliate.

And what’s worse is that even though the training at Smart Profit App costs hundreds of dollars, it’s still complete junk & it’ll be extremely unlikely to actually help you to begin making money. Instead you’ll just find yourself disappointed with your purchase, no doubt.

But What Actually Is Affiliate Marketing?

In short, affiliate marketing is where you basically connect people with the products that they’re looking for online & then get paid commissions in return… And I can tell you that it’s a pretty darn good way to make money.

It’s actually the same way that most of the celebs make their money nowadays too (as they use their social media platforms to promote products they’re affiliated with and get paid thousands in return).

But you don’t need to be a celeb to make money with it – I mean take me for example, I was just an average electrician until I discovered it, but it ended up completely changing my life.

And now newbies can even learn how to start with for free over at Wealthy Affiliate.

The process is pretty simple – as shown below you simply join an affiliate program, then you get a unique link to the products which you can share. If somebody happens to click on that link & then make a purchase, you get paid – often even if they end up purchasing a completely different altogether.

What’s more is that some of the product commissions can be hundreds of dollars (even thousands of dollars), so just 1 person purchasing something through your link could see a massive increase in your income.

The Problem With The Smart Profit App

Instead the Smart Profit App has just been setup to take advantage of you (and other affiliate marketing newbies) so that the creator of it can earn himself some money at your expense.

He just wants you to believe that his system (which is totally fake) can make you lots of money really quickly & easily but he’s just saying that to trick you into handing over your cash… Then he lets you discover the hard way that it’s not true.

And I can point out here that there is NO way (and never will be a way) to make lots of money quickly & easily… I mean think about if there was, then nobody would be left working a job… Everyone would just be making the easy money.

Is The Smart Profit App a Scam?

Well yes & no – I mean sure, you do get access to “some” training through the Smart Profit App which may lead you to not call it a scam, but ultimately it’s easy to see that it’s been purely set out to take advantage of you which in my opinion DOES make it a scam.

There is simply no way that if you sign up to the Smart Profit App you will make as much money as the creator claims & nor will you make any money fast or easily… Those are all lies to trick you into handing over your cash.

Instead you’ll likely just find yourself spending money & the true cost of the whole thing runs into hundreds of dollars… But like I mentioned earlier in this review you can actually get started at a legitimate place for free.

Or alternatively you can check out these other great ways to make money online.

But as far as I’m concerned there is no reason for you to sign up to the Smart Profit App system and I will certainly NOT be recommending it because I believe it to be nothing but bad news. Hopefully though you came here to this review first & managed to avoid it.

If you do still happen to have any further questions or comments about it though then don’t hesitate to leave them below & as always I’ll do my best to respond back to you as quickly as I can. 🙂