The Smart Cash App is a brand new ClickBank product that’s allegedly been put together by a man named Robert Fisher & it promises to provide you with an easy way to earn $1,595 per day through “one simple scheme” that supposedly exploits an error made by a $177 billion company. 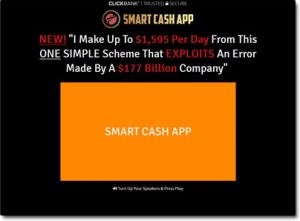 But no doubt with such a claim you’ll be extremely sceptical because whilst not only sounding “fishy”, it also sounds illegal…

So what’s the truth, can you really legitimately make any money at all with it, or is the Smart Cash App a scam that’s just set out to rob you instead –  like most of the other ClickBank products?

Thankfully you’ve landed in the right place to find out as I’ve personally taken a closer look into this system to see exactly how it works & in this honest review I’ll be uncovering everything you need to know so you can determine whether or not it’s really worth your while trying it out.

What Is The Smart Cash App?

But what’s created so much interest in this “app” is the fact that is claims that people can still make money with it even if they have absolutely no technical knowledge or previous experience of making money online.

However, I think you’ll agree with me when I say that sounds a little too good to be true… I mean sure, if the system was promising to help you a bit of “small change” each day like $1 or $2, then maybe it could be legit – but the Smart Cash App system is promising a whopping $1,595 per day which frankly is just insane.

And I’m sure you know what they say about stuff that sounds too good to be true – it usually is.

So it’s safe to say that I have my doubts about this system right from the off, even more so since it’s a ClickBank product because ClickBank is just totally renowned for hosting a whole bunch of scam products.

Just recently I reviewed a whole bunch of other ClickBank products like the Million Dollar Replicator, The China Secret, the Money Looper & they ALL turned out to be flat-out scams. What’s more, they ALL share surprising resemblances to that of the Smart Cash App.

Is it possible that all of these systems could actually be interlinked? They have similar sales pages, make similar claims & have all been launched around the exact same time (within just a couple of weeks of each other).

How Does The Smart Cash App Work?

Well Robert, the guy who’s allegedly created the whole thing basically claims that he’s going to show you an amazing new trick to make money online before anybody else – but the bad news (as you’ve probably already found out) is that aside from that he doesn’t really say much else!

Well, he doesn’t say much else about how it all actually works anyway… Instead, he just rambles on in the promotional video about how easy it’s allegedly going to be & how much money you can make, which is another common trait of a scam…

Thankfully though after taking a closer look into it I managed to find out exactly how it all works and I can tell you with 100% confidence that the whole thing has been built upon complete utter BS.

There is NO way you will find yourself making $1,000+ per day with the Smart Cash App system – in fact you’d be lucky to earn so much as a single dollar with it because it hasn’t really been designed to help you make money at all.

You see the Smart Cash App is yet another system that’s been built around the method of affiliate marketing, which is where you promote products for 3rd party companies online & earn commissions on the sales.

Now the important point here is that affiliate marketing in itself IS legit, but you need proper training to find success with it (which you can get for free over at Wealthy Affiliate).

The problem is that the training provided via the Smart Cash App program is VERY basic. It is literally the bare minimum & it just essentially touches on how affiliate marketing works… It doesn’t really show you how to do it.

So you’ll spend $37 & get access to the program only to find yourself “stuck” because you don’t get enough information. So what happens next? Well, Robert has a whole bunch more upsells lined up…

He hypes you up & claims that you can make money from it – you just need his “advanced” training which costs more money – but once again the same story occurs… If you purchase this you’ll just be left to discover again the hard way that you’ve been lied too.

The creator of the Smart Cash App is literally just interested in taking money FROM you, that’s all. He or she (whoever is really behind it) doesn’t really care about your success whatsoever.

And the reason I say “whoever is really behind it” is because as far as I’m concerned Robert Fisher is just a pen name. There’s no proof whatsoever that he exists, and therefore I believe the creators have just made the name up.

As I mentioned above there are several upsells on the inside of the Smart Cash App system, but you might be shocked to see just how expensive the upsells actually are…

And this also proves something else – it proves the whole thing is totally fake.

How does it prove that?

Well, stop and think about this for a minute. Robert Fisher claims the Smart Cash App can make you thousands of dollars per day on autopilot, and if that were true then 1, why would the creator need (or want) to pay affiliates to promote it? And 2, why would affiliates waste their time trying to promote it when they could just sign up to make money on autopilot instead?

Is The Smart Cash App a Scam?

Without a doubt, the Smart Cash App is a scam. I mean don’t get me wrong I know there will be some people out there who’ll argue with me on that by saying “but you do actually get access to some training” and yes, you do – but the sales claims are 100% misleading.

There is NO way you’ll find yourself earning thousands of dollars per day with the Smart Cash App & none of the process is as easy as the creator wants you to believe it is. It’s just a con.

Like I mentioned earlier in this review the truth is that it’s just been set up to make the creator wealthy at your expense as opposed to actually being set up to help you make money like it claims it has.

So for those reasons I highly recommend you avoid the Smart Cash App program & instead if you really want to legitimately make money online I suggest you check out my top-ranked program by clicking here (which is free).

Or alternatively, you can check out my top picks page here which contains a whole bunch of different legitimate ways to make money.

Whatever you decide to do though I just hope that my review has given you a good insight into how the Smart Cash App really works & I hope it helped to prevent you from parting with your hard-earned cash. If you do happen to have any further questions or comments then don’t hesitate to leave them below & I’ll get back to you as quickly as I can.