Social Bounty is a website that claims to connect social media users with advertisers & provide them with a way to earn money by posting links to their followers. 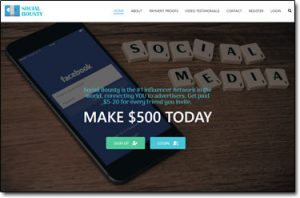 They call themselves an “influencer network” and they boast that you’ll be able to easily earn as much as $500 per day using their service.

But can you really? Or is Social Bounty a scam that you should just avoid?

Well put it this way, you’ll definitely be glad that you came here to this Social Bounty review before you signed up as I can immediately tell you that the whole thing is not what it seems & that the website doesn’t even actually pay.

What Exactly Is Social Bounty?

But what exactly is an influencer network?

Well, Social Bounty defines itself as a site that essentially connects social media users looking to make money with advertisers that are looking to promote their products & are willing to pay people to do so.

According to the people behind Social Bounty, all you need to do to earn money is sign up, share a link & refer other people to join just like you did. You’re told that you’ll be paid between $5 & $20 for every person that you invite.

And what’s more, all they allegedly need to do is create a free account…

So you create a free account, share your link, get others to create free accounts, and you get paid – allegedly.

But there’s one thing you’ve got to stop & question, which is where is the money coming from?

How can they afford to pay people $5 to $20 per referral?

Well, in short, the answer is they can’t, and they’re not. You see the truth is that Social Bounty is actually a fake website that’s been set up to trick you & none of the members who join will ever actually get paid.

The reason I can say that so confidently is because I’ve actually already exposed this exact same scam several times before right here on this blog. I’ve previously seen it launched under various different names such as:

The people that are behind it simply keep on changing its name & appearance a little bit in an attempt to escape the reviews which surface that expose the truth about it so that they can continue tricking more people into signing up to it.

But how exactly does it work, and why are the creators tricking people into signing up to it?

And more importantly, what should you do if you’ve already signed up to it?

How Does Social Bounty Work?

So basically as I discussed in the previous section, Social Bounty is supposed to connect you with advertisers that are looking to pay you money – or at least that’s what it claims it’ll do anyway.

The problem is it doesn’t because it’s actually nothing more than a viral data-harvesting scam.

You see the people behind Social Bounty are basically working on the premise that the majority of people sign up to every website they visit using the exact same credentials (same username, email, password etc)…

So they’re essentially hoping that you sign up to their Social Bounty website using these same details too as essentially their goal is to attempt to compromise your online accounts & use them for illicit purposes.

This means that after signing up to Social Bounty (which I don’t recommend doing if you haven’t already) the people behind it will begin trying to find any accounts they can that are associated with your details.

And then they’ll attempt to use the details that you used to sign up to Social Bounty with to break into them. If they’re successful, they’ll then likely use them to somehow scam you out of your hard-earned cash through one way or another.

And even if they’re unsuccessful you still won’t be quite in the clear as they’ll then just sell your data onto shady third-party marketing companies instead.

So if you’ve already signed up to Social Bounty prior to reading this review & you did so using the same details that you use elsewhere then I’d strongly urge you to go & change those details ASAP.

As an example, if you signed up using the same details that you use to login to Facebook then you should head to Facebook & change your password as soon as possible to prevent the people behind Social Bounty gaining access to your account.

One of the reasons so many people have been getting caught out by sites like Social Bounty lately is because the sites have been set up in a way to lead people towards believing that they’re actually earning money when they’re not.

You see if you sign up to Social Bounty & refer others (which of course I don’t recommend doing) then you’ll find your account balance appears to increase accordingly which each referral that you make.

This can make you think that it’s actually working, or that it “might” be working & encourage you to keep going… However, when you attempt to make a withdrawal you’ll be left to discover that you never actually get paid.

The “money” you’ve earned isn’t real, it’s just faked numbers & that’s why the minimum withdrawal limit has been set so ridiculously high. They want to force you to refer as many people as you can before you’re able to discover that it’s actually just a scam.

Here’s The Proof It’s a Scam…

Well to start with there’s the fact that Social Bounty claims to be the “#1 influencer network in the world” and boasts the following statistics:

However a quick search on the domain name’s age (socialbounty.co) reveals that the website has actually only been active for a mere 22 days as shown below:

On top of that though the Social Bounty website also displays a phone number & an address in an attempt to make the company seem legitimate, but a quick Google search as shown below reveals that it’s not:

There’s no way a legitimate “influencer network” would go the lengths of adding a fake phone number & address on their website. That alone highlights how the website is clearly up to no good.

So Why Are People Saying It Works?

You might have seen some people on social media claiming that Social Bounty really works & that the site does actually pay, and after now reading this review you might be wondering what the deal is with those…

Well put simply, the good things being said about Social Bounty are all being said via compromised accounts.

The people behind Social Bounty have compromised the social media accounts of users that have signed up & they’ve been using their accounts to spread the word about Social Bounty without the account owners knowing.

So basically the “good things” said about Social Bounty are all lies. The site hands-down doesn’t work & doesn’t work.

My Verdict – Is Social Bounty a Scam?

I can tell you with 100% certainty that Social Bounty is a scam, the evidence is absolutely overwhelming & like I mentioned towards the beginning of this review I’ve actually already exposed this same scam before under various different names.

Some of its past names include EarnBucks, Click2Cash, Rain Money & Use2Earn.

The Social Bounty is set out to do nothing other than stealing your data in an attempt to compromise your online accounts & no matter how many people you refer or how much you “earn”, you’ll never actually get paid.

It’s just a total waste of time, as well as a scam…

But there is some good news which is that even though Social Bounty itself is a scam, there are indeed still other legitimate ways that you can earn money online & you can check out the best ones on my top picks page right here.

And I’ll also point out here one of my all-time favourite methods for making money online which is a method called affiliate marketing (and it’s the same method that I personally use myself to make most of my own money).

Affiliate marketing basically involves you promoting third-party products or services (such as products from Amazon) in return for commissions & the great thing is that there’s no limit on the amount you can earn.

And you can get started with it or learn more about it for free at Wealthy Affiliate, so if you’re interested in it then I’d highly recommend you at least check out that platform before you leave.

But whatever you decide to do I just sincerely hope that my honest review of Social Bounty here has helped you see how it really works & most importantly I hope it’s helped to protect you from it.