Today I came across an interesting new money-making system named 3 Step Method which appeared to provide its visitors with an allegedly trademarked way for them to begin generating an automatic income online in just 3 simple steps. 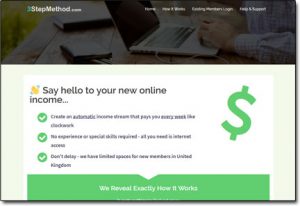 Could you really generate an automatic income online so easily & if you can then why isn’t everybody doing it?

Or is the 3 Step Method a scam that’s actually just set out to take your cash?

Well, you’ll be glad that you decided to come to this 3 Step Method review signing up because I can tell you right from the off that the 3 Step System is NOT what it seems and that it doesn’t really live up to its claims.

What Is 3 Step Method?

The 3 Step Method system claims to provide you with a trademarked way to easily begin generating an automatic income of over $10k per month online by following just 3 simple steps.

You’re told that you don’t need any experience or technical skills & that all you need is internet access. If you have that then you’re told you’ll be able to get immediate access to an “automatic income stream that pays you every week like clockwork”…

But if that’s true then why isn’t everybody doing this? Why are people still working at jobs they dislike for less money if they can simply just sign up to the 3 Step Method & generate an automatic income of $10k/month?

There’s got to be a catch right? It sounds WAY too good to be true…

And surprise surprise yes there is a catch. I mean sure, it is indeed possible to make $10k/month online through OTHER methods however the whole 3 Step Method system is just a con that’s trying to trick you out of your cash.

Legitimate programs like Commission Academy, for example, tell you everything you need to know beforehand & even give you access to the program for free to try it out… They don’t hold back information & force you to hand over money like the 3 Step Method scam does.

But I know what you’re probably thinking, how does the scam actually work? And what do you actually get if you DO hand over your money? Well, keep on reading because that’s exactly what I’m going to cover next…

How Does 3 Step Method Work?

Well, in all honesty, the trick is actually very simple. The creators of the 3 Step Method have basically just overhyped how easy it will be to make money using their method & then trick people into handing over their cash to “find out more”…

Sadly though when people do hand over their cash (which many have already done) they’re just left to find out the hard way that the whole thing isn’t actually anywhere near as it was made out to be.

You see the creators of the 3 Step System have basically piggybacked off something called affiliate marketing, which is actually a legit method for making money & the same way I make most of my own money online.

The problem though is that whilst affiliate marketing is a VERY good way to make money, you must put in work to make money with it, and you will likely need the help of proper training (like that found at Commission Academy) to truly see success.

Sadly though the 3 Step Method only gives you access to some extremely basic training & they also make out like you won’t need to do any work whatsoever which is a complete lie. What they don’t tell you though is that their 3 steps are HUGE steps…

Their 3 steps will likely include the following:

That way they can say that their system is legitimate because there is indeed 3 steps… But obviously, if you are new to affiliate marketing & you read those steps then they are not really going to help you at all.

Like I say if you truly want to see success with affiliate marketing you need the help of a high quality & proven training program like Commission Academy – and you must also be prepared to put in work to make it happen.

I mean yes the internet is great & it does indeed provide many ways for you to make money however it’s not magical & it is therefore not going to see you earning a substantial “automatic income”. It never will, it’s simply not possible & anything promising that is likely just trying to scam you.

But alongside those points, there’s also the fact that the website gives away NO information whatsoever as to who’s actually behind the whole thing. No names, address, information or anything…

That would mean that if you DID hand over your money to try out the 3 Step Method system then it would basically be like handing over money to a random stranger in the street who you may never see again. It’s a huge risk.

Thankfully though I was able to discover that the product is actually being sold through a third-party merchant named ClickBank which means that if you have already handed over your cash you may stand a chance of getting your money back by contacting ClickBank directly.

ClickBank is renowned for providing merchant services to many scams or low-quality programs however generally if contacted directly they are said to be good at honouring refunds provided they’re requested within 60 days of the transaction date.

I recently reviewed a bunch of other ClickBank programs such as ClickBank Superstar, MoolaVine, Commission Hero & honestly overall I found it difficult to actually recommend any of them. As a result, I’m now always wary whenever I see that a program is associated with ClickBank…

Also to further prove it’s a scam, the person you’re told that’s the “creator” in the 3 Step Method video is actually just a paid actor that’s been hired from the website Fiverr as shown in the image below:

But anyway I think I’ve said enough about this program, you probably get the idea already so I think it’s time for…

Is 3 Step Method a Scam?

Well, the creators of the 3 Step Method system will no doubt argue their case and say that the system isn’t a scam because there “really is 3 steps inside that could potentially make you money”, however, in my opinion, it IS a scam because it’s unlikely that anybody will actually make money.

In reality, it’s quite clear that the creators of it have created the 3 Step Method system as a ploy to simply get you to hand over your cash so that they can earn themselves some money at your expense. They’re not really set out to help you at all.

For that reason it’s safe to say that I will NOT be recommending the 3 Step Method scam to you & instead if you truly want to make good money online I suggest you just join a legitimate & proven platform like Commission Academy instead.

It’s at Commission Academy that you’ll really get access to the tools & training you need & you can even get started with their program for free so that you can try it first-hand for yourself to see exactly how it works.

Or alternatively, there are also these other great ways to make money as well.

But whatever you decide to do I just sincerely hope that my honest review of the 3 Step Method scam here has given you a good insight into how it really works & hopefully you can now see why it isn’t worth joining. Feel free to leave any further questions or comments below. 🙂