The newly launched Ad Flippers Bot system claims to provide you with “the easiest way to make money online” as it supposedly enables you to take advantage of a secret money-making method. 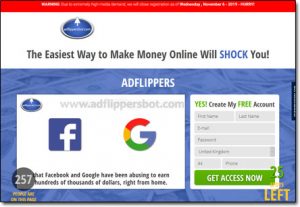 You’re led to believe that you’ll be taking advantage of the exact same method that Facebook & Google have allegedly “been abusing” to earn hundreds of thousands of dollars & that you can even get access to it for free.

But is it actually legit? Or is the Ad Flippers Bot a scam that’ll just ultimately somehow see you losing money rather than actually making it?

Well, I’m glad that you came here to my Ad Flippers Bot review before signing up to it because I can immediately tell you right from the off that the whole thing is a LOT different than what it claims.

What Is The Ad Flippers Bot?

The Ad Flippers Bot is a newly launched system which promises to provide you with access to the exact same method that the likes of Facebook & Google have allegedly been “abusing” to make their money.

You’re told that it’s the “easiest way to make money online” and as shown below the video on the Ad Flippers Bot website calls it a “surprisingly simple strategy to earn $20,000 per month”:

But there’s one big problem, which is the fact that it all sounds WAY too good to be true. I mean if the Ad Flippers Bot is legit & has truly been featured in the news then why on earth isn’t everybody using it?

Why are people still working at jobs they dislike if they could simply sign up to the Ad Flippers Bot system for free & earn as much as $20,000 per month from their home without actually having to do anything?

Well, the answer is because the Ad Flippers Bot is NOT legit – it’s actually just based around something known as the ad flipping scam.

And I can say that so confidently because I’ve actually already seen this exact same system several times before because it’s been launched under various different names such as Online Empire, Adflippers & the AD Code.

The scammers behind it just keep on changing the name of the system in an attempt to escape the negative reviews that surface outing the truth (like mine here) so that they can trick more people into signing up to it.

But how does it work? How does it scam you? And can you make any money with it?

How Does The Ad Flippers Bot Work?

So, in short, the Ad Flippers Bot system basically attempts to lead you towards believing that you’re going to be getting access to some sort of really easy way to take a cut of the profits from online advertising… But that’s not true.

The truth is that the whole thing is just known as an ad flipping scam.

The creators of the Ad Flippers Bot want you to believe that you’ll be able to invest in online advertising & that in doing so it will enable you to take a cut of the profits each time the adverts are clicked on.

They call it “ad flipping” – but it’s all complete utter nonsense.

I can say that with 100% certainty because I’ve been doing online marketing for many years now & there’s simply no such thing – there’s absolutely no way it could ever work & it’s just a fake ploy they’ve come up with to part you with your cash.

The truth is that the Ad Flippers Bot is just a front, and if you decide to “try the bot” you’ll simply be redirected through to another website such as Click2Sell or BannerBit – which they claim are online marketplaces for investing in advertising.

At those websites, you’ll then be shown various banner ads & you’ll be able to pick which ones you want to invest in… You’ll also be told what sort of return to expect from the clicks & how much you could get by selling it later down the line.

The problem though is that it’s all fake – the marketplace is not real… You’re not really investing in anything. The whole thing is just a con so that the people behind it can earn at your expense.

It’s quite clear that the creators of this scam have gone to great lengths to try to convince people that it might actually be legit, such as by creating a marketplace & by making your account balance increase to make it seem like you’re generating profits…

But regardless it’s still a scam, just an elaborate one.

Unfortunately, though they appear to be very good at making people just “try it out”, and as a result most of the people who fall victim to scams like the Ad Flippers Bot scam later say that they actually thought it might have been a scam, but just wanted to test it…

So I urge you not to “test it” because it’s not real.

It doesn’t matter they tell you on the phone when they call you up or what other reviews say (because there are some false positives out there) – the Ad Flippers Bot system 100% doesn’t work as promised.

I mean think about it – like I said at the start of this review if it really worked as promised then nobody would be left working a job… Everybody would just be using the Ad Flippers Bot system to earn & the world would be in crisis.

Yes, the internet is great & it provides many legitimate ways to make money but it’s not magical & none of those ways will ever see you making lots of money with little to no work… That’s just a pipe dream.

Plus there’s the fact that the Ad Flippers Bot system claims to have been featured on CNN Money & BBC News as shown below:

But it hasn’t… That’s just another lie. I searched both of those websites for the Ad Flippers Bot & didn’t find any mention of it whatsoever. It’s just another trick to try to make you believe it’s legit when it’s not.

Is The Ad Flippers Bot a Scam?

The evidence is overwhelming – the Ad Flippers Bot is definitely a scam, and like I said earlier in this review I’ve already seen it launched before under several different names such as Online Empire & the AD Code.

The truth is that the whole “ad flipping” thing doesn’t exist – it’s just a made-up concept that the creators have come up with in order to trick you into depositing money via their system so that they can earn at your expense.

So it comes without saying that I won’t be recommending the Ad Flippers Bot & instead, I’ll be advising that you steer clear of it.

Alternatively, you could also learn about the same method that I personally use to make most of my own money online which is called affiliate marketing. In my opinion, that’s one of the best ways to make good money online.

The best part is that the amount you can earn with it is totally uncapped & it’s also great for beginners. If you’re interested in finding out more about it or getting started with it then definitely be sure to check out Commission Academy.

But whatever you decide to do I just hope that my review of the Ad Flippers Bot here has given you a good insight into how it really works & I hope that it has helped prevent you from losing money to it.