CloutOG calls itself the #1 influencer network in the world & promises to provide people with an easy way to earn up to $500 per day online. 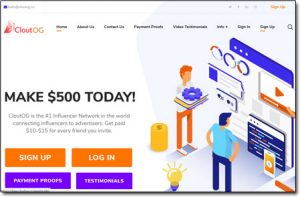 According to them, all you need to do is simply sign up & then refer other people.

They claim that they’ll pay you between $10 & $15 for every friend that you manage to get to create an account, which I think you’ll agree is a pretty substantial amount of cash for such a seemingly easy task.

Especially since people can create their accounts for free…

So what’s the catch? Is CloutOG a scam?

Or is it actually a legit site that you can earn real money from?

Unfortunately, I can tell you right at the start of this review that CloutOG isn’t legit, and that it is indeed a scam. You’ll see why in this review of CloutOG & I’ll also share the legitimate alternatives that you can use instead.

Sound good? Keep reading for everything you need to know…

CloutOG is a website that’s just recently launched claiming to be the #1 influencer network in the world & promising to provide people with a really easy way to earn lots of money online.

The concept is simple, you create a free account – then (allegedly) get paid for referring others who do the same.

And CloutOG claim that they’ll pay pretty large commissions of $10 to $15 per member referred.

But there’s one big problem…

If people are signing up to CloutOG for free & then just referring other people who are also creating free accounts, then how on earth can CloutOG afford to pay people such large commissions?

How are they making their money?

Well in their FAQ they state the following:

However, I can tell you with 100% certainty that none of that’s true.

The reason I can say that so confidently is because the CloutOG scam is a scam that I’ve already exposed here on this site several times already.

The people behind it simply keep on launching it under different names in an attempt to escape the negative reviews that expose the truth about it so that they can continue tricking people into signing up to it.

Some of its previous names include Tap2Cash, Influencer Cash, Social Bounty & Use2Earn.

A quick check of my reviews of those programs will enable you to see that the websites are all pretty much identical, and the claims made by each of them are all the same too.

Funnily enough, they all claim to be the “#1 influencer network in the world”…

I know what you’re probably thinking now though – how does it really work? And if it’s free, then how does it scam you?

In short, CloutOG is none other than a data-harvesting scam & the whole opportunity of making money is completely fake.

This means that basically, the people behind CloutOG are just interested in collecting data from as many people as they possibly can & they’ve created the fake seemingly-lucrative opportunity to trick people into signing up.

Then of course once signed up, they’ll share it to see if it actually works.

But here’s the deal – none of the people that join CloutOG will ever find themselves actually getting paid.

Instead, they’ll just be putting their online accounts at risk of being compromised – because the people behind CloutOG are working on the concept on that most people use the same username/email/passwords for every website that they visit.

And it’s true, most people do.

So when you sign up to CloutOG (which I don’t recommend doing), the people behind it will then begin attempting to find any other accounts that are associated with your credentials.

And even if they’re unsuccessful at actually compromising your accounts, they’ll likely still sell your data onto third-party marketing companies in return for a handsome profit.

So you’ll either get scammed, or spammed… Not good.

If you’ve actually tried CloutOG prior to coming to this review then one thing you might have noticed is that your account balance does actually appear to increase accordingly with each new person that you refer.

Basically, it appears to be real – and it makes it seem like you’re actually earning.

Unfortunately, though, it’s not real & this is just a trick that the people behind CloutOG have deployed to try to encourage you to keep on sharing the site so that they can get as many people signing up as possible.

The worst part is that you’d only get to find out the hard way that the money isn’t real when you finally come to make a withdrawal request, and that’s why they’ve set their withdrawal limit so ridiculously high.

Don’t get caught out by it.

The Other CloutOG Tricks Uncovered

Firstly, there’s the fact that on the CloutOG “About” page the people behind the whole thing state that the company was founded back in 2015 – but that’s a complete lie, as shown below:

A quick search on the domain name (cloutog.co) revealed that the name was actually only registered in January 2020, which is 5 years later than they claim to have launched.

And that also means that at the time of writing this review the site is only 2 months old, meaning there’s absolutely no chance it could really be the “#1 influencer network in the world” like they claim either.

That’s not the only red-flag though…

The other red-flag lies with the testimonials because upon running a reverse image search on one of the testimonial images using Google I found that the same image was linked with several other sites as shown below: 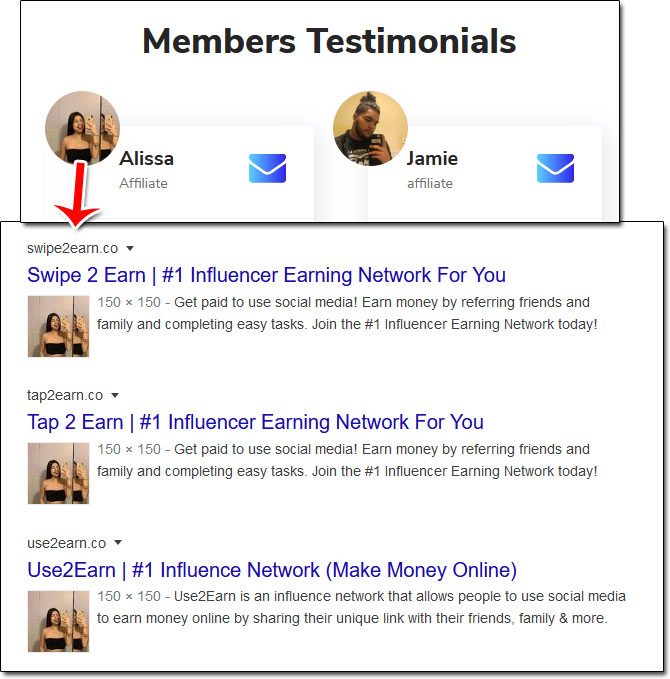 As you can see from the screenshot above the same testimonial is associated with the following websites:

And as you can also see, all 3 of those websites also claim to be the “#1 influencer network” too…

The reason? Because they’re all operated by the same group of people. Like I mentioned at the beginning of this review, the people behind this scam just keep relaunching under different names.

Is CloutOG a Scam? Final Thoughts

The answer to that question is yes, CloutOG is definitely a scam & it’s definitely a website that you should avoid as it’ll do nothing other than waste your time & potentially put your accounts at risk of being compromised.

But what if you’ve already signed up? What can you do to protect yourself?

Well basically you’ll only be at risk if you’ve signed up to CloutOG using the same password that you use elsewhere, and the way to protect yourself is by changing that password as soon as possible.

And what if you’re still looking to make money? What else can you do?

One of my favourite methods is something called affiliate marketing & it’s the same way that I myself personally make most of my own money online.

It basically involves you promoting products or services for companies online & getting paid commissions in return – but the benefit is that there’s no limit on the amount you can earn.

The harder you work, the more you stand to earn… So if that interests you then I’d highly recommend you check out Commission Academy before you leave which is where you’ll learn exactly how you can get started with it. 🙂

Or you can also check out my other top picks right here.

Whatever you decide to do though I just sincerely hope that my honest review of CloutOG here has given you a good insight into how it really works & helped you see why it’s best avoided.

Feel free to leave any comments or questions below. 🙂