The Computer Technical Guys program claims to be the #1 choice for success online & you’re led to believe that it can help you to begin easily generating a full-time income online from the comfort of your very own home… Even if you’ve never made so much as a single penny online before. 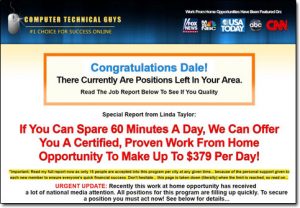 The creator, Linda Taylor states that you can even begin making money the very same day you get started… But you might think it sounds a bit too good to be true, so what’s the deal?

Is it actually legit or is Computer Technical Guys a scam that’ll just end up seeing you spending money rather than actually making it?

Thankfully you’ve landed in the right place to find out because I’ve taken a closer look into this program to see what it’s all about & in this review, I’m going to be uncovering everything you need to know including how it all really works & whether or not you can make any money with it like Linda claims you can.

What Is Computer Technical Guys?

Computer Technical Guys is a make-money-online program that’s allegedly been put together by a lady named Linda Taylor & it claims to teach you how you can begin making money by simply posting links.

Linda makes it all seem really easy & based on the information she gives you it kinda seems like the dream opportunity – after all who wouldn’t want to make a ton of cash just by spending a few minutes each day posting links online?

Sadly though in reality, it’s not quite as simple as that, and right from the off, I can confirm that the Computer Technical Guys program is indeed a bogus program & that Linda Taylor (the person that’s supposedly created it) isn’t real either.

The reason I can be so confident about that right from the off is that I’ve seen this exact same program several times before. I’ve actually exposed here on this blog under many different names such as The Computer Geeks, Online Jobs Now & Simple Income Strategies.

If you check out those reviews where I’ve previously exposed it you’ll see that the website is identical, literally, the only thing that changes is the name & the reason the real creator keeps changing that is to try & escape the negative reviews so that he (or she) can continue scamming people of their hard-earned cash.

And whilst on the topic of the creator, Linda Taylor who you’re led to believe has created the program doesn’t really exist. The name is just an alias that’s being used to hide the true creator’s identity (which remains unknown). I know that because previously this scam was being launched under the name Cynthia Sprinter & now it’s just suddenly changed to Linda Taylor (likely because many people – such as myself exposed Cynthia).

Anyway, I know you were probably hoping that this program would actually be real & that you might not be willing to just take my word for it when I say it’s a scam so instead let me show you how it all really works so that you can see for yourself what’s actually going on…

How Does Computer Technical Guys Work?

Right from the off the Computer Technical Guys program makes you think that you’ll be getting access to some sort of “link posting job” through which you’ll be paid directly for every link you post, but in reality that’s not the case.

But anyway yeah, basically the Computer Technical Guys is just a program that’s looking to take advantage of people that are new to affiliate marketing or new to making money online in general.

They promise to provide you with an easy way to make money but in reality, all they’re providing you with is hype & their real intention is just to get as much cash from you as possible. Like I say the $97 fee is just the beginning – after paying that & getting “initial access” to the program you’ll then receive phone-calls encouraging you to spend hundreds more (and potentially even thousands).

However, after spending all the money (which I absolutely don’t recommend you do) you’ll just be left to find out the hard way that you were lied to & that everything they promised you isn’t really going to happen.

Is Computer Technical Guys a Scam?

The answer to that, in my opinion, is yes it is. I’ve seen this exact same program launched under several different names & all of those websites have received dozens of negative reports.

On top of that I also previously spent $97 of my own money on this program to check it out first hand & I found out just how rubbish it was… I couldn’t believe my eyes. If you want to find out more about what I found inside after buying into it then be sure to check out my Online Jobs Now review (it’s the same program when it was launched under a different name).

As far as I’m concerned it’s purely set out to make the creator wealthy at the member’s expense… It’s not really set out to help anybody make money like it claims to be so for that reason I won’t be recommending it.

Instead, I’ll actually be advising that you avoid it because, in my opinion, it’s nothing but bad news. Like I said earlier in this review if you really want to make money online then you should check out a legitimate program like Commission Academy which you can actually get started with for free… And that’s a program that will give you the proper training you need to actually begin making money (unlike the Computer Technical Guys).

So yeah just to reaffirm that overall I won’t be recommending this program & hopefully, this review gave you a good insight so that you can see why I have come to that decision. If you do happen to have any further questions or comments though then don’t hesitate to leave them below & as always I’ll do my best to get back to you as quickly as possible.