Money Guru (located at MoneyGuru.co) is a website that promises to pay you money in return for simply installing apps & referring friends. 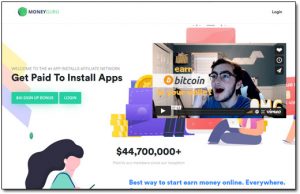 At a glance, it sounds like a dream – especially since Money Guru promises that you’ll be able to easily earn as much as $100+ per day right from the very same day that you get started.

Or is Money Guru just a scam that you should avoid?

Well, I can tell you right from the off that Money Guru is (unfortunately) a scam… But if you continue reading this Money Guru review then not only will I show you how it all really works, but I’ll also explain what you can do to legitimately make money instead.

What Is Money Guru?

Money Guru boasts that it’s the “#1 app installs affiliate network” & it promises to provide you with an opportunity to earn easy money online by simply downloading & installing apps to your phone.

Plus, alongside that, they also claim that you can make extra money by referring others & they even offer a whopping $10 sign-up bonus to try to lure you into creating an account.

But Money Guru is not what really what it tells you.

Instead of being a legitimate get-paid-to website (a website that pays you for completing tasks), Money Guru is actually a dangerous type of scam known as a data-harvesting scam.

This means that if you do sign up to Money Guru, then on top of wasting your time & not getting paid, you could also find yourself getting scammed.

And I can tell you that so confidently because I’ve actually seen this scam several times before.

Prior to being named Money Guru, it’s been launched under several different names such as:

Basically, the people behind it keep on launching the scam & then changing its name when it gets exposed so that they can continue tricking unsuspecting victims into joining.

But I know what you’re probably now wondering…

How exactly does it work? And how can you protect yourself if you’ve already signed up?

The good news is that’s what I’m going to cover next.

How Does Money Guru Work?

In short, Money Guru does not work as promised. The website does not really pay its members & the entire thing has been set up in an attempt to trick people into parting with their data.

That’s why it’s known as a data-harvesting scam. They want to collect as much data as they possibly can from people so that they can then attempt to break into their other online accounts.

And what easier way to do this than to create a fake opportunity to earn money?

Visitors to Money Guru think that they’re going to be able to earn cash, so they go right ahead & sign up. Then, to begin “earning money”, they start referring others as instructed by Money Guru.

Their account balance increases, so it appears to be working, and naturally, they begin referring more people to reach the withdrawal limit.

But Money Guru has no intention of paying anybody. It’s all a con.

None of the members who are promoting Money Guru are really earning money by referring people. All they’re really doing is luring other people into the scam, without knowing it.

Then, why those members finally reach their withdrawal limit & request a withdrawal, they’ll just be left to find out that it’s all been a waste of time as their request will never get processed.

Money Guru will either ignore it completely, or they will reject the withdrawal & claim that they rejected it because of “click fraud”.

But whilst discovering that your time has been wasted certainly isn’t fun, that’s not even the worst part.

The worst part is the fact that the people behind Money Guru could also go on to steal money from you as well by breaking into any other accounts they can find associated with your details.

You see, the people behind Money Guru are simply hoping that you (and others) sign up to their website using the same username/email/password combinations that you use at other websites.

If you do, then that means they could compromise your accounts… And you best believe that they’ll certainly try.

Protecting Yourself From Getting Scammed

If you signed up to Money Guru using a different password to the one that you use on other websites then you should be pretty safe. Other than sending you spam, there’s not a great deal that Money Guru can do.

But if you signed up to Money Guru using the same details that you use at other websites, then you could find your other online accounts being compromised until you change your passwords ASAP.

So, as an example, if you signed up to Money Guru using the same email/password combination that you use to Facebook, then you should head to Facebook & change your password ASAP.

And also, as a pointer, you should never use the same password on multiple websites. Instead, you should leverage a password manager tool so that you can create strong, unique passwords for each website that you visit.

You should also always do due diligence & look for online reviews before signing up to sites like Money Guru, too. It’s never a good idea to dive head-first into something, especially if it seems too good to be true.

And just in case you’re still considering “trying” Money Guru despite what I’ve mentioned in my own review here, let me bring to light some of the red flags to prove that it’s a scam.

Well, firstly there’s the fact that Money Guru promises a suspiciously large amount of cash for such a simple task. If you could really earn so much money just by installing apps, everybody would be doing it – nobody would be left working a job.

The reality is that there are some websites that pay people money for installing things, but generally, they pay very small amounts – and it can also be very risky as the apps could contain spyware.

But alongside that, there are also other red flags, such as the fact that Money Guru claims to be the “‘#1 app installs affiliate network”, despite being just 6 months old (as shown below):

And whilst they do display a contact address, which is usually a good sign, a quick search on the address reveals that they’ve simply stolen the address of a legitimate company named “The Next Web”.

So it’s quite clear to see that there are a lot of red flags surrounding Money Guru & as I also mentioned towards the beginning of this review, the scam has already been seen under several different names.

Some of those names include Tap2Cash, Influencer Cash, Use2Earn & Social Bounty.

Is Money Guru a Scam?

Yes, Money Guru is definitely a scam & it’s a dangerous one, too.

None of the members that join Money Guru will find themselves actually getting paid. Instead, they will just be putting themselves at risk by signing up & handing over their data.

You see, Money Guru’s real intention is simply to try & harvest as much data as possible. It’s a data-harvesting scam & the people behind it are just trying to break into online accounts.

They’re basically just hoping that you sign up to Money Guru using the same details (username/email/password) that you use on other websites & they’re using the promise of money to trick you into joining.

What’s worse, however, is the fact that they’re also tricking people into unknowingly luring others into the scam by promising that they’ll earn money for referring people.

So people are sharing Money Guru with their friends & family under the assumption that it’s a legitimate money-making opportunity, but in reality, they’re just luring those people into a scam.

But there is a bit of good news & that is the fact that whilst Money Guru is not legit, there are alternative (and legitimate) ways that you can actually begin earning money online.

You can check them out on my top picks page here.

But whatever you decide to do, I just hope that my Money Guru review here has helped you to either avoid the scam or learn how you can protect yourself if you’ve already signed up.

Feel free to leave any questions or comments below.