My Home Success Plan is a relatively new website & it promises to provide its members with an “amazing” opportunity through which they’ll allegedly be able to earn as much as $500 per day by posting links online. 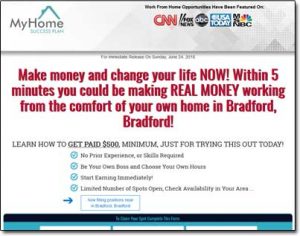 But I think you’ll agree with me when I say that that’s a pretty bold claim… I mean if you could earn $500+ per day by doing something so simple then why isn’t everybody doing it?

Is My Home Success Plan a scam or can you really make money with it?

Those are exactly the things you’ll be finding out in this honest review, so if you’ve been thinking of trying out the My Home Success Plan program then be sure to stick around & read this post before you do.

What Is My Home Success Plan?

My Home Success Plan is a program which has supposedly been put together by a lady named April Matthews. She claims that just a few years ago she was struggling to make ends meet even though she was working very hard…

Then, one day she was apparently laid off from work & just before she ended up becoming homeless she “luckily” bumped into a man in her doctor’s office who worked online & he showed her how he made his money…

April claims that she implemented the same method the guy showed her & that she began making life-changing amounts of money whilst working part-time from the comfort of her own home.

So now she claims to have created the My Home Success Plan system to share the “secret” with others so that they too can easily earn lot’s of money without having to work hard & struggle to make ends meet.

It sure sounds like a nice story, and it’s almost convincing… As a newbie, it would definitely be easy to get caught out by something like this, but in reality, the whole thing is just a scam & I can say that so confidently right from the off because I’ve exposed this exact program several times before.

April Matthews is not a real person – it’s just a fictitious name & the images shown to you on the website of April & her children have just been taken off stock photo websites to make it seem believable. As you can probably guess, the entire story told by her is complete BS too.

The exact same program has been launched under various different names, such as Simple Income Strategies, Accelerated Income Program & Online Jobs Now. The reason they keep changing the name of the program is to try & escape the negative reviews that surface so that the creators can continue conning people out of their hard-earned cash.

They all feature similar “rags to riches” stories to try & pull you in but as you’ll soon see when I show you how it works it’s all total BS. The only real difference here with this new system is that they’ve changed the person’s name from Cynthia Sprinter to April Matthews… But don’t let that catch you out!

How Does My Home Success Plan Work?

You’re led to believe that once you hand over your money & buy into the program you’ll be provided with access to some sort of “link posting job” but this is total nonsense, there’s no such thing as a link posting job.

April Matthews states that all you’ll need to do is post links for various big-name companies & that they’ll pay you money for each one you post. She says they do this because you’re helping them market their business…

Again, as a newbie, this could potentially seem believable but take it from me things don’t really work that way.

Instead after handing over your money all you get access to is some VERY basic affiliate marketing training. Now I’ll first point out that affiliate marketing in itself is a legit (and actually very good) way to make money – but there is no way that the training provided through the My Home Success Plan program will help you get started.

They’re just feeding you a whole bunch of hype to get you to hand over your cash, then they just provide you with some training purely to try & prevent you from being able to get a refund. If they could get away with giving you nothing at all then they probably would.

And it doesn’t end there either because they then tell you to schedule a free phone “coaching session” but it’s not a coaching session at all. If you actually schedule a session then you’ll just get phoned up by one of their sales agents who’ll then try & convince you to part with thousands to get everything “done-for-you”.

Don’t fall for it – because it’s just more BS. If you hand over more money once again they’ll just fail to deliver on their promises & you’ll merely be left to feel even more disappointed (with even less money).

(If you want to see exactly what happens after you buy into it be sure to check out my Online Jobs Now review where I actually handed over the cash to try it out).

I mentioned above that affiliate marketing itself is indeed a legitimate & very good way to make money… And that’s absolutely true. The problem is just that the training provided through this particular program is so rubbish it won’t help you get started at all. Instead, it’ll just leave you confused, disappointed, and with less money than you started out with.

So basically affiliate marketing is where you “partner up” with companies online & get the opportunity to promote their products in return for commissions. For example, you could become an affiliate of Amazon, and if somebody clicked through your Amazon affiliate link & purchased something – you’d get paid.

It’s pretty straight forward & with proper training, it’s quite easy to make money with it (even if you’re a total newbie).

The good news is that if you’re actually interested in affiliate marketing then you can get all the proper training & tools you need to get started with it over at Commission Academy, which is a proven platform (and free to join).

But anyway back onto the My Home Success Plan system…

Is My Home Success Plan a Scam?

As far as I’m concerned yes, My Home Success Plan is certainly a scam. The whole thing is completely misleading & it’s clear to me that it’s only intention is to make its creators wealthy at your expense.

As I mentioned earlier in this review though if you do actually want to join a legitimate program that will show you how you can really make money through affiliate marketing then you should just check out Commission Academy instead. It’s there that you’ll find success.

So overall it’s safe to say that I won’t be recommending the My Home Success Plan system to you & hopefully after reading this review you can see why I’ve come to that decision. I also hope that this review helped prevent you from losing your hard-earned cash.

If you do still happen to have any more questions or comments then don’t hesitate to leave them below & I’ll do my best to get back to you as soon as I can.

2 thoughts on “Is My Home Success Plan a Scam? My Honest Review Uncovers The Truth”