Paid2Share claims to be the number 1 influencer network in the world & promises to provide people with an easy way to earn money. 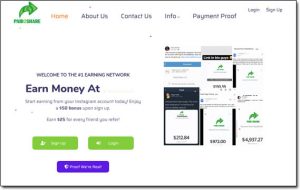 As a visitor, you’re led to believe that all you need to do to begin earning is simply sign up & refer friends.

They promise to pay you $25 for every friend that you get to sign up & on top of that they even promise to give you a whopping $50 welcome bonus just for signing up yourself.

Or is Paid2Share a scam?

Well, you’ll be glad that you came to this Paid2Share review before trying it out because I can immediately tell you that Paid2Share is NOT what it seems & that none of the members will ever get paid.

On top of that, they even claim to pay you $2 for every person that simply clicks on your link (even if they don’t sign up) and they promise to pay you $50 just for opening your account.

I think you’ll agree, that’s a lot of money, right?

Especially for doing something so simple & easy.

How can Paid2Share afford to pay out all of this money to people? How are they making their money? And if it’s real, then why isn’t everybody doing this?

Unfortunately, Paid2Share is not real & their claims are all made-up.

There are a couple of reasons I can say that so confidently.

The first reason is because I’ve actually already seen the Paid2Share scam in the past. It’s been previously launched under various different names & here are some examples:

And the second reason is because as an experienced online marketer myself, I can tell you that there’s no way the Paid2Share business model would allow them to be able to pay out so much money to members.

This means that if any money was coming into Paid2Share it would be coming solely from advertisements & there’s absolutely no way advertisements alone would allow for such high payouts.

The truth is that the promise of money offered by Paid2Share is a fake one & in the next section of this Paid2Share review when I explain how it all works you’ll see what’s really going on.

On the surface, Paid2Share is made to seem like a great opportunity.

What couldn’t be easier than sharing links with friends online & getting them to create free accounts?

And Paid2Share promises to pay you handsomely in return, with bold income claims of $25 per referral.

But all of those promises & claims are completely fake.

Paid2Share is just a scam. It’s a scam known as a viral data-harvesting scam.

Basically Paid2Share have created a fake opportunity that has been simply designed to trick people into signing up so that they can essentially collect their data.

But the trick is pretty cunning because it makes you believe that you’ll be earning money by referring friends.

The problem, however, is that you won’t really ever get paid any money. The promise of money is just a ploy for you to promote their scam for them & to recruit others.

You’re basically unknowingly doing their dirty work for them.

Admittedly, though, it’s pretty convincing. They’ve set it up in a way so that your account balance does indeed increase accordingly in line with your referrals.

It appears that you’re actually making money, and so this would encourage you to keep on referring more people.

But the problem is that the numbers are just faked, the money is not real & when you finally reach enough to “cash-out” you’ll just be left to discover Paid2Share is a scam.

What Are The Dangers?

The Paid2Share scam relies on the theory that most people use the same credentials (usernames, passwords, emails, etc) to sign up to every single website that they visit.

And it’s true, according to a poll around 59% of people do indeed use the same credentials for every account they create.

So basically the scammers behind Paid2Share are collecting a database of credentials in the hope that they’ll be able to sign in to other accounts that are associated with them.

This means that if you have indeed already signed up to Paid2Share prior to coming to this Paid2Share review & you did indeed do so using the same details you use elsewhere, then you should change those details ASAP.

And if you do find yourself using the same passwords for different websites then I would recommend the use of a password manager, such as Bitwarden which makes it easier to create (and manage) strong & unique ones.

I’d also recommend sharing this Paid2Share review with anyone that you might have already referred to their website too so that they can protect themselves as well.

Whenever I write a review exposing an opportunity like Paid2Share as a scam I always receive comments from people that still want to believe it is legit.

They don’t want to believe it’s a scam.

And that’s what scams like Paid2Share prey on. They want to make their opportunity sound so great so that you’ll want to just “try it” regardless of what others say.

So in an effort to prevent people from getting caught out like that, I have put this section together to expose all of the Paid2Share red flags that literally prove it’s a scam.

For a start, there’s the fact that it simply sounds WAY too good to be true.

As the old saying goes, if something sounds too good to be true, it probably as… And in this particular instance with Paid2Share, it definitely is.

Then on top of that, there’s the fact that I mentioned at the start of this Paid2Share review the scam has already been seen several times before in the past under various different names.

Here’s a list of some of those names again:

On top of that, however, there’s also the fact that despite claiming to be the “#1 influencer network” and “#1 earning network”, the Paid2Share website is only a little over 1 month old.

That means that the claims are completely fake & only an illegitimate website would use fake claims like that in an attempt to trick people into joining.

In a further attempt to trick people into believing the opportunity may be legit, Paid2Share have added a page which lists so-called payment proof from the members.

The problem, however, is that none of it is actually “proof” since none of the images shown on that page are actually verifiable.

Paid2Share have gone to the lengths of blurring or cropping out the usernames on all of the so-called “proof” images so that you cannot check whether or not they’re real.

And the only reason they would do that is because they are quite clearly not real.

One of the users shown in the so-called payment proof images was allegedly named “Megan Viola” on Twitter & after running a search myself & browsing through all of the accounts under that name, there were none that matched.

Paid2Share is definitely a scam, there’s absolutely no doubt about it. As you can likely now see after reading this Paid2Share review the evidence is simply overwhelming.

The whole opportunity is basically make-believe & it’s just a ploy to trick you into signing up to their website so that they can collect your data & use it for illicit purposes.

Worse, however, is the fact that they have set their scam up in a way so that it then tricks you into unknowingly promoting the scam for them & referring others.

The reality is that there are actually several legitimate ways to earn money online, but none of them are going to see you earning lots of money really quickly or easily.

If you want to make good money online then you must be prepared to put in the work required to make it happen. It’s not just going to fall into your lap.

The good news though is that if you are prepared to put in the work & do still want to earn good money then there are alternative opportunities such as affiliate marketing.

With affiliate marketing, you’ll be able to earn money by promoting products for third-party companies (such as Amazon) and the amount you can earn with it is totally uncapped.

If that’s something that interests you then you can learn more about it in my free guide right here.

But whatever you decide to do I just hope that my Paid2Share review here has helped prevent you from getting caught out by the scam & has given you a good insight into how it really works.