Bonus Junkies (found at BonusJunkies.co) calls itself the #1 influencer network in the world & claims it can enable people to earn as much as $500 to $1,000 per day. 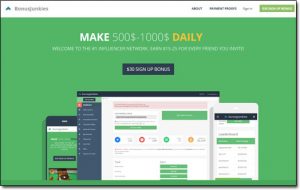 You’re led to believe that to earn money with the website all you need to do is sign up & invite friends.

They promise that they’ll pay you between $15 & $25 for every person that you get to join.

Well, I’m glad that you came here to my Bonus Junkies review before you signed up because I can immediately tell you that it’s NOT legit and that nobody who joins will ever get paid.

You’ll see what’s really going on (and how you can protect yourself from getting scammed if you’ve already joined) in my honest & detailed Bonus Junkies review below.

What Is Bonus Junkies?

Bonus Junkies is a website that promises to provide social media users with an easy way to make lots of money.

At least that’s what they tell you, anyway.

And they claim that because there’s no limit on the amount of people you can refer, you can supposedly earn as much as $500 to $1,000 per day with ease.

But the problem is that it’s simply not true.

None of the members that join Bonus Junkies will ever get paid.

I can say that so confidently because I’ve actually seen the Bonus Junkies scam in the past.

It’s what’s known as a “churn and burn” type of scam because the creators launch under one name, then shortly after they relaunch it again under another name in an attempt to escape the negative reviews people write exposing the truth about it.

The website is just a phoney & in the next section of this Bonus Junkies review, you’ll see what’s really going on & how the Bonus Junkies scam actually works.

How Does Bonus Junkies Work?

Bonus Junkies is what’s known as a viral data-harvesting scam.

They claim that if you sign up & refer friends, you’ll be able to earn money, but that’s not true.

In reality, all they’re doing is trying to collect data from as many people as possible (such as emails, usernames, passwords) & they’ve created a fake opportunity to do it.

You sign up in the hope of being able to make money, and by doing so, you’ve given them your data.

Then they tell you that the way you make money is by referring others, but the reality is that you’ll just be unknowingly luring others into the scam & promoting it for them.

Nobody who joins will ever get paid.

And that’s easy to see when you step back & look at the opportunity because there’s literally no money coming into the company to pay anybody with.

Everybody is simply signing up for free.

As a result, there’s simply no way Bonus Junkies could afford to pay anybody the promised amounts of $15 to $25 per referral.

They’ve just made up a fake number (and made it seem like a potentially lucrative opportunity) so that people will sign up just to “try it out”.

But the second somebody signs up to “try it out”, the Bonus Junkies scam has worked. They’ve got their data.

What they’re doing with the data is the worst part, though.

You see the scammers behind Bonus Junkies are relying on the fact that most people use the same credentials (email/username/password) for every website that they visit.

And it’s true, according to Sophos security they do.

So they’re simply hoping that you’ll sign up to Bonus Junkies using the same details that you use for other websites (such as Facebook, Twitter & PayPal etc).

They’ll then try to find accounts associated with your details, and if you did indeed sign up to Bonus Junkies using the same details then they’ll be able to break into them.

Further down this Bonus Junkies review, you’ll learn how you can protect yourself if you have indeed already joined.

In this case, it definitely is.

I can tell you as an experienced online marketer that there is simply no way the Bonus Junkies website could be earning enough money to pay people $15 to $25 per referral from advertising alone, as they claim they are.

But on top of that, there are several other red flags.

For example, there’s the fact that Bonus Junkies has already been seen under several different names such as Survey Junkies, Tap2Cash, Influencer Cash, Social Bounty, Use2Earn & many more.

There’s also the fact that despite claiming the be the #1 influencer network in the world, the Bonus Junkies website (according to a domain age checker) was only launched 14 days ago:

And on top of that, there’s the fact that Bonus Junkies lists its address as just “Houston, TX” and has absolutely no social media presence whatsoever.

Plus, coincidently, none of the “testimonials” shown on the homepage can be verified as the usernames of the account all happen to be misspelt & not hyperlinked.

So there’s a LOT of red-flags, to say the least.

The Bonus Junkies website features a payment proof page which has been put together in a clear attempt to try to convince you that the website is legit & really pays.

All of the so-called payment proof on that page is completely fake.

The reason I am able to tell that is because I ran a reverse search on the images using the Google reverse image search tool & the images were linked to other scam sites.

The images above show that one of the payment proof images shown on the Bonus Junkies website also appears on the CashInfluence & InfluencersEarn websites.

Those are 2 other known scams that I’ve previously exposed right here on this website.

The Dangers (And How To Protect Yourself)

The danger for people who have signed up to Bonus Junkies is that their other online accounts may be compromised.

You see, the people behind Bonus Junkies are basically hoping that you sign up to their website using the same details that you happen to use elsewhere.

They’ll then attempt to find other accounts associated with your details (such as Facebook, Twitter, PayPal, etc) and break into them.

So this means that if you have indeed signed up to Bonus Junkies using details that you use to sign in elsewhere then you should go ahead & change those details ASAP.

As an example, if you signed up to Bonus Junkies using the same details that you use to login to Facebook then you should head to Facebook & change your details there.

Providing your details are different, the people behind Bonus Junkies won’t be able to gain access to your account.

And if you’ve already shared Bonus Junkies with others then it’s also recommended that you share this Bonus Junkies review with them too so that they can learn how to protect their accounts as well.

Is Bonus Junkies a Scam?

The website is set out to do nothing other than steal your personal data so that the people behind it can attempt to compromise your other online accounts.

And as mentioned further up in this review, the scam has already been seen several times before launched under various different names.

The money Bonus Junkies promise to pay members is simply not real & therefore nobody that joins Bonus Junkies will ever find themselves actually getting paid.

It should be avoided.

Instead, if you really want to earn money online legitimately then I would suggest you look into affiliate marketing.

Through affiliate marketing, you’ll be able to earn good money by promoting products for 3rd party companies like Amazon online & it’s actually the same method I use myself.

If you’d like to learn more about it (or learn how to get started with it) then you can check out my free guide here.