Welcome to my PayPie review. This is one of the latest cryptocurrency ICO’s to launch & I have to admit that at a glance it looks fairly promising as PayPie is a company that plans to introduce the first-ever risk score assessment to the world of decentralized accounting. 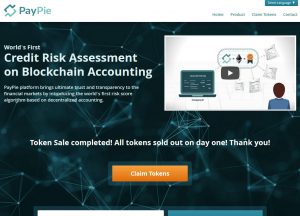 However as with all ICO’s, there’s still a lot of risks involved and naturally, people are asking all sorts of questions about the company such as how does it actually work, will it be a good investment & is PayPie a scam or legit?

So I’ve taken some time out to take a look at it myself & in this review, I’ll be sharing everything there is you need to know.

PayPie is essentially kind of a like a typical credit reference agency but designed for the world of cryptocurrency transactions – basically providing people with risk scores so that they can determine the risk associated with certain transactions, such as borrowing money for example.

The scores will be generated by computer algorithms & realistically they will work in a similar manner to the FICO scores that you’re probably currently familiar with in the world of “real” money.

So through PayPie companies (including banks, investors & individual lenders) will be able to check someone’s risk score & determine based on the score whether or not they believe it would be a good idea to go ahead with the transaction.

And whilst this in itself isn’t revolutionary, PayPie could definitely become very big because as mentioned above in this review it’s going to be the worlds first company to provide risk scores within the cryptocurrency markets – meaning initially it will, without doubt, be the go-to source for risk scores.

However obviously the main problem lies in the fact that essentially there’s nothing stopping anyone else from copying the company, so just like how again the real world of money we had the likes of Experian rivalling with Equifax & so on the same could happen here too. This means that whilst PayPie could be initially brilliant there’s nothing stopping anybody else from coming in & dominating the market themselves instead.

PayPie will be powered by the Ethereum blockchain & basically they plan on creating a decentralized public ledger to keep a record of all of the transactions that are made through the platform, then they will be able to use this ledger to determine risk by considering businesses historical transaction data.

Obviously, that is just a brief insight into as to how it roughly works, but behind the scenes, PayPie plan on using around 150 different data points to arrive at their final risk scores which will be consistently updated on a real-time basis. I would love to go into further detail on the exact data points but of course, PayPie hasn’t released a great deal of information on those in order to protect the integrity of their network & prevent fraud.

Ultimately though the idea is that PayPie will be able to make it easier for businesses by providing real-time risk information meaning businesses & banks won’t need to carry out duplicate tasks & they can speed up their credit approvals to make transfers even faster through the cryptocurrency network.

Speed, as you are probably aware of, is currently a BIG thing in the crypto-world & anything that is set to help increase it definitely carries an awful lot of potential which is why I’ve personally found PayPie to be extremely interesting.

Here’s a screenshot from their website which shows you the ledger: 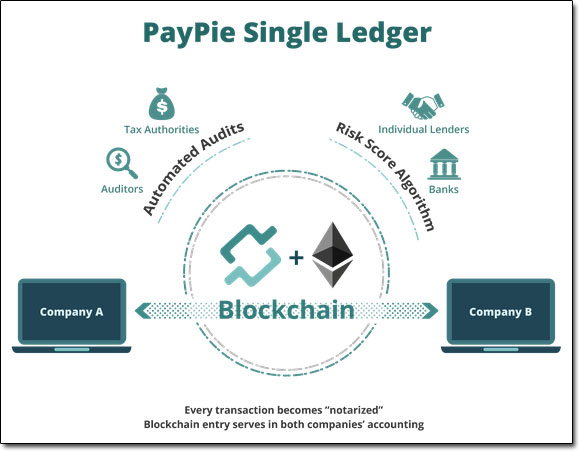 Is The PayPie ICO Worthwhile?

This past couple of weeks I’ve reviewed several ICO’s including some other big names like Electroneum, DragonChain & Ethconnect – however, none of them seem to have got people talking like PayPie has… It’s safe to say that it’s generated a LOT of interest indeed.

And yes, I agree with the chatter – in my opinion, PayPie could be huge, and it could certainly prove to be a worthwhile investment if you’re able to purchase tokens prior to the company’s public release.

But obviously, keep in mind that as with all investments you should only ever invest money you can afford to lose because ultimately whilst the company looks good who knows – there really is no way of telling which way it could go so realistically you could invest & see no return at all (just covering my a** here).

I think you’ll agree with me though in saying that there’s definitely going to be a demand for risk scores in the crypto-world & well that’s exactly what PayPie provides so personally I feel that yes, initially at least the company should do fairly well… However as I mentioned earlier in this review all it takes is for a competitor to come along & rival them to shake up the value of your investment.

And another issue is the technology – it all certainly sounds good in theory but it’s really going to depend on the practical application of the risk scores. Will they really hold up against fraud & will the algorithms be able to be fooled? Sometimes being first can be a good thing, but usually, it involves a lot of trial & error so there’s potential for a shaky start & if it’s too shaky… Well, who knows, again it might not be as successful as hoped.

As I mentioned above there’s a lot of ICO’s launching lately, some of which are legit & sadly some of which aren’t, but in this instance I can confirm that PayPie is indeed a genuine company with a legitimate investment opportunity – the PayPie scam rumours have most likely been started by people who don’t really understand the company or are purposefully trying to damage their launch (aka competitors).

It is always fair to ask the question though because as with anything where money is involved it’s a good idea to always do your due diligence & after reviewing literally hundreds of different opportunities on this blog I can tell you that unfortunately there are quite a lot of scams about.

As of late many of those said scams seem to be specifically targeting the cryptocurrency world too because many more people who are new to investing are jumping on the hype of it & the scammers are looking to take advantage of that. Crypto Cash Pool, USI Tech & 10xBitcoin are just a few of the scams I’ve uncovered this week alone & I predict that they are going to keep coming & coming, so stay wary.

Therefore to conclude this review I’m going to say that PayPie isn’t a scam and that I actually feel that it’s quite an interesting investment opportunity, but as I mentioned throughout this review it does come with a few risks that should be taken into account. Don’t just jump in & invest on the basis that it’s the first of its kind as realistically that’s not always the best thing, but if it runs without hiccups then it certainly could be profitable for those that get in early.