The brand new Profit Point Autonomy system promises to give you access to a so-called “virtual money machine” that’ll allegedly be able to see you earning as much as $500 per day online with ease, even if you’ve never previously made so much as a single penny online before… 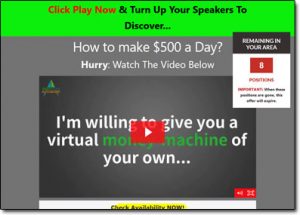 However whilst this all sound fair and well, in order to actually get access to the system you’re firstly required to hand over $47+ of your own hard-earned cash which when coupled with those bold income claims makes the whole thing sound rather suspicious.

So is it actually legit? Or is Profit Point Autonomy a scam that’ll just see you getting suckered out of $47 (and potentially more) and getting nothing back in return?

Well, thankfully you decided to do your due diligence before signing up & landed here at my Profit Point Autonomy review because I’ve personally looked into this system and I can tell you right from the off that it is NOT what it seems.

What Exactly Is Profit Point Autonomy?

The Profit Point Autonomy system basically portrays itself as being an automated system for making money online & you’re led to believe that upon signing up you’ll be able to earn as much as $500 per day with ease, even if you’re a total newbie.

In fact, the creator of the system states in the video (as shown below) that it’s literally as simple as “just pressing a button”:

But could it be true – could you really earn $500 per day online just by pressing a button?

Well the short answer is no, you can’t – and I imagine that deep down you probably already knew that.

I mean yes the internet is wonderful & it certainly does provide many legitimate ways that people can make money however it is not magical & it is not going to see you earning hundreds of dollars per day just by pressing a button.

And the reason I know with 100% certainty that the Profit Point Autonomy system doesn’t work is because I’ve already exposed it twice before under the names Money Sucking Websites & Website ATM.

You can see that all of the systems are interlinked because they all reside on the same domain as shown below: 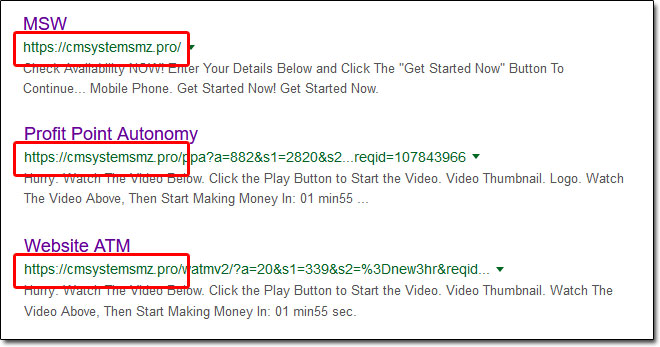 The person behind it simply keeps changing the system’s name in an attempt to escape the negative reviews that get written about it so that he can continue tricking people into signing up & earning money at their expense.

You see in reality the Profit Point Autonomy system is just a get-rich-quick scam in that it promises to provide you with an easy way to make money, asks you for money first, and then fails to deliver on its promises once you’ve done so.

This means you just get left out of pocket & don’t really get provided with any legit way to make money, as you’ll soon see for yourself below when I show you how it all really works…

How Does The Profit Point Autonomy System Work?

Basically the Profit Point Autonomy website is just full of false hype & misleading claims, and whilst it leads you towards believing that you’ll be getting access to an automated way for making money in reality that is far from the truth.

Instead after you hand over your money all you’ll find yourself really getting access to is some extremely basic training on something known as affiliate marketing.

Now don’t get me wrong here, affiliate marketing in itself is actually a legitimate way to make money online & it’s a very good one. It’s actually the same way I personally make most of my own money online.

The problem, therefore, doesn’t lie with affiliate marketing, it lies with the poor training (and misleading claims) put out by the Profit Point Autonomy system which will just leave you feeling stuck & frustrated.

You see whilst affiliate marketing does indeed work (and whilst it can provide you with an uncapped income) the problem is that you can’t just “push a button” and make money with it, it’s impossible.

Instead, if you want to find success with affiliate marketing you must be prepared to put in some work to make it happen, and you must also be patient because it can take some time to happen…

But it is definitely worth putting in the work & being patient because affiliate marketing is a great way to make money & there are many legitimate places like Commission Academy where you can get started with it properly.

So as an example let’s say you signed up as an affiliate of Amazon (which is free & possible to do) this would mean that you’d be able to promote any of the products from their website using a special link.

If somebody clicks through your link & buys something, you get paid.

Here’s a visual to make it even simpler:

And like I mentioned a little bit further above you can actually get started with affiliate marketing for free over at Commission Academy (which is a legitimate place with high-quality training & access to a community of people).

Plus I’ve also put together my own free guide on starting a website & making money as an affiliate here.

But back onto the Profit Point Autonomy system…

My Verdict – Is Profit Point Autonomy a Scam?

After working online full-time for several years myself as an affiliate marketer I can tell you with 100% certainty that in my opinion the Profit Point Autonomy system is a scam & it is a system that I would avoid.

I mean sure, from a technical standpoint the creator has “covered his butt” by giving you access to “some” training on the inside, but the training, in my opinion, is simply nowhere near good enough to help you see real success.

If you really want to see good success & earn good money with affiliate marketing then you should learn via a proven platform such as Commission Academy, not via some gimmicky program that makes overly hyped claims like the Profit Point Autonomy system.

The whole thing is basically just a ploy to trick you into handing over your money so that the creator of it can get wealthy at your expense. He hasn’t really built it with you in mind & there’s no way that making money could ever be that easy.

It’s all just lies to part you with your cash, and when you do the creator of it will simply make it very difficult for you to get it back.

Don’t get me wrong though it is indeed possible to earn hundreds of dollars per day with affiliate marketing, in fact, the amount you can make with affiliate marketing is completely uncapped (which is why it’s so great)… It’s just that it’s not going to be as easy as “pushing a button” like the Profit Point Autonomy system claims it will.

Instead to see success with affiliate marketing you are going to have be prepared to put in work & to be patient because it could take 2, 3 or even 6 months before you start getting your first commissions coming through.

However like I say once you do begin earning with it then it is simply a case of scaling up & you can grow your income to 4, 5 and even potentially 6 figures (or more) per month. It truly is uncapped.

Alternatively, you can also check out these other great ways to earn money online too.

But whatever you decide to do I just hope that my review of the Profit Point Autonomy system here has given you a good insight into how it really works & hopefully, it has helped you to save some money.

If you have any further questions or comments don’t hesitate to leave them below. 🙂