ShareCash claims to be the number 1 influencer network & promises to provide you with an easy way to be able to make as much as $500 per day online, even if you’re brand new. 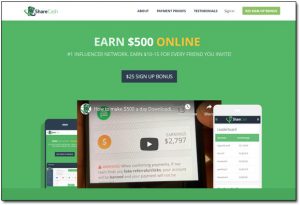 You’re led to believe that all you need to do is simply sign up, copy your referral link & then invite others in order to earn. When they join, you’ll be paid $10 to $15…

Or at least that’s what you’re told.

But is ShareCash actually legit & does it really pay? Or is it just a scam that you should avoid?

Well, the good news is that you’ve landed in the right place to find out because in this ShareCash review I am going to be uncovering everything you need to know (and outlining why you should avoid it).

As I briefly touched on above, ShareCash is a website that claims to be the number 1 influencer network in the world & it promises to provide a way for people to earn as much as $500 per day online with ease.

All you need to do to earn with ShareCash (allegedly) is sign up, share your link & then refer others.

And they claim that they’ll pay you a whopping $10 to $15 for every member that joins via your link.

But there’s one immediate problem that springs to mind here… Which is that if everybody is joining for free, then how on earth can ShareCash afford to pay out so much money?

In short, they can’t…

And the reason I can say that so confidently is because I’ve already exposed the ShareCash scam several times before right here on this blog when it was launched under different names.

Some of its previous names include Tap2Cash, Influencer Cash, Survey Junkes & OG Bucks.

If you check out my reviews of those programs you’ll quickly see that those websites are almost identical to that of the newly launched ShareCash scam website.

The person who’s behind the scam simply keeps on changing its name in an attempt to escape the negative reviews that surface so that he (or she) can continue tricking people into joining.

But I know what you’re probably wondering now…

If it’s free to join ShareCash, then how could it possibly be a scam? After all, you can’t get scammed if you don’t hand over any payment details or anything, can you?

Well, the reality is that yes, you can – and you’ll see how in the next section below as I explain in greater detail exactly how it all works.

ShareCash actually used to be the name of a legitimate website that paid users for sharing files online… But in early 2020 it closed down, and the ShareCash scam website launched in its place.

And the new scam website is basically what’s known as a data-harvesting scam.

This means that essentially, their entire opportunity is fake. They’re just pretending to provide a money-making opportunity to trick people into signing up so that they can get their data.

You see, it’s a fact that the majority of people use the same credentials to sign in to every website that they visit & this is exactly what the ShareCash scam is preying on.

They’re simply hoping that you’ll sign up to their website using the same details that you use at other websites & if you do, they’ll then attempt to break into your accounts.

You see, as a member of ShareCash, you’re told that you can earn money by referring others – but it’s not true. They’re just tricking you into luring others into the scam.

And unfortunately, they’ve managed to trick quite a lot of people because they’ve set their system up so that your account balance does indeed increase accordingly as you get new referrals.

The problem, however, is that the balance is fake – it’ll never get paid.

So whatever you do, don’t waste your time with ShareCash – and certainly don’t refer other members.

Put it this way – if you could really earn $500 per day so easily just by sharing links online then everybody would be doing it, nobody would be left working at a job.

I mean yes, it is indeed possible to earn money online but to make good money it takes a good amount of work, just like anything in life. Nothing worth having comes easy.

Then, on top of that, as mentioned further up in this ShareCash review, I’ve already seen this scam several times before launched under various different names such as OG Bucks, Survey Junkies & PulseBucks.

If you check out my reviews of those websites you’ll see that they’re almost identical to the website of the ShareCash scam. It’s just the same thing but under a new name.

And finally, if you take a look at any of their posts on their social media accounts, you’ll see a bunch of angry members complaining that they’ve been scammed as shown below: 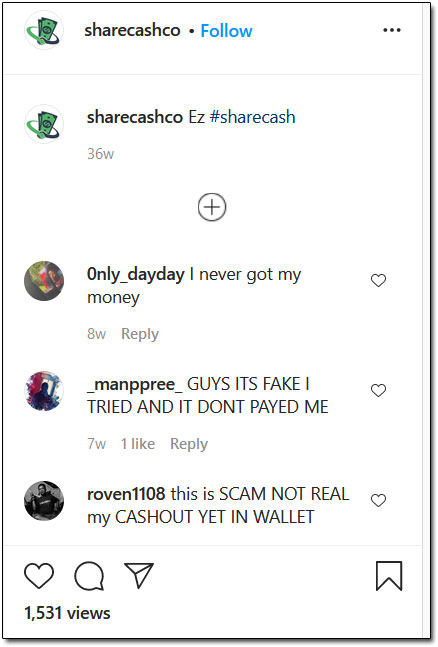 How To Protect Yourself If You’ve Joined

If you’ve already joined ShareCash prior to coming across this review then you’ll probably be wanting to know how you can protect yourself from getting scammed.

Well, the good news is that if you joined ShareCash using a different password that you don’t use anywhere else (as you should do at every website), then there is no need to worry.

You may receive spam emails, but the people behind ShareCash won’t be able to break into your accounts.

If, however, you joined ShareCash using the same password that you use at other websites then you should head to those other sites & change your passwords there ASAP.

It’s also a good idea to end your logged-in session on all devices, just in case they’ve already logged in before you changed the password (so that they can’t continue to access your account).

Once you’ve done that, you should be safe… But in future, it’s a good idea to always use a strong (and different) password on every site that you visit, to prevent this from happening.

You can simply use a password manager to easily manage them all.

There’s absolutely no doubt about it, ShareCash (found at sharecash.co) is definitely a scam. The whole website has been built upon nothing but lies & deceit.

The aim of the ShareCash website is to trick you into signing up & referring others so that they can get your data & get the data of the people that you refer.

They’ll then use that data to attempt to hack into third party accounts, such as PayPal accounts, social media accounts, etc… So it’s safe to say that ShareCash should be 100% avoided.

Instead, if you still want to earn money online I would suggest that you stick with a legitimate method from my top picks page.

And I’ll also point out here that my all-time top recommended method for earning online is something named affiliate marketing which basically involves you promoting products or services for third party companies.

The reason I like affiliate marketing so much is that it’s relatively easy to do, even if you’re a beginner, and the amount that you can earn with it is completely unlimited.

It’s also the same way that I personally make most of my own money online, too.

But whatever you decide to do, I just sincerely hope that my review of ShareCash here has given you a good insight into how it really works & hopefully it’s helped you to avoid it.

If you do still happen to have any further questions or comments then don’t hesitate to leave them below.