The Wiseball Secret Society website claims to expose a money-making loophole, a loophole that can supposedly earn you upwards of $1,000 per day online without you having to actually do anything. 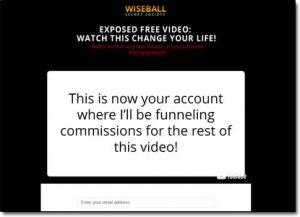 But is it really legit or is the Wiseball Auto Money System a scam that’ll just end up parting you with your cash?

It probably comes as no real surprise when I say it looks more likely to be the latter, but thankfully you’ve landed in the right place to find out for certain as I’ve done the digging & in this Wiseball Secret Society review I’m going to be sharing everything there is you need to know.

What The Wiseball Secret Society?

The Wiseball Secret Society system claims to exploit an online money-making loophole & a lady who’s allegedly named Kathy Graham says on the website that she will help you “plug into” the loophole yourself so that you too can start making money from it.

And this system doesn’t just claim to help you make any old money, oh no – this system claims it can help you to almost immediately start earning upwards of $1,000 per day, all without doing any work at all.

I think you’ll agree with me when I say that that’s a pretty outrageous claim – I mean sure the internet is a fantastic tool & there are many opportunities to make money with it but it’s not magical & there is no way to make that kind of income without doing anything.

If there was then everybody would be doing it – nobody would be left working a job. It’s simply not possible & you should immediately be wary about anything that claims it is because it’s likely a scam.

Which is exactly what the Wiseball Secret Society is, a scam. The reason I can be so certain about that right from the off (aside from the outrageous claims) is that I’ve actually seen this exact scam before.

It was previously launched under the name of the Auto Money System & if you check out my review for that you’ll soon see that the 2 websites are almost identical – the only thing that has changed is the name.

This isn’t uncommon for a scam – basically, they launch, then they get exposed on several different review websites & so they decide to later relaunch under a different name to continue parting people with their hard-earned cash. A prime example is how the Two Dollar Click system turned to Three Dollar Click, then Four Dollar Click and so on…

It’s just a ploy so that they can try & keep the scam going for as long as possible without getting caught, and without people knowing that it’s actually a scam. Anyway, you’re probably interested in how it actually works…

How Does The Wiseball Secret Society Work?

Honestly, this scam is actually pretty straight forward. As I mentioned above it’s an exact replica of the Auto Money System scam that was floating about last year & it’s basically just a typical get-rich-quick program.

The system promises you the world & makes it seem like you’re going to start making lot’s of money really easily & almost right away. The person presenting the video (who is allegedly named Kathy Graham) even tells you that she is setting up your account literally as you watch the video.

Of course, though this is total BS. They’re trying to make it seem like the video is being presented to you live to rush you through the process but it’s not & if you simply refresh the page you’ll quickly find that out.

You’re also told that there’s very limited availability & that once all the spots are gone, they’re gone. This is is also not true… Like I say this same scam was around last year & now here it is still running. If you come back to this website next week you’d see the exact same thing, there isn’t limited availability at all.

The only reason they say all these things is to rush you into purchasing the system & the reason they want to do this is to make you think that you don’t have time to look around for Wiseball Secret Society reviews. That’s because they know that if you do you’ll find out that it’s actually a scam.

So hopefully you came to this review before joining!

Essentially after handing over your money you’re just provided with some useless training on making money online. The method taught by the training is affiliate marketing (which is actually a legit way to make money) however the training is so rubbish that it’s unlikely you’ll make as much as a single penny.

Then, surprise surprise once they’ve got your money they’ll be extremely reluctant to give you a refund… In fact, they’ll make it nearly impossible.

However, there is a small bit of good news here. The Wiseball Secret Society system actually uses a third party merchant to process payments named Payzeno. This means that whilst the creators of the Wiseball Auto Money System will likely reject your refund request if you email Payzeno directly you should hopefully be able to get your money back.

Is Wiseball Secret Society a Scam?

I can say with 100% confidence that the Wiseball Secret Society program is indeed a scam. It’s clear to me that this program has been designed purely to make the creator wealthy at your expense – it’s not legit.

The system does nothing other than false promises, and after handing over your money you’ll simply be left to find out that it doesn’t really work & that you can’t really generate the kind of money they promised you. To be honest you’ll be lucky to manage to generate a single penny through the Wiseball program because the training you’re provided with really is that poor.

Whilst the method itself is sound (affiliate marketing) the training is not, and there are actually alternative places where you can get much better training for free such as Commission Academy for example which I have ranked for a long time as being a very good program.

So overall as you can probably guess I won’t be recommending the Wiseball Secret Society or Auto Money System to you because they are just complete utter scams that are designed to take your money. If you do happen to have any further comments or questions don’t hesitate to leave them below.