Easy Survey Jobs calls itself the “most popular online to earn cash & rewards for sharing your thoughts” & it leads you towards believing that you’ll be able to earn BIG money by filling in a few simple surveys each day. 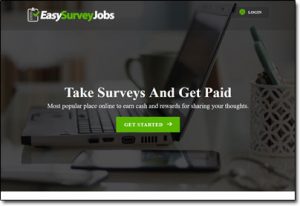 But paid surveys are well known for being low-paying & as a result, I generally don’t recommend them because I believe there are better alternatives available.

Well, you’ll be glad that you came to this Easy Survey Jobs review before signing up because I can tell you right here from the off that it’s NOT quite what it seems.

What Is Easy Survey Jobs?

Easy Survey Jobs portrays itself as a paid survey site & as I briefly touched on above it leads you towards believing that you’ll be able to earn BIG money in return for your time, which is typically unheard of when it comes to paid surveys…

Most paid survey sites will only see you earning a dollar or so per day (at most!) and often it’s actually much less than that… So whenever I hear of a survey website suggesting that you could potentially earn a full-time income from them I get extremely suspicious…

After all, there are many paid survey scams in existence and I have exposed many of them on this blog already such as Take Surveys For Cash, Paid Surveys Online – and one that sounds extremely similar to Easy Survey Jobs named My Survey Jobs.

So is Easy Survey Jobs just version 2 of My Survey Jobs? Has the creator just switched up the name in an attempt to escape the negative reviews so that he can continue parting people with their hard-earned cash?

Well not quite – I mean the two may definitely be linked, and Easy Survey Jobs is definitely NOT what it seems as you’ll soon see when I explain how it works below, but the two websites do work a little differently…

How Does Easy Survey Jobs Work?

So like I said in the previous section of this review, Easy Survey Jobs essentially claims to be a paid surveys website – but in reality, it’s not… It’s actually just a “middleman” website that connects you with paid surveys & makes money from you.

Easy Survey Jobs does not directly provide its members with any surveys, instead, it just passes you on to third party survey websites which the creator is affiliated with so that he/she can earn commissions when you sign up.

This means therefore that the claims on the website are over-hyped in an attempt to push you into joining the sites. Paid surveys are still typically low-paying & there is no way that you’ll be able to earn a full-time income from paid surveys alone like Easy Survey Jobs leads you towards believing.

Instead, if you want to earn a full-time income online you’d need to do something like affiliate marketing…

And the truth is there’s really no need to join a site like Easy Survey Jobs to find paid surveys because you can easily get access to paid survey sites elsewhere without having to give away any details.

For example, you could check out my own list of paid survey sites right here if you’re really dead set on paid surveys… But like I say, I don’t personally recommend them anyway because I believe there are better alternatives available.

But alongside that, I have some other concerns about Easy Survey Jobs…

My Concerns About Easy Survey Jobs

Well, my first concern is one I just touched on, which is that there is simply no need to give out your details to get access to paid survey sites – and the creators of Easy Survey Jobs are only asking for them so that they can later push more potentially dodgy stuff to you.

My second concern though is with the biased nature of how the survey sites are listed. I mean the Easy Survey Jobs website claims to list the highest paying ones, but I don’t believe them – I believe they’re just listing the ones that are paying THEM the highest commissions.

My third concern is the fact that the claims are extremely misleading. Easy Survey Jobs claim that some of the surveys accessed via their website pay up to $500 per survey but I have never, ever heard of that in my life & if it is the case then it certainly won’t be your typical survey which they fail to mention.

And lastly, my other concern is that Easy Survey Jobs claims to provide you with free access to survey sites however on the inside in their member’s area they mention about upgrading to different levels which costs money. There’s no need to pay for access to paid surveys but there’s certainly no need to pay to access them.

If you’re really set on paid surveys do yourself a favour, avoid Easy Survey Jobs & just check out my list of paid survey sites here… Or even better yet choose one of these more rewarding alternatives instead.

And with that being said…

Is Easy Survey Jobs a Scam?

Well, that’s a difficult one to answer really because yes, it does indeed provide you with some legitimate paid survey sites however I’m concerned about the real intentions of the website which appears to just be to make money from you rather than actually help you.

I mean yes, websites do need to make money one way or another put the visitors best interests should always be put first. In the case of Easy Survey Jobs, the creator appears to be using trickery & hyped-up claims which almost makes me lean towards calling it a scam.

Plus there’s also the fact that creator appears to be pushing people towards paying money to “upgrade” to get access to more surveys which there simply isn’t any need to do because you can access them for free without entering any details at all right here.

The bottom line though is that either way whether you want to call it legit or not I won’t be recommending it because I don’t believe it will help you and, to be honest, I don’t really recommend paid surveys anyway because I believe there are better alternatives available.

One of those alternatives is something called affiliate marketing which is actually the same way I personally make most of my own money online & it’s one of my all-time top recommendations for people who are looking to build a good income online.

The best thing is that you can actually get started with it (and learn more about it) over at Wealthy Affiliate for free so it’s definitely worth checking out.

But whatever you decide to do I just sincerely hope that my review of Easy Survey Jobs here has given you a good insight into how it truly works & helped you see why it might not be such a good idea to join it. Feel free to leave any comments or questions below. 🙂