The brand new Income Magnet system (found at copyhissuccess.com) has allegedly been put together by a man named Dan Redding & it claims to provide you with access to an easy method for generating hundreds of dollars per day online just by using your voice… 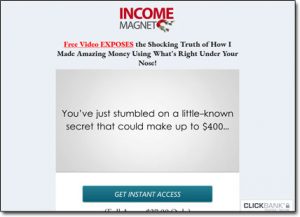 Dan claims that literally all you’ll need to do is read from a script & that you’ll be able to begin making money immediately – but is it really legit & can you truly make so much money from this? Or is the Income Magnet system a scam that’s really just set out to get your cash instead?

Thankfully you’ve landed in the right place to find out as I myself have personally take a closer look into the whole thing to see what it’s about & in this honest Income Magnet review I’ll be uncovering the REAL truth about how it all works as well as outlining whether or not you can really make any money with it. So keep reading to find out more!

What Is Income Magnet?

That “secret” is your voice – as he claims that his system is going to provide you with some sort of revolutionary method that will enable you to start earning hundreds of dollars online just by talking.

However admittedly it takes him a long time to get that point in the video that he’s put together and other than a brief mention of using your voice to make money the video doesn’t really explain much else about how it’s all supposed to work.

But what I can tell you here right from the off is that those are all tactics of a get-rich-quick scam. If something promises that will be able to make you lots of money but doesn’t really explain how it works & then asks for money to get started, it is likely a scam.

I expose these types of things all the time & earlier today I actually exposed another system named the Greedy Mentor system which is very similar to this one in terms of all the promises it makes.

But is there actually any substance behind the Income Magnet system & can you really make any money at all with Dan’s “secret” voice method? Let’s take a closer look into how it all works to find out…

How Does Income Magnet Work?

Well in short the truth is that the Income Magnet system doesn’t really “work” at all. I mean sure, it does give you access to some basic training on making money by working as a voice-over artist online but honestly there are no “secrets” shared inside like Dan claims & the chances of you making as much money as he promises are very slim indeed.

For example, I could tell you that if you want to get started as a voice-over artist & make money in your spare time then one of the best places to do it is a place called Fiverr… And on top of that you could also try Freelancer too as voice-over artists are often hired on that website as well.

Below is an example of some of the people selling their voice-over gigs through Fiverr at the moment:

But it doesn’t matter where you start, it is not easy to “get rich” or make money quickly as a voice-over artist.

It is just like selling any other service online… It takes time to build up your business & to find clients, and it’s especially difficult when you’re brand new because you won’t have many testimonials or reviews to back you up.

I should know because I actually worked as a freelancer myself for quite some time. You can certainly make good money doing it but it’s very challenging to get work since you’re fighting against so many people online & the only way to get work as a newcomer is to offer your work at a super low cost which means you’ll end up working long hours for very little money.

In short freelancing (as a voice-over artist or anything else) is not as great as it might look on the outside – at least not unless you manage to get yourself properly established anyway, which could take several years.

I Found There Was a Better Way To Make Money

Like I mentioned above, I myself used to freelance & whilst I made money from it I didn’t really enjoy it because I was working lots of hours for little reward & so it became pretty stressful… But I eventually stumbled across something better.

The thing I stumbled across was something called affiliate marketing & whilst similarly just like freelancing it is not something that is going to make you rich overnight, the good thing about it is that the income you generate with it can actually become passive.

So whereas when I was freelancing I would only make money when I was working for people, with affiliate marketing I’ve managed to build up an income of $10k/month and the income will still keep coming in even if I slow down working.

I know it might sound like a crazy concept especially if it’s new to you (it did to me as well back then) but there are plenty of places where you can learn more about it & get started for free, like Commission Academy (which I highly recommend checking out).

In short that’s exactly what the Income Magnet system does, it over-hypes the opportunity of making money & then after handing over your cash (which I don’t recommend doing) you’re just left to find out the hard way that it under delivers on the other side.

You do get access to some training as promised but there is just literally no way you’re going to see yourself earning the kind of income that Dan promises you will in the sales video pitching the whole thing.

Essentially he’s just trying to trick you into buying it so that he can earn himself some money at your expense – he doesn’t really care about your success & as you’ll see in a moment Dan Redding isn’t even real!

Some Big Red-Flags With This System

Well one of the biggest red-flags is that like I just mentioned in the previous section of this review Dan Redding (the guy who’s supposedly created the whole thing) isn’t even a real person.

As shown below there’s a disclaimer on the Income Magnet system’s website that says Dan Redding’s name is just a pen-name:

But why would the true creator of such a system be worried about his name getting out if he was really helping people to earn good money like he claims he was?

The answer is because he’s likely not, and when you see all the other potential scams associated with the Income Magnet system you’ll quite easily see why the creator has chosen to hide his name.

I just did a search for “copyhissuccess.com” which is the website that the Income Magnet system is hosted on & as shown below the Google results showed that several other systems I exposed as scams are also hosted there too: 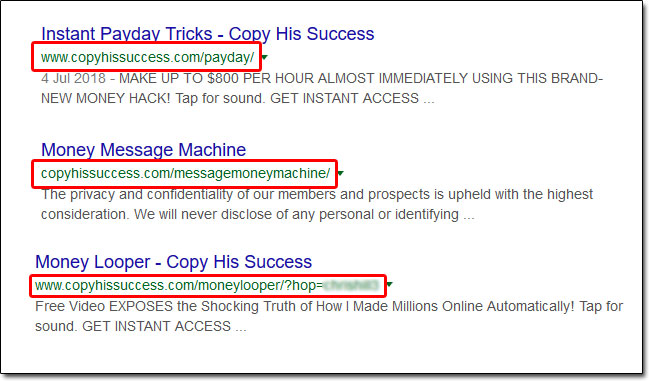 They include the following:

And all of those systems make very similar promises so it seems to me that the creator is just regularly changing the names of his system in an attempt to escape the negative reviews so that he can continue parting people with their hard earned cash.

Is Income Magnet a Scam?

This is a bit of a tricky question to be honest. I mean yes, as promised the Income Magnet system does indeed give you access to some basic training on how you can start making money by working as a voice-over artist online, however in my opinion it’s all very misleading.

I believe what you’re being sold on & what you’re actually getting are two different things & therefore I believe the true intention of it is just to make the creator wealthy at your expense rather than making you wealthy like it promises.

Plus like I mentioned earlier in this Income Magnet review if you’re really set on making money as a voice-over artist you could just check out Fiverr which is a site where it’s easy to get started doing exactly that.

But like I also mentioned earlier in the review freelancing can be pretty darn stressful & as far as I’m concerned there are much better ways to make good money online like affiliate marketing which I spoke about – so I recommend you check out my guide on that here instead.

Either way though whatever you decide to do I just hope that my review of this system has given you a good insight into how it actually works & why I believe it should be avoided… But if you do happen to have any further questions or comments then don’t hesitate to leave them below.